The river: A history of Brisbane

Opened in 2003 on the ground floor of Brisbane City Hall, the Museum of Brisbane, to quote its mission statement, âfocuses on the identity of Brisbane; the place, its history, people and culture, every dimension of its past, present and futureâ. Two moves in a short time have presumably made it hard to remain focused: when City Hall closed for an elaborate restoration in 2010, the museum was sent into exile up the road. Returning lately to its old home, it has been bumped upstairs to the third floor: less obvious to passers-by, but happily near the entrance to the clock tower. The latter was once Brisbaneâs tallest structure and is equipped with Australiaâs oldest manually operated cage lift. The tower remains an attraction for those in the know, and continues to draw visitors to City Hallâs upper levels.

The museumâs spaces have been designed for the purpose, with five flexible galleries well suited to small to medium travelling or temporary exhibitions, and a small theatre and function area, both available for hire. The three temporary exhibitions on show when I visited in August 2014 were all faithful to the museumâs Brisbane focus: The Many Lives of Moreton Bay, sponsored by the Port of Brisbane, which tells something of the history of Brisbaneâs nearby islands and their inhabitants; a series of Moreton Island landscapes by Archibald Prize-winner Euan Macleod; and a tribute to David Malouf (who probably cringed to see himself described as âBrisbaneâs greatest literary iconâ) by five artists who have been inspired by his writings.

A fourth exhibition, The River: A History of Brisbane, has a more permanent feel, and is currently scheduled to continue to 2016. It occupies a long corridor running along one side of the exhibition spaces, with a breakout in the middle. This narrow space is perhaps appropriate for the theme, but it makes viewing difficult if there are more than a few people in the corridor; and captions in small font at varying heights make it a challenge for the short of stature, as well as the long- and short-sighted. 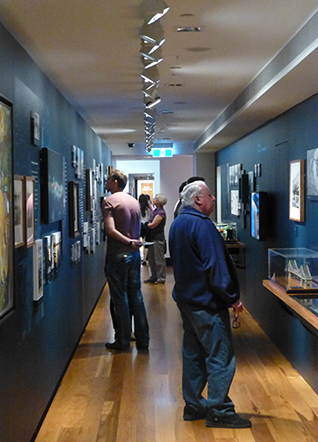 The corridor in The River: A History of Brisbane
photograph by Stephen Foster

The exhibition begins with an introductory film on a 10-minute loop tracing life and landscapes along the Brisbane River from its bucolic headwaters to its mouth on Moreton Bay, a distance, we are told, of 124 kilometres (presumably as the crow flies, for the riverâs serpentine course is much longer). The story continues through a series of six themes â âBeautyâ, âCrossingsâ, âWithin reachâ, âEmbraceâ, âShaping forcesâ, and âWatershedâ â which serve well enough as an organising principle.

The objects are predominantly two-dimensional: photographs, paintings, tourism posters, the occasional map or plan. Three-dimensional material includes souvenirs, local ceramics, models of boats and bridges, and timber and wire piping âc1860â. Some items are drawn from the City of Brisbane Collection of more than 5000 objects, of which the Museum is custodian. 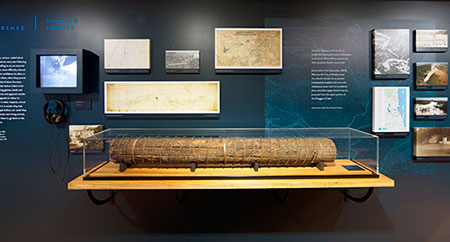 Part of the âShaping Forcesâ theme in The River exhibition. Featured in this image is a staved water pipe (about 1860) made of brushbox timber and wire, joined together and treated with a bitumen-like substance
photograph by Carl Warner, Museum of Brisbane

Brisbaneâs first inhabitants are portrayed in an intriguing series of photographs from various sources, including Queenslandâs state library, art gallery and museum, and the British Museum. I wonder why some of the portraits were taken at the Maroochy River, more than 100 kilometres to the north â perhaps the subjects were from the same language group as the Aboriginal people in the Brisbane area, but either way we need to be told.

There is a twin-screen installation presenting a chronology of the river against rippling waters, which moves as slowly as the tides and, as is so often the case with media exhibits, doesnât justify the space it occupies.

The exhibition as a whole is more evocative than informative. The introductory film sets the tone: as we sped downstream, I noticed just one lonely cloud and not a drop of rain, confirming the perfect image Queensland presents of itself. While the storyline confirms that the river was once neglected, the view of Brisbane-dwellersâ relationship with their river is essentially uncritical. There is no mention, for example, of the impact of the Riverside Expressway, which opened in the mid-1970s and put a visual and physical barrier between the CBD and about two kilometres of the riverâs northern bank. Nor do we hear about the demolition in 1979 of the elegant and historically significant Bellevue Hotel, infamously perpetrated, by order of Premier Joh Bjelke-Petersen, in the middle of the night to avoid public protests. 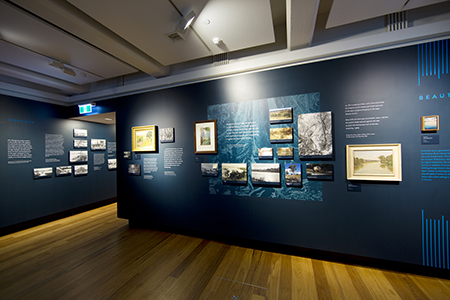 Visitors enter the exhibition via the first theme, âBeautyâ
photograph by Carl Warner, Museum of Brisbane

Likewise, the exhibition gives little attention to natureâs ravages. Although an eloquent text panel refers to âthe fluctuating power struggle between the River and those living in its vicinityâ, visitors will struggle to learn much about the extent, frequency and impact of floods. The 2011 floods scarcely rate a mention, notwithstanding their devastating impact on life and property (35 dead and nearly 12,000 homes inundated). Visitors might reasonably expect some hint of the controversy that followed this cataclysm and, at the very least, a map showing the extent of the river at its peak. Brisbane residents, including home purchasers, seem quickly to forget the impact of periodic flooding. This exhibition does little to help them remember.

The amount of text throughout the exhibition seems about right. But it lacks coherence. While the introductory panels are generally engaging and well written, many other panels and captions are copied from miscellaneous sources, including 19th-century newspapers and journals, recent historical publications, official reports and other obscure sources, sometimes ambiguously cited and poorly explained. For example, how many visitors will understand that the Victoria Bridge Board, when linking the opening of the new bridge in 1897 to âthe great Historical occasion which is to-day being celebrated in every quarter of the Globeâ, is referring to the Queenâs Diamond Jubilee? While most of the text reads well enough and makes sense, the overall impression is one of cut-and-paste captioning. I suspect this is a result of lack of resources rather than absence of curatorial will. As every curator knows, writing quality captions for exhibitions takes a lot of time. 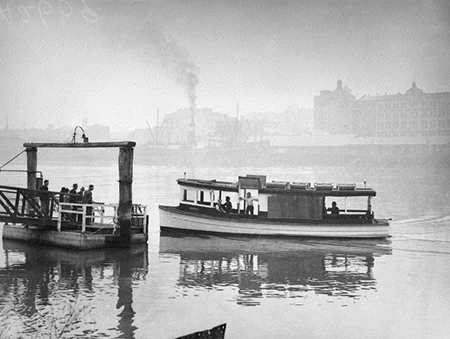 Brisbane, having survived the ravages of past regimes indifferent to environment and heritage, is now a vibrant and attractive city, and the river is a large part of what makes it so. Boardwalks extending along opposite banks attract numerous pedestrians, joggers and cyclists, sometimes veering to avoid collisions; and catamaran ferries now ply between the University of Queensland, the CBD and Hamilton, near the airport â a total distance of roughly 20 kilometres. The River: A History of Brisbane shows how closely the city and river are intertwined. Despite my misgivings, I passed an agreeable hour in the exhibition, which, along with the changing temporary exhibitions, makes the Museum of Brisbane well worth a visit.

Not to forget the clock tower, though being dwarfed by skyscrapers it no longer affords more than a fleeting glimpse of the river below.

Stephen Foster is co-editor of reCollections and an adjunct professor at the Research School of Humanities and the Arts, Australian National University.