First Peoples is a permanent part of the Bunjilaka Aboriginal Cultural Centre at Melbourne Museum. Opened in September 2013, it represents a significant collaboration between the museum and the Victorian Aboriginal community (who use the collective name 'Koorie'). The aim of this collaboration was not just to produce an exhibition for the public, but to improve access to collections for the Koorie community, extend knowledge, research and identification of collections, and facilitate skills exchange. The exhibition was also designed with the Australian Curriculum in mind, and the Bunjilaka section of the museum website contains education programs for all levels, either self-guided or led by museum staff.

Four spaces make up the First Peoples exhibition. 'Wominjeka' ('Welcome') introduces the diversity of Victoria's first peoples, while 'Our story' explores some of their history. 'Generations' is an audiovisual space in which personal stories of many individuals are shared, and 'Many nations' is a display of nearly 500 objects â weapons, tools, toys, etc. â from around Victoria and other parts of Australia. 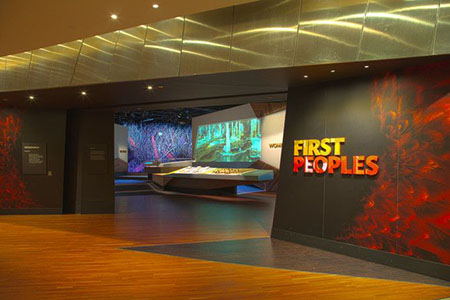 Upon entering the exhibition space it is easy to be uncertain about which way to go. To some extent, the order in which the spaces are visited is not that critical. 'Generations' and 'Many nations' can certainly stand alone. 'Our story', with its historical narrative, does have a logical direction of travel and, with three possible entrances, the visitor would benefit from some reassurance near the beginning that they are going the right way. A clear map can be found within the education material available on the Bunjilaka website, and it would be useful to have this available either as a brochure or on display near the exhibition entrance.

'Wominjeka' is the first space that you encounter and the logical place to begin.  Unfortunately, this is also the least visually appealing part of the exhibition, overwhelmed by the walls of photographic portraits and the recorded voices emanating from the 'Generations' space to the right. This is disappointing, as the interactive language map that makes up the centrepiece of 'Wominjeka' is a wonderful way to introduce the complexity and diversity of Victoria's first peoples: 38 languages are recognised in Victoria, each associated with a particular country, and here you can listen to each of those language names spoken by someone from that country. Despite being interactive, this part of the display seems outdated and 'low-tech' compared to the rest of the exhibition, and could perhaps do with an update. There are better examples of interactive maps elsewhere in the museum (albeit usually confined to visual, rather than audio and visual, displays).

Moving on from the welcome space, 'Our story' is a combination of objects, historical images and contemporary artwork that takes visitors from Creation to the present day. It begins with 'Bunjil's nest', a cinema space with an animated sculpture and soundscape that tells the story of Bunjil. Bunjil is a significant creation ancestor for most of Victoria's language groups, and it is from this ancestor that the Bunjilaka Aboriginal Cultural Centre takes its name ('Aka' means land or place). Visitors can sit and listen to the creation story while watching the hypnotic eagle-shaped sculpture. Unfortunately, it would be easy to bypass this part of the exhibit, as it is located to one side of the main 'Our story' thoroughfare. The space is also quite dark and the seating therefore difficult to see, which may discourage visitors from staying long enough to listen to the whole story. 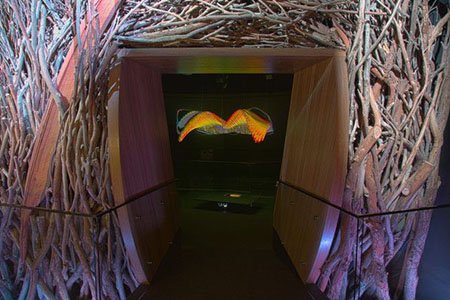 An effective mix of objects, images and dioramas, supplemented by sketches and writings by early European settlers and explorers, makes up a series of displays about the use of plant, animal and other resources by the first peoples â some of which may surprise visitors with its complexity. Trade and ceremony are also touched on, before the narrative moves on to the period of European contact. Given the potential sensitivity surrounding many of the topics covered in this section of 'Our story' â smallpox epidemics, massacres, forced relocation and the Stolen Generations â the presentation is surprisingly restrained, even understated. Some of the lighting in this section is very low and, while this might be for dramatic effect, I was left feeling that I might have missed things in the dark.

As someone with an interest in the long-term history of people in Australia, I was a little disappointed by the quantity and depth of information presented about pre-European times. The archaeological record of Victoria has the potential to tell us more about the lives of the first peoples than this component of the exhibition would suggest. However, it is important to recognise that First Peoples is focused on telling the stories of the first peoples from their own perspectives, in their own voices. Hopefully, as more Indigenous Victorians undertake training in archaeological methods, this part of the history of the first peoples will also become something that they, themselves, can identify and share.

The final section of 'Our story' is entitled 'Shared histories', and gradually moves the story of Victoria's first peoples from early contact to the present day. The stories here include the role of Indigenous Victorians in, for example, Victoria's war and sporting histories. The section concludes with some of the ways in which today's first peoples are finding their place in both Koorie and 'Western' cultures through artistic expression and the renewal of traditional activities.

A highlight of the First Peoples exhibition is the 'Generations' section. Here, the visitor is presented with two walls covered in photographic portraits and, through an interactive display comprising text and additional photographs, a personal story about each individual is shared. The stories are divided into four themes â family, culture, connection and resilience â and the same themes are discussed in the 'deep listening' space in the centre of 'Generations'. In this cinema space you can sit and listen to a number of individuals sharing their own, personal stories, while their near life-sized image appears on the wall opposite. 'Generations' is a celebration of the survival of Koorie cultures and identities, and is a salient reminder that these peoples are not just part of Victoria's past, but are a part of its present and future. 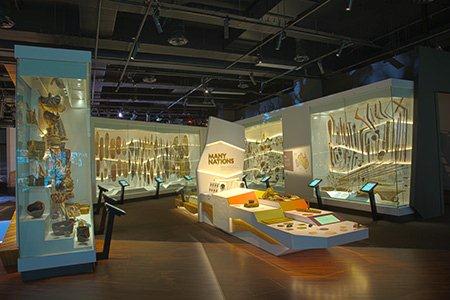 Lastly, the 'Many nations' section of First Peoples is a more traditional type of museum display. Almost 500 objects from around the Australian mainland and the islands of the Torres Strait are exhibited, chosen from the museum's collection of 25,000 items without cultural restrictions. The display is designed to highlight the diversity of design and iconography applied to similar objects across the continent, with the objects grouped into six sections. Each section has a feature item that is Victorian. Information about each object, including catalogue and provenance details and historic photographs, can be accessed via a digital display. The 'Toy stories' section includes short animated videos to engage the younger audience. There is also a small 'hands-on' display in this area, where the young (and young-at-heart) can touch a number of objects, and try their hand at drumming or starting a fire, for example. Other activities for kids sometimes run in association with the exhibition, such as (on the day I attended) a shield-decorating workshop.

The absence of labels within the 'Many nations' cabinets contributes to a striking display. However, although the digital interface is easy to use, some visitors will no doubt miss out on this additional detail â whether through a reluctance to use the equipment, competition from other users, or a desire to simply observe. For these viewers, more detail within the display cabinets would be beneficial. Although a similar criticism could be levelled at the 'Generations' portrait-wall, it is perhaps easier to develop a connection, imagine a story and recognise diversity from faces and people than it is from objects. Additionally, the voices from the 'deep listening' space can be heard while perusing the photographs, providing at least some context for the images.

The other areas of Bunjilaka Aboriginal Cultural Centre are definitely worth a visit. The entrance to First Peoples comprises an exhibition space, Birrarung Gallery, which hosts a range of contemporary exhibits from established and emerging Indigenous artists. The Milarri Garden showcases plants that were traditionally used for food, medicine and technology. There is also a temporary exhibition space, currently hosting Empty Coolamons (until April 2015), an installation in memory of the Stolen Generations. 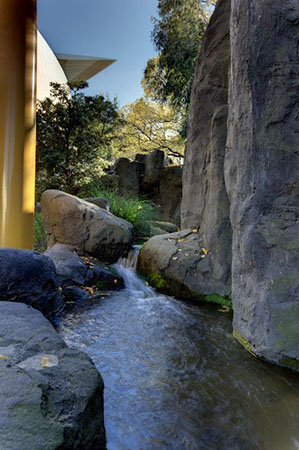 Overall, First Peoples is a vibrant and diverse exhibition. It utilises a variety of media to inform and engage, with content suitable for visitors of all ages. With its mix of historical information and contemporary issues and perspectives, it should be compulsory viewing for all Victorian school children. The Bunjilaka website is a useful supplement. As well as the educational material, many of the interactive parts of the exhibition are duplicated on the website (e.g. the language map and a sample of the 'Many nations' catalogue). Web visitors can also meet members of the Yulendj, the community reference group that helped put First Peoples together; and there are a number of behind-the-scenes videos. It is also possible to engage with Bunjilaka via the social media platforms Facebook, Twitter, and Flickr.

Many components of this exhibition could easily have been presented in an overtly political or moralistic way. First Peoples avoids this and instead succeeds at being a celebration of identity, diversity and resilience. By giving the voices of Victoria's Koorie peoples primacy, the visitor has an opportunity to consider a perspective quite different from the appropriated knowledge and history that often characterised museum exhibits of past centuries. Students undertaking the education programs at Bunjilaka are encouraged to see, listen, feel, and think. All visitors to First Peoples should find themselves doing the same.

Jacqui Tumney is a casual lecturer and honorary research associate in the Archaeology program at La Trobe University, Melbourne, and a geographical information systems officer for Andrew Long and Associates, an archaeological heritage consulting company.