âHero of Waterlooâ, âthe Iron Dukeâ and, in Tennysonâs phrase, âthe last great Englishmanâ (though he was born in Ireland) â if ever an individual deserved the much abused epithet âiconicâ, Arthur Wellesley, Duke of Wellington, must surely fill the bill. In memory of his great victory over Napoleon 200 years ago, the National Portrait Gallery in London has mounted an exhibition entitled âWellington: triumphs, politics and passionsâ.

Life stories lend themselves to museum exhibitions. They offer a narrative framework, identifiable themes, and opportunities to link the particular with the general. They give material culture a readily comprehensible context; and often, through the skilful use of objects and text, they open questions for debate.

So effectively does the Wellington exhibition achieve these ends, it deserves to be recorded as a model of the biographical exhibition genre. Granted, Wellingtonâs remarkable life lends itself to this form of display. But the curatorâs skill is evident in selection, arrangement, captioning, and telling an engaging story to visitors arriving with vastly differing expectations and knowledge of the subject matter.

The exhibition traces Wellingtonâs life more or less chronologically, beginning in India in the 1790s, before his role in the overthrow of Tipu Sultan and later victory over the Marathas brought him to public fame. Objects, admirably chosen more for their content than aesthetic appeal, include paintings of events, landscapes, sketches, cartoons, and three-dimensional souvenirs, and have been drawn from various public and private sources. The section headed âPeninsular Warâ features, from a private collection, a lively diary by Edmund Wheatley, a junior officer in Wellingtonâs army, written and illustrated for âhis sweetheart, Elizaâ. An accompanying screen allows visitors to scroll through its pages. Some of the senior officers and other luminaries are represented in a series of miniatures sketched by Thomas Heaphy near the scene of battle. At the end of the war, when it appeared the portraits were to be published in a grand composition, there was a clamour to be part of it, so that the final version, surviving only as an engraving, was âimplausibly overcrowdedâ. The little watercolours, held by the National Portrait Gallery, are more than adequate compensation.

The victory at Waterloo generated a profusion of commemorative paintings, medals, plates, jugs and mugs, purchased by an admiring public. After the war, Wellington reluctantly pursued a political career, serving as prime minister from 1828 to 1830, and again briefly in 1834. Staunchly conservative, he fiercely opposed parliamentary reform, making him the butt of caricaturists and earning him the unflattering sobriquet of âthe Iron Dukeâ (which, contrary to popular perception repeated in this exhibition, did not initially refer to his installation of iron shutters at Aspley House to keep out the mob). With the help of cartoons and portraits, the exhibition encapsulates the politics of the period, including Wellingtonâs equivocal views on the other great issue of the day, Catholic emancipation. 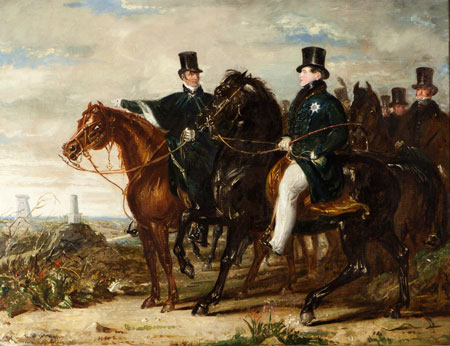 A final section, headed âFamily, friends and private lifeâ, refines the images of soldier and politician. Wellingtonâs marriage to âKittyâ Pakenham was not a happy one, though, by the time of her death in 1831, they were more or less reconciled. His passions were directed elsewhere, and included an affair that later provoked his memorable line âPublish and be damned!â

The exhibition culminates in Wellingtonâs death in 1852, by which time his heroic reputation had been largely restored. His funeral, attended by an estimated million and a half people, was recorded in graphic and splendid detail in a hand-coloured etching and aquatint over 20 metres in length â too long for display in its entirety, but well supported by an adjacent media installation (also available as an app) which enables visitors to scroll through the entire procession. 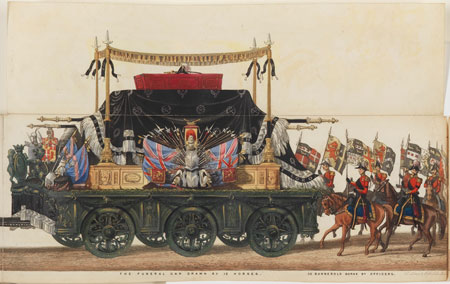 As befits a biographical exhibition in a portrait gallery, portraits take pride of place. The fine book accompanying the exhibition tells us that Wellington sat for portraits on some 200 occasions, a task he understandably disliked. The exhibition features several, including one by Sir Thomas Lawrence that appeared on the British Â£5 note from 1971 to 1991. 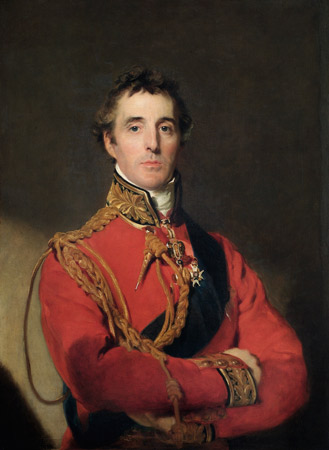 Another, by Francisco de Goya, painted in the few years before Waterloo, occupies a special place in the history of museums as the object of an improbable heist. Although the exhibition and book do not tell us, it was stolen from the National Gallery in 1961 and held to ransom, as later revealed, by a retired bus driver, irate that his government had contributed a vast sum to acquire the portrait when he and others like him were unable to pay their television licences. The theft led to a dramatic improvement in security procedures in museums and galleries throughout the United Kingdom; and it gave Sean Connery the opportunity for a sardonic line in the James Bond film Dr No. 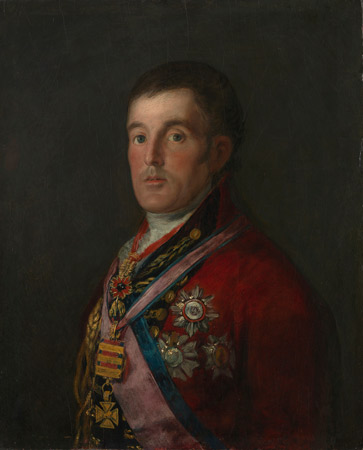 The numerous representations of Wellington, taken over a long period of his life and often differing remarkably from one another, disclose much about the man. But how much can portraits tell? And, in an exhibition such as this, how much guidance should the curator give the viewer? In a caption to John Hoppnerâs oil of the young Arthur Wesley, as Wellesley was then known, circa 1795, the curator remarks: âHis wistful expression gives the portrait a romantic air and perhaps reflects the hesitation of a young man about to commit himself to a perilous careerâ. Did the artist possess such insight and foresight? I am not entirely convinced. But the caption is properly speculative, inviting the viewer to reflect on the portrait and draw his or her own conclusions.

I am less persuaded by the comment accompanying Lawrenceâs sketch of âKittyâ Pakenham, 1814: âIt shows a woman of beauty, but the pose suggests nervousness, reflecting the difficulties in her relationship with Wellingtonâ. Or was she anxious that her Duke was still abroad? Or was it simply that posing for portraits did not come to her naturally, as it evidently did for her husband? The caption might be well wide of the mark. Nevertheless, it is not didactic, and it provokes reflection â which is what all captions, whenever opportunity presents, should do. 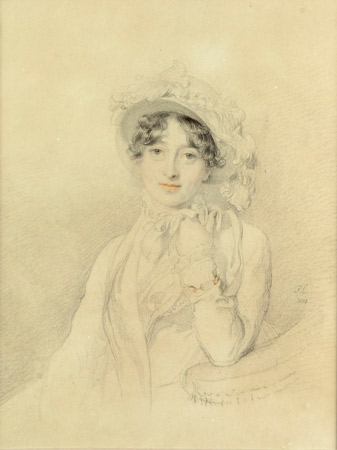 Wellington: Triumphs, Politics and Passions is one of many ways Waterloo is being commemorated in Britain during its bicentennial year. Windsor Castle is presenting a themed tour of portraits, prints and archival material relating to the battle and its aftermath; the British Museum is focusing on âBonaparte and the Britishâ; the National Museum of Scotland is exploring the impact of Waterloo on the Scots; the Bronte Parsonage Museum is investigating the Brontesâ fascination with war; the National Army Museum has organised âa programme of family-friendly events and exhibitions across the countryâ; and there is much, much more, helpfully set out at Britainâs Culture24 website. Then there are numerous exhibitions and events across the channel, including NapoleonâWellington: Shared Destinies at the MusÃ©e Wellington at Waterloo, located in a former coaching house which served during the battle as Wellingtonâs headquarters.

I caught only the one exhibition (though I did share a Eurostar carriage to Brussels with a group of yokels in period dress, evidently bent on reasserting the English victory in Belgian watering houses). While I should have liked to have seen more, I doubt that I would have encountered a more satisfying view of Wellington or a better example of the curatorâs craft.

Stephen Foster is a co-editor of reCollections and an adjunct professor in the Humanities Research Centre at the Australian National University.