If you look upwards in the foyer of the Australian National Maritime Museum, youâll see a small boat, the Alexandra Shackleton, hanging from the ceiling. In this boat, adventurer Tim Jarvis and companions recreated Sir Ernest Shackletonâs epic voyage from isolated Elephant Island near the tip of the Antarctic Peninsula across the turbulent Scotia Sea to South Georgia, where he arrived in 2013. Jarvis then walked across South Georgia, in the footsteps of Shackleton and his three companions who, in 1916, completed this extraordinary journey to raise rescue for the 22 expeditioners who were still trapped on Elephant Island.

The Alexandra Shackleton is a replica of Shackletonâs famous James Caird and is a strong reminder of the perilous nature of expeditions in the heroic age of Antarctic exploration (1895â1922), of the frailty of these craft and of the perseverance of the men who took part in these ventures.

Itâs centenary time down south. As we pass the multiple anniversaries that mark 100 years since that heroic period, a remarkable series of achievements from an exciting period of the human occupation of the south are celebrated. During these 27 years, men from 12 nations participated in 17 expeditions to Antarctica. They first established bases on the edges of the continent and, from there, climbed up to the vast and empty plateau, exploring along coastlines and claiming territories for their governments.

Exhibitions, books, seminars and movies have been produced or planned to mark the centenary highlights of this period and, in their thousands, tourists visit âsacred sitesâ across the continent. Nowadays, tourists regularly land on Elephant Island and hardy groups walk across South Georgia. In some cases, such as that of Jarvis and his team, brave people have attempted, and often succeeded, to recreate some of the experiences of the more well-known adventures. This is a committed and exciting form of tribute and memorialisation. 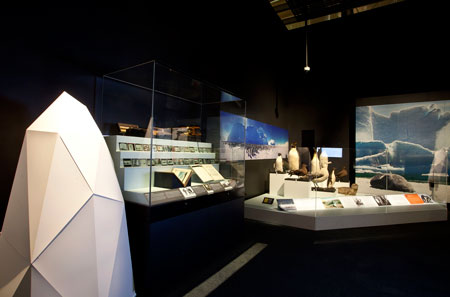 At the height of his fame, Shackleton planned a bold expedition that, if successful, would be the first to cross Antarctica. His aim was to launch two parties that would work from opposite sides of the continent. Shackleton, as leader of one party, planned to cross from the Weddell Sea. A second party, led by Aeneas Mackintosh, would be based in Robert Scottâs old expedition hut on Ross Island, from where his team would lay supply depots up to the South Pole. As we know, Shackletonâs party never reached the continent after their ship, the Endurance, was crushed in the heavy moving pack ice of the Weddell Sea. Mackintoshâs men were isolated on Ross Island after their ship the Aurora, with most of the supplies, was blown from its mooring by a fierce storm. Three men died while this party attempted to survive and to lay supply depots for Shackletonâs party, unaware that they would never need them.

The survival of Shackletonâs party, on the sea ice and on Elephant Island, the small boat trip to South Georgia and the walk across South Georgia to whaling station Stromness, is one of exploratory survivalâs greatest stories.

In Sydney, Daina Fletcher of the National Maritime Museum has put together a fascinating exhibition based on Shackletonâs fabled Imperial Trans-Antarctic Expedition 1914â17. Using photographs, diaries, notebooks and artefacts drawn from collections in Australia and New Zealand, Fletcher and museum staff have built an engaging exhibition to tell this story. 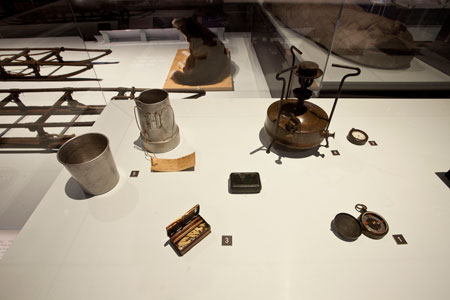 Told in two parts, the story of each party is revealed in images and text panels around each âwingâ of the main exhibition. The tale of the Endurance party is illustrated by the famous images and film footage of Australian photographer Frank Hurley.

Panel sidebars also feature a generous, informed commentary by Tim Jarvis. These are intriguing reflections on the story, made the more so by Jarvisâs direct experience of one section of the trip, 100 years after the original expedition. In addition to these comments we also see and hear from Mel Mackenzie, an Australian scientist who talks about her own experience in Antarctica.

Stuffed penguins and huskies on loan from the Antarctic Division add a realistic dimension to the words. The tracks of the two expedition vessels are laid out in vivid red, on large white dioramas that are kept low to the floor and equipped with iPads for further interpretation. One of the most realistic models is of the Endurance trapped in the ice. 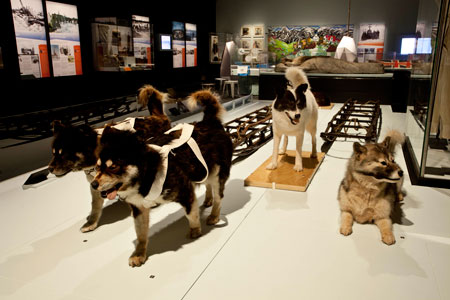 Trekking their way through the exhibition are stuffed huskies on loan from the Antarctic Division dragging sledges, found near the hut, that were probably used by the Ross Sea party
photograph by Andrew Frolows, Australian National Maritime Museum

The exhibition is child friendly, with some displays and games at child-friendly heights â a thoughtful decision aimed at families and visiting school groups.

Life in the expedition ships and huts is exemplified by artefact displays, images and models. In such a limited space, the exhibition may be too well resourced, and overcrowding impedes narrative flow and comprehension. The mingling of noise from the various audio and video presentations, including opera from the Aurora, the voices of Jarvis and Mackenzie, and strains of Edward Elgar from the supporting Still Lives exhibition, creates confusing soundscapes.

The theme of modern science is intriguing and it indicates that the science of the Imperial Trans-Antarctic Expedition was not a high point of the period. Like many expeditions from the period, Shackletonâs primary objectives were geographic, territorial and egotistical, a point that is well made by the exhibition. While much data from the Weddell Sea went down with the Endurance, that from the Ross Sea party complements the records of three previous expeditions to the same region. It was pleasing to see the diaries and equipment of Andrew Keith Jackson who, despite the trials of the Ross Sea party, kept up the basic recording activity of science, almost, it seems, as way of maintaining sanity in a world gone horribly wrong. 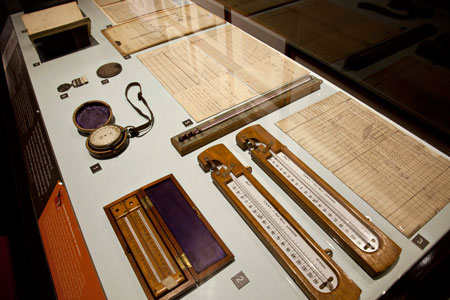 There are engaging human touches throughout the exhibition. A recording of Enrico Caruso sings to us, as it did to the men of the Aurora; replicas of clothing hang in cases; and Hurleyâs diaries of the expedition â now seen as âholy relicsâ of the age â are displayed. Original items always attract interest and add genuine layers to the interpretation. Material from the captain, Frank Worsley, navigator Frank Wild, in command of the Endurance men on Elephant Island and Ernest Joyce of the Ross Sea party enrich the narrative. 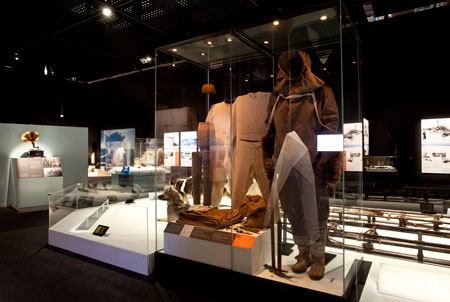 In addition to the extras of science and modern commentary, Shackleton: Escape from Antarctica is complemented by three other displays. The exhibition sponsor, APT, has been allocated a generous space to advertise and show film of their trips to Antarctica; Jane Ussherâs evocative photographic installation of images of the Ross Sea huts, Still Life, is engaging; and artists Wendy Sharpe and Bernard Ollis, who travelled with Tim Jarvisâs team, have a wall dedicated to the paintings they made on that journey. (By the time you read this both Still Life and the original paintings will have moved to other venues.)

The ticket price for the exhibition is high â but this is an important exhibition that relates one of the worldâs most engrossing survival stories and which presents an interesting range of tales and artifacts from the lives of the expeditioners.

Shackleton: Escape from Antarctica is supported by a website that reproduces wonderful original photographs from the expedition and the exhibition in situ, and by a program of interesting talks.

The curator and her colleagues are to be congratulated for gathering the wealth of engaging and original material relating to the Imperial Trans-Antarctic Expedition that comprises this exhibition.

Stephen Martin has been travelling to Antarctica for two decades as history lecturer, field guide, sailor and tourist. He has curated major exhibitions of Antarctic themes and written extensively on Antarctic history, including A History of Antarctica (2nd edn, 2013).