Hailed by commentators as a landmark event, Indigenous Australia: Enduring Civilisation at the British Museum is a masterful demonstration of how to enliven forgotten collections, to which every ethnographic museum in Europe should pay attention. This is the first time the museum has mounted a significant exhibition of its historic Indigenous Australian material, and the newly appointed senior curator, Palawa woman Gaye Sculthorpe, has taken the opportunity to demolish the usual hackneyed museum tropes of Aboriginal Australia with this lesson in curatorial craft.

In a series of skillfully woven narratives, Sculthorpe opens a world that is rooted in both ancestral origins and the violence of colonial occupation, maintaining a cohesive thread (helped by beautiful gallery design) that binds together what could otherwise be incongruent elements. Greeting visitors at the gallery entrance with the astounding Kungkarangkalpa canvas â which was reproduced to startling effect on publicity material across London during the run of the exhibition â the first section, âUnderstanding countryâ, explores an elaborate Aboriginal and Torres Strait Islander geography with a cascade of objects that are in turn exquisite, mystifying, powerful and unsettling. From the engraved pearl shell and boab nuts of the Kimberley, through the baskets and fish traps of the Top End, to the pituri bags of the desert and the dance masks of the Torres Strait, each object is allowed to swim in its own generous physical space, with the accompanying text labels building an incrementally complex understanding of âcountryâ. This is delicate work, calibrated to take the visitor step by step into the world of the makers. 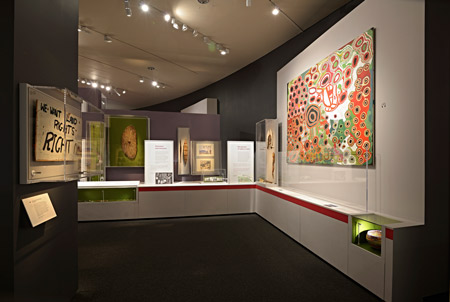 The fight for land rights is reflected in the objects shown here, including (at left) a placard from the Aboriginal Tent Embassy, set up outside Parliament House, Canberra, 1972. At right can be seen the collaborative painting used as the exhibitionâs signature work, Kungkarangkalpa (2013), by Tjaruwa Woods, Yarangka Thomas, Estelle Hogan, Ngalpingka Simms and Myrtle Pennington.
Â©The Trustees of the British Museum

As the narrative shifts from geography to history in the second section, the remarkable depth of the museumâs collection is revealed. Many of the artefacts collected by British missionaries, naval crews, explorers, police and administrators, as either evidence or âscientificâ curiosities, found their way to the British Museum during the colonial period and, unsurprisingly, many of them have a provenance that relates directly to foundation stories from Australian history. From the shield collected during James Cookâs 1770 visit to Botany Bay, to the delicate Tasmanian kelp water basket sent to Britain for display in the 1851 Great Exhibition in London to the delightfully sassy wedding gift of an emu feather skirt from the Aboriginal women of Victoria to the Princess of Wales in 1863, inviting reciprocity from the young royal, the objects sit in direct relationship to the swirl of historical events in which they were formed. And, necessarily, those events are full of confusion, violence, destruction and resistance, as well as the occasional encounter in friendship and even the rare romance. Here Sculthorpeâs skill as a diplomat is revealed. She neither shies away from the painful truth of the colonial past nor simplifies it into a flattened narrative of obliteration. Rather, she emphasises Aboriginal and Torres Strait Islander peopleâs agency, resilience and innovation by juxtaposing the historic objects with artworks and quotes from contemporary commentators. Moving chronologically, the section ends in the great upheaval of Australiaâs civil rights and land rights movements of the late 20th century and works to bring the earlier objects into the continuing context of the fight for recognition that is still being waged. 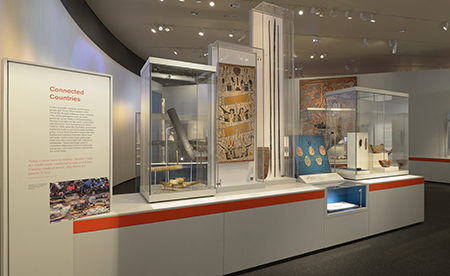 The âConnected countriesâ module in the Indigenous Australia exhibition, which displays objects associated with the extensive trading networks between Aboriginal and Torres Strait Islander peoples and Indonesian fishermen
Â©The Trustees of the British Museum

As the past becomes the present, the final section opens into a poetic and defiant statement of identity through multimedia first-person narratives that link the historic perspectives of the first two sections to an irrefutable claim for the future: Aboriginal and Torres Strait Islander peoples are still here and still living their culture in all its diversity. 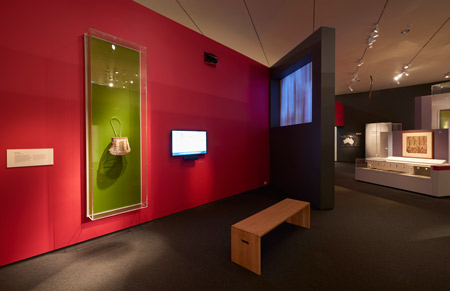 The clever weave of anthropology, social and political history and reflexive commentary used by Sculthorpe creates a vibrant mix that carries the visitor deep into the complexities contained in the collections, without falling into the fashionable but simplistic post-modern framing so popular with museums of ethnography across Europe at the moment. It is a potent formula and one that offers an example of how similar collections in other institutions might find new meanings. As the European museum industry continues to publicly reflect on the future of their troubled ethnographic collections with their explicitly racist histories, this exhibition can be seen as part of the trend for the remediation of material that can no longer be displayed within redundant narratives of âthe otherâ. The ideal, as Pitt Rivers Museumâs Clare Harris and Michael OâHanlon have recently suggested, is that the collections be âreconceived as major resources for the interrogation of colonialism and/or for engaging with indigenous people and other audiencesâ. But thatâs easier said than done. As theoretical approaches reverberate through curatorial practice, ideas from actor network theory, object biographies, objectsâ afterlives, and of course the entangled nature of colonial relations through things, have all taken form in galleries of anthropology, ethnography and the most recent reformulation, âworld culturesâ, throughout Europe. Indigenous Australia: Enduring Civilisation walks between all of these methods with a refreshing lack of self-consciousness.

It is a little surprising that the British Museum should be in the vanguard of curatorial practice and it is a development that has caught Australian critics somewhat off-guard. For an organisation so aligned in the popular imagination with the material legacy of the colonial past, this temporary exhibition signals a welcome trajectory that works against the awkward reminders of darker histories of British intellectual discourse housed in other galleries of the museum. Critiques of the wider museum and indeed Britainâs entire colonial history have inevitably been conflated with critiques of Enduring Civilisation, a mix that is not unpredictable: the institution that contains the material footprint of the colonial past is understandably seen as complicit in maintaining that historyâs unexamined legacy through the still apparent logic of what decolonial scholar Walter Mignolo calls âcolonialityâ. Unpicking this logic exposes the pervasive tendrils of power and exclusion along lines of race, noticing how institutions that generate knowledge collude in maintaining the status quo of privilege. But the simple folding together of these multiple and conflicting positions is a lazy response. Clearly the museum carries a heavy cultural weight, including the legacy of its own governance structures, yet its deeply intelligent approach to this exhibition signals a generational shift is in train. 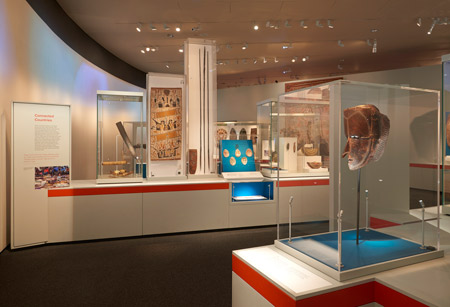 On display at right is a turtle-shell mask collected on Mer (Murray Island), Torres Strait, Queensland, before 1855
Â©The Trustees of the British Museum

If the appointment of Sculthorpe was a major factor in this reorientation, the museumâs collaboration with the National Museum of Australia also played a significant role. For the previously unexhibited objects to find new life, the preparatory research would necessarily be based in communities of provenance and, in that regard, the British Museum was assisted extensively by the social capital built over decades of co-operation between the National Museum and Aboriginal Australia. The National Museumâs team of Aboriginal and non-Aboriginal curators, conservators, and reference group members who contributed to the project have enormous expertise in the immensely challenging space of institutional and community relationships, the depth of which will become apparent when the objects that starred in Enduring Civilisation head to Canberra for their November opening in the larger companion exhibition, Encounters. With this much-anticipated parallel event, the culmination of a seven-year long process of consultation across the entire length and breadth of Australia is coming to an end. And what an end it promises to be. More than 25 Aboriginal communities will be participating in the exhibition and the result is gearing up to be nothing short of revolutionary. Cited by National Museum director Mathew Trinca as perhaps the organisationâs most important work for a decade, Encounters also sets in motion an unintentional experiment in museological practice. While the objects travel across the globe, they also migrate between the old world and the new, coming into relationship with their founding stories from the other side of the colonial divide. These twinned exhibitions will offer museum theorists an unparalleled opportunity to watch the distance between regimes of old and ânewâ museology as they play out in galleries a hemisphere apart, with deep relevance to the ongoing project of remediating neglected and redundant collections in Europe.

In this wider context, Indigenous Australia: Enduring Civilisation can clearly be seen as a teaching exhibition, directed at British audiences who have had little exposure to either Aboriginal history or, more shockingly, the truth of their own colonial past. If it were shown in Australia as is, it would look constrained and slightly unsophisticated in the more complex world of local race politics. As it stands, it has hit its mark perfectly, widely acclaimed by critics and the public, with visitor numbers far exceeding expectations.

Across the globe and across two significant institutions of public education, these two exhibitions will form a project of rare reach and scale. The British Museum has completed the first half with a stunning accomplishment in Indigenous Australia: Enduring Civilisation. Whether the stories take a more permanent form in London beyond this first ephemeral outing is yet to be decided. But itâs a start. Meanwhile, the objects, until recently unloved and unexhibited, have once again found the light and that in itself is a game changer.

Christine Hansen is a researcher in critical heritage studies at Gothenburg University, Sweden. Her current research within the environmental humanities is funded by Formas, the Swedish Research Council.