The National Museum of Australia's website describes Circa as an audiovisual revolving theatre 'taking visitors on a unique visual journey through history'. It is a stand-alone theatre that leads into the exhibition areas. Visitors enter the seating area during an audio introduction. The seating area moves through subsequent quadrants that feature short segments (3–5 minutes) in a multi-screen theatrical setting. A revised version of Circa was completed in 2009, in response to a review of the Museum's exhibitions and programs chaired by John Carroll.

Based in Boston in the United States, Anway & Company won the worldwide tender to design the inaugural exhibitions for the National Museum of Australia, which opened in 2001. Anway, in partnership with American company Batwin and Robin, created the concept and design for the original Circa, which was then produced by Night Corporation. Circa's inaugural brief was to introduce visitors to the Museum and to the country of Australia. Dawn Casey, the Museum director at that time, instructed the producers to encourage visitors to go out and buy a ticket to the rest of the country. Each quadrant (in the original version, there was no film element in the first quadrant) concentrated on one of the themes explored in the Museum: land, nation, and people — in other words, the history, culture and identity of Australia. 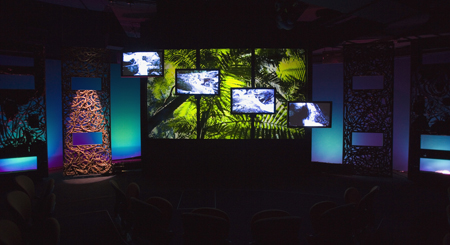 The 'Land' quadrant was based around the four elements: water, earth, fire and air. It was cyclical in structure, starting in water and ending in water. This segment journeyed from the ocean across the land to the interior and back to the ocean with the elements of wind and fire providing climatic peaks. In 'Nation' an off-screen voice asked, 'What makes an Australian?' A collage of voices replied, exploring the question and contrasting an 'official' version of history — government, monarchy, military — with a 'people's history' — Indigenous, convict, migrant and trade union. The final quadrant, 'People', was a mosaic of portraits of everyday Australians talking in their own voices with ceremonies as a key element: birth, initiation, death, marriage, elements common to the diverse cultures that make up Australia. 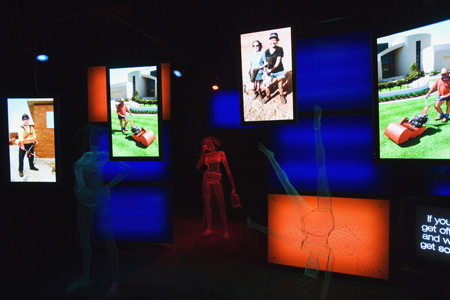 'Circa revised' makes use of the existing technology, including the rotating quadrants and moving screens; but the story it tells is quite different, in content and style. It opens with a female voice telling visitors 'Circa explores Australian history, taking you from the ancient past to the present day. The main characters in the show are objects from our collections, many of which you'll meet again when you explore the exhibitions'. 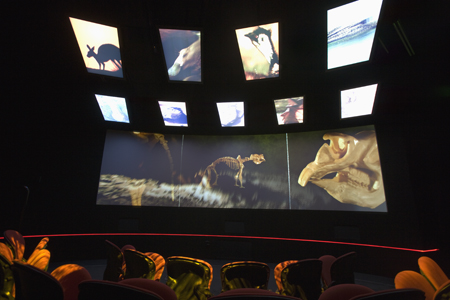 Quadrant one displays sweeping prehistoric landscape images on multiple screens, exploring 'deep time' Australian history: the shaping of the continent and its landscapes, the evolution of a distinctive biota and the advent of humans. Quadrant two traces Australian history from Aboriginal Australia to the end of the nineteenth century, moving from ancient landscape images to manmade pictorial objects. Rock art, paintings, photos, maps and historical buildings are interwoven with 'character' objects. Connections are made to reveal how the Australian story is composed of intersecting strands of experience. Male and female voices take turns as narrators, suggesting multiple views and experiences, from the beginnings of European settlement to late nineteenth century agricultural and industrial expansion. Quadrant three introduces the arrival of moving pictures and sound and their impact on the nation and its history. It continues the narrative from the 1890s to the aftermath of the Second World War. The fourth and last quadrant opens with the advent of television in the 1950s, moving through a series of significant themes and events in post-war Australia into the present. 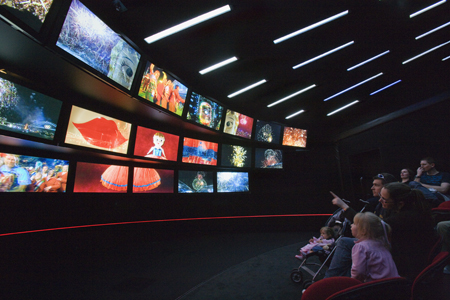 Circa, as originally conceived, was intended to be a theatrical experience, arousing in visitors surprise, engagement, curiosity and anticipation. The program demanded a high level of creative and technical expertise. High production values (cinematography, direction and editing), dramatic lighting and immersive surround sound were critical to achieving an engaging and memorable beginning to the museum experience.

The original Circa used 35-millimetre photography, colour manipulation and juxtaposition of images (the red desert next to a bright green lawn watered by sprinklers) to create a statement and achieve a visual composition that was fresh and unique. The images were augmented by a soundscape that meshed familiar musical themes, Indigenous music, cut-up popular music and real-world sound effects. The overall effect was impressionistic and subjective. The graphic visual interpretation of land, nation, and people aimed to intrigue. It could be considered an audiovisual meditation, or poem, on what and who is Australia.

The current Circa focuses more strongly on an introduction to the Museum. Images and narration are used to construct a compact overview of Australian history. Music drives the story forward and builds to moments of historical significance. The voices/narration are objective and strive for balance and impartiality. It educates and entices the visitor to learn more. The Museum's website says, 'History is, among other things, a story' and 'the story presented by Circa is one that has great relevance to the history classroom'. As such this version of Circa fulfils its declared aim 'to communicate that the Museum interprets history through material culture'.

One of the definitions of a museum is a building or institution where objects of artistic, historical, or scientific importance and value are kept, studied and put on display. How can an exhibit like Circa, charged with the goal of enticing and engaging visitors, fit that criterion?

The original Circa's approach presented an egalitarian liberal view. It appealed to the emotions and some of the messages were even interpreted as subversive. Visitors were invited to become immersed in the images and think about what they were seeing and come to their own conclusions. It placed Australia in the global village and commented on issues that affected us, such as climate change, large-scale immigration, tensions between the city and the bush. It asked questions without attempting to answer them. It did not address the notion of interpretation of history through material culture.

The current Circa has a more traditional flavour. Information is carefully constructed to present a balanced and fair interpretation of Australia's social history. It expresses traditional attitudes and values without speculating on the benefits or otherwise of change or innovation. It concentrates on the stories of Australian history using the program as a tool to educate. It does not refer to how Australia relates to the rest of the world or where the country is headed. It does, however, address the notion of interpretation of history through material culture, and more particularly through its own collections.

These two programs are vastly different. One is subjective, innovative, emotional, while the other is objective, traditional, and conservative. Is one better than the other? Or can they be seen as a reflection of the times, a capsule of history and indicative of the 'zeitgeist' or spirit of their respective period or age. Do they represent the inevitable nature of change, when a pendulum after swinging to one side must then swing to the other? The analogy that comes to mind in this instance is that of a poem versus a lecture. Some people like to read poems while others prefer to listen to a lecture.

Nicole Ma is an award-winning filmmaker based in Melbourne. She was executive director of Circa (2001).