One hundred years ago Douglas Mawson and the men of the Australasian Antarctic Expedition set sail from Hobart for Antarctica. They landed at Commonwealth Bay on 8 January 1911, establishing not merely a base, but making the first specifically Australian place upon the ice. Despite earlier Australian encounters with the region, this act of settlement is being marked as the beginning of a century of a deep and sustained connection with the Antarctic. Engaging directly with these centennial celebrations is Traversing Antarctica: The Australian Experience, a travelling exhibition created by the National Archives of Australia in collaboration with the Australian Antarctic Division and the Western Australian Museum, and opening first at the Tasmanian Museum and Art Gallery, Hobart.[1] 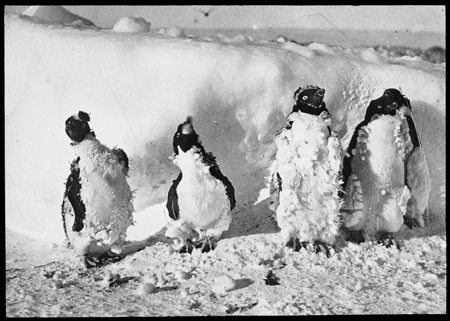 The exhibition is about Australia's political and scientific experience of the Antarctic over the last century. The story is told through the seminal moments in that history, the major, Australian-led expeditions that undertook science, exploration and territorial acquisition: the Australasian Antarctic Expedition (AAE) of 1911â14, led by Douglas Mawson; the British Australian New Zealand Antarctic Expedition (BANZARE) of 1929â31, also led by Mawson; and the continuing Australian National Antarctic Research Expeditions (ANARE) after 1948, under various leaders from the Australian Antarctic Division. 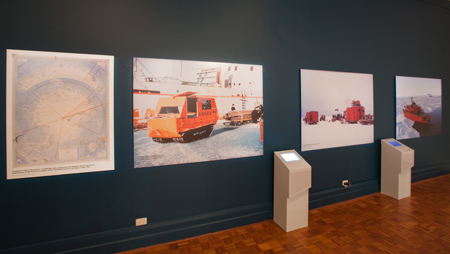 Section of the exhibition focusing on Australian Antarctic endeavours from 1947 to the 1980s
photograph by Gilbert Herrada
National Archives touring exhibition at Tasmanian Museum and Art Gallery
Traversing Antarctica has two sections. The first, and more substantial, narrates the developing bonds between Australia and the Antarctic, especially the acquisition of the Australian Antarctic Territory, and the simultaneous development of scientific work and geographic exploration. It begins with the Australasian Antarctic Expedition in 1911 and ends with the Madrid Protocol on environmental protection in 1991, moving through the territorial acquisitions of BANZARE, the early years of ANARE in the 1950s, and the negotiation and signature of the Antarctic Treaty in 1959, while skipping over the first decades of the Antarctic Treaty and the developments in scientific work and conservation during the 1960s and 1970s. Douglas Mawson, John King Davis, Richard Casey and Phillip Law all rightly figure as the preeminent actors in this story, especially as forceful advocates of a permanent connection between Australia and Antarctica. Mawson's striking claim of 1916, 'I believe firmly in allocating sections of the Antarctic Region to definite nations', sets the tone for the early part of the exhibition. The second section broadly outlines the major areas of Australia's scientific effort in the period between the treaty and the present (skewed heavily toward the present), including Southern Ocean ecosystems, terrestrial and near-shore ecosystems, glaciology, climate science, and the animal inhabitants of Antarctica. 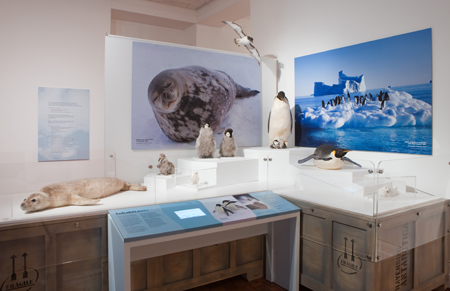 The 'Inhabitants' exhibit
photograph by Gilbert Herrada
National Archives touring exhibition at Tasmanian Museum and Art Gallery
Conceptually this exhibition has several strengths. Often exhibitions about the Antarctic divorce science from its social context, especially the context of international politics. And if science and exploration are almost always the subjects of Antarctic exhibitions, politics is rarely pursued. Not so this exhibition. In fact, it carefully, if subtly, balances science and politics. For example, while the exhibition concentrates on the creation of the Australian Antarctic Territory (a territory which, in spite of its historic and cultural importance to Australia and reality in Australian law, is not recognised by the majority of the world), its examination of science, especially toward the end of the exhibition, tempers any (mindless) geopolitical audacity. In recent public discourse on Australia's Antarctic policy, our territory has been depicted as something to be protected in the face of the rapacious intent of others,[2] yet this exhibition subtly insists on the importance of science, modern global environmental issues, and the fact that a committed body of men had to actively tie Australia to Antarctica. Yet equally, demonstrating the intimate links of science and politics in the Australian experience leads one to consider how science has been put to work in the creation and maintenance of a territory and a geopolitical stance. 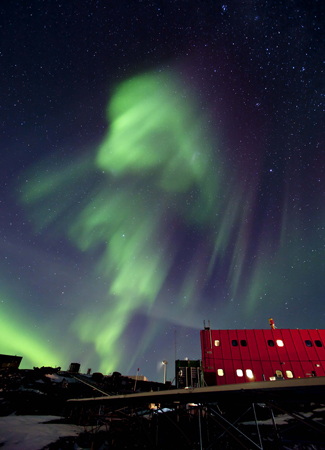 Aurora over Mawson Station
photograph Â© Chris Wilson
Australian Antarctic Division
Though the narrative is strong, there is nevertheless a major chronological gap, as it jumps abruptly from the signing of the Antarctic Treaty in 1959 to the agreement of the Madrid Protocol on environmental protection in 1991. This leap leaves out a fundamental tenet of the Antarctic Treaty System: the Convention on the Conservation of Antarctic Marine Living Resources (CCAMLR), which protects the whole Southern Ocean ecosystem and controls fishing activity within it. Australia led negotiations for this convention in the late 1970s, and Hobart is the site of the commission headquarters. Though it is mentioned briefly on the later 'Southern Ocean Ecosystems' panel, ideally it should have taken a place within the main narrative of the exhibition. Moreover, given that the government documents on these negotiations are just as profuse (and open) as those leading to the Antarctic Treaty, a full module would have been achievable and would have added greatly to the exhibition. Indeed, had the period between 1960 and 1980 been covered in better detail (again, the documents are there), the interesting relationship of science and politics might have been more fully explored, given the problems of the Antarctic scientific program in this period. 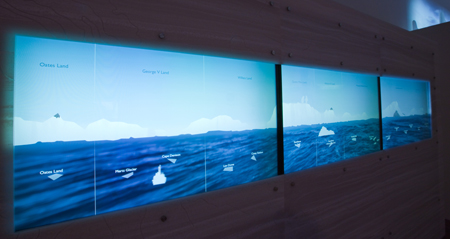 Nevertheless, there is a strong sense of direction within the exhibition, and the quality is heightened by excellent interpretive panels. Writing interpretive panels is a demanding art; curator Jane Macknight's panels are informative, concise and clear.

The physical encounter with Antarctica often dominates our understanding and narratives (and this exhibition offers an ice sledge and a husky, somewhat superfluously, as examples of that physical encounter), yet it is letters, telegrams and proclamations that necessarily dominate this exhibition. These textual records are carefully chosen and well deployed to tell the story. Most importantly, using these government records helps to reconfigure our appreciation of Australia's encounter with Antarctica, insisting on the equally consequential intellectual and bureaucratic labours that come before and after the brief physical encounters with the continent. 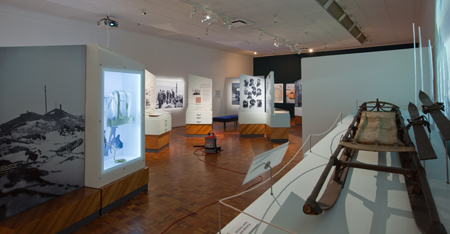 A manhauling sled, one of the significant objects in the exhibition
photograph by Gilbert Herrada
National Archives touring exhibition at Tasmanian Museum and Art Gallery

Yet, while I appreciate the insistence on these documents, such a text-heavy exhibition can afford greater curatorial intervention. Often texts are treated as equivalent to objects: they are simply placed in the display for the viewer to consider. Yet a government record, though its materiality can be important, is important for its written contents. For example, part of the report of the 1926 Imperial Conference is presented. It was at this conference that the governments of the British Empire agreed that the Antarctic should be overwhelmingly British (making accommodations for France and Norway). Over two pages is a lengthy text, printed in small type, detailing this Imperial policy. Could a better effort have been made to draw the viewer's attention to the choice phrases, while leaving the more engaged and committed visitor to read the whole text?

And then there are those documents that are physically relegated to inconspicuous places where they surely do not belong. The one document that should have been more prominently displayed in this exhibition is the Proclamation made by Douglas Mawson in February 1931 taking possession of parts of Antarctic for the British Crown â one of several he made during BANZARE. This document is the culmination of the earliest desires and efforts of Mawson and other scientific and political worthies of his time; it is a foundational document of the Australian Antarctic Territory. Yet the visitor finds it in the bottom drawer of a module. Undoubtedly the document demands careful conservation (doubly so because of its legal importance), but given the major theme of this exhibition, why was it made so inconspicuous? 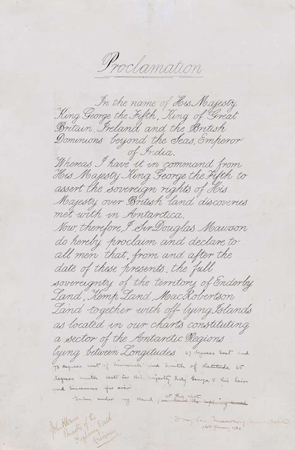 Proclamation of sovereignty rights over Antarctic territory made by Sir Douglas Mawson, 13 January 1930
National Archives of Australia, B1759, MAWSON B
Other strong elements of this exhibition deserve mention. First, there are several small interactive screens that allow visitors to choose and view footage of scientific work taken by Frank Hurley and by the Antarctic Division throughout its operations. These add a necessary dynamism and colour (literally) to the story. Second, the exhibition includes a large set of well-executed and fascinating interactive screens for visitors to explore specific sites in the Australian Antarctic, combining historic, contemporary and aerial photographs. And finally, there is a large and well-developed children's education and activity area, that adds valuable information about the physical and daily experience of work in Antarctica. 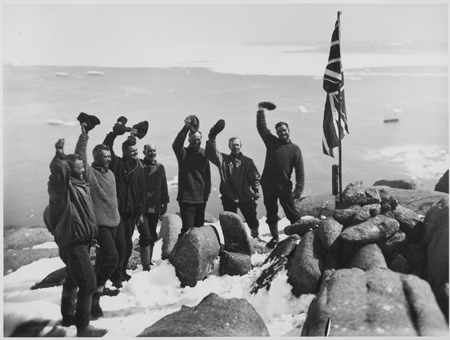 The visitor's traverse of this exhibition ends indeterminately. After the strong narrative of the first section leading to the Antarctic Treaty in 1959, the visitor is flung across the decades to the modern concerns for ecosystems, climate science and environmental protection. There is little finality: diplomatic work within the Antarctic Treaty System will continue, but there are challenges ahead; scientific work continues unabated as we race to understand and fix our global ecological crisis. By emphasising the politics of our Antarctic history, this exhibition challenges the public to consider Australia's Antarctic future. Do we go south for ourselves or for the world?

Alessandro Antonello is a doctoral candidate in the School of History, Research School of Social Sciences at the Australian National University, and is researching the diplomatic, environmental and scientific history of the Antarctic after 1945.

1 I would like to declare that during early development of this exhibition I took part in discussions between Jane Macknight (Curator, National Archives of Australia), Tom Griffiths and Marie Kawaja (both of the School of History, Research School of Social Sciences, Australian National University, and consulting historians to the exhibition).