In recent years there has been a rising interest in the history of the beach, swimming, surfing and the surf lifesaving movement in Australia. At an academic level it is reflected in an abundance of PhDs and in the publication of important articles and books, including Gary Osmond's re-interpretation of the impact of Duke Kahanamoku's impact on Australian surfing, and Douglas Booth's Australian Beach Culture: The History of Sun, Sand and Surf, a comprehensive account more sympathetic in its understandings of surfers than of surf lifesavers. At a popular level, it can be found in Paul Clarke's two-part documentary film history of surfing in Australia, Bombora, a surprising number of recently commissioned histories of Sydney surf lifesaving clubs, and in this fascinating and (mostly) comprehensive exhibition.

Surf City is organised in a multidimensional way that is original, creative and challenging. Along three sides of the gallery the artefacts are arranged in three layers. Standing against the rear walls are surfboards arranged chronologically, beginning with the long boards or 'toothpicks' of the 1940s and early 50s, followed by the early, imported Malibus; the later, locally produced (shorter and shorter) short boards; and ending with the three fin thruster. Interspersed among the boards along these walls are photos, posters and the surf fashions, including swimwear, of particular eras. In front of these artefacts are display cabinets holding more clothes and smaller photos as well as books, magazine stories relating to surfing, skateboards and even a few LP covers featuring such artists as Little Patti and the Atlantics.

The exhibition is also divided into periods. The first covers 1945 to 1960, and focuses on how, in the mid-1950s, the hegemony of the surf lifesaving clubs and of the long board were challenged by the Malibu and the individual pursuit of the search for the perfect wave: service gave way to hedonism. As the once proud owner of a surfoplane (a blow-up bodyboard) I was pleased to see one on display, although surprisingly neither bodyboarding nor bodysurfing receive further attention. I have a slight problem with beginning the exhibit in 1945, especially when we are told that 'After World War II Australia's so-called way of life left the outback and headed to the coast'. Actually, there is strong evidence that it was before the First World War that Australians began to turn to the beach as a major source of recreation, and sometime in the 1920s to identify city, as opposed to bush, life with opportunity, progress and the future. At this time, too, they adopted the lifesaver rather than the itinerant bush worker as a national icon (alongside, of course, the AIF digger) Certainly, by the beginning of the Second World War, going to the beach to sunbathe and bodysurf was a major urban recreation. 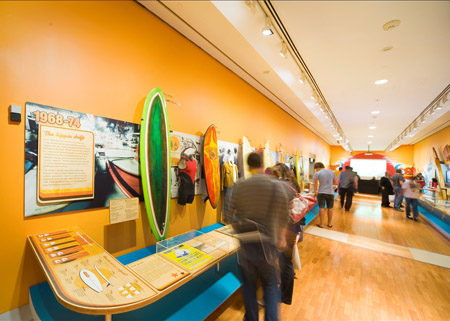 The second period, 1961 to 1963, witnesses the rise of surf mania, reflected in the popularity of 'surfaris', the emergence of surfing magazines, the first Australian built malibus, and music venues like Surf City, which featured music with surfing themes and sounds. The music scene probably deserved more attention and more context in the exhibition, given the enormous boost that the success of the surf genre performers provided to the Australian music scene generally. After all, Surf City not only promoted the careers of those who played this genre of music but also those of rockers like Billy Thorpe.

The 1964 to 1968 era features more of the same, although the cars used for surfaris are more up-to-date, the boards shorter and the swimwear skimpier. In this era, Australian surfers like Midget Farrelly and Nat Young became nationally and internationally famous and, most importantly of all, women began to take to the waves. The exhibition material relating to women and the surf is terrific â unfortunately the theme is not carried forward strongly in what follows.

So far the story is one of unproblematic progress, but in the period covering 1968 to 1974, the captions and the individual exhibits become slightly censorious in lamenting the influence of the counter culture on surfing as it became focused on cultural experience rather than competition. Here the exhibits include counter cultural clothes, 'Captain Goodvibes' cartoons and even two homemade bongs. As I was looking at this section of the exhibit, an old surfy nudged me in the ribs and said 'Mate, we smoked some good dope at Byron'. Not everyone, it seems, remembers these years as a lost era.

The last period covered is from 1974 to 1978. Here the themes relate to the rise of skateboarding as an alternative form of recreation for surfers and of the emergence of a new era of professionalism marked by the establishment of a world pro tour and big money surfing contests. The material on display in this section is quite limited and lacks dimension. And yet what it represents is of critical importance to Australian cultural and sports history because this heightened professionalism, reflected in the creation of sport as corporate business with full-time participants funded by sponsorship and television rights, was also happening in other Australian sports, especially Australian Rules, Rugby League, and cricket. By neglecting to address the topic fully, the exhibition misses an opportunity for context and depth. 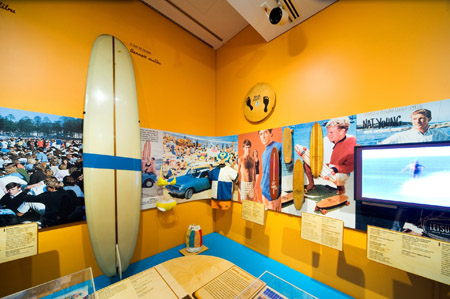 Each of the periods covered also features excerpts from surfing films of the era. Some of them are wonderful. I particularly liked Big Wednesday (1961), Now the Girls Are Taming the Waves (1964) and Morning of the Earth (1970). On the fourth side of the gallery is a mini-theatre, complete with comfortable couches, and uncomfortable chairs, showing films relating to key moments in Australian surfing history, like the introduction of the Malibu, and Midget Farrelly winning the World Championship at Manly in 1964. Reminiscences of the participants are interspersed with this film footage. These segments also focus on surfing music and movies, fashion and dance, women and competitions, surfboard manufacturing, conflicts between locals and westies, and what united all surfers â hatred of the beach inspector. I found this material absolutely riveting and the fact that it was somewhat disjointed and fragmented worked well because surfing culture is like that.

I am often disappointed by exhibitions that try to capture recent and contemporary cultural movements and events in Australian history. Too often, the objects take control, they seem to be displayed for their own sake, and their context, story and significance are lost. The curators of this exhibition have come close to locating their texts accurately, comprehensively and importantly within their contexts. The result is an exhibition that is both entertaining and educative. 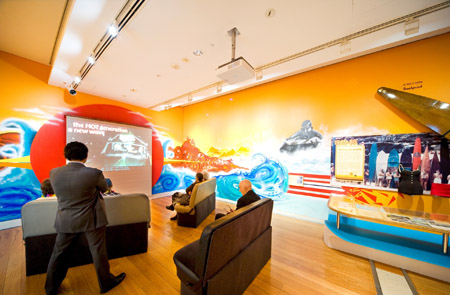 A film screening in the Surf City exhibition
photograph by Bruce Usher
Historic Houses Trust of New South Wales
Richard Waterhouse is Bicentennial Professor of Australian History at the University of Sydney.