A New Horizon offered 76 works from the past 60 years in a variety of media, including sculpture and a 3-D animation. The themes covered were varied with a strong emphasis on genre and nature but there were also portraits and abstraction. The stated aim was to provide a âwindow into the development of Chinese contemporary artâ. Covering the extraordinarily tumultuous period from the victory of Communism in 1949, the 10 years of the Cultural Revolution beginning in 1966, Chinaâs rapid economic and urban growth after Deng Xiaopingâs open door policy in 1978 to the present, with all the changes in art and art discourses in that period, was clearly an impossible task. It would need a far larger exhibition to attempt this. The curators therefore chose a specific focus. 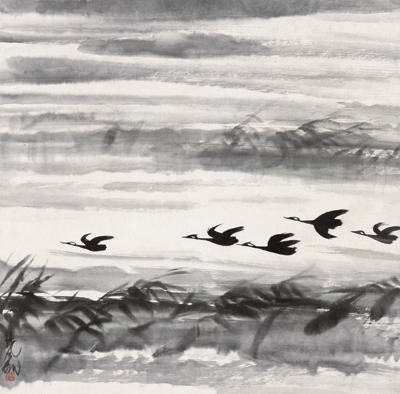 Director of NAMOC, Fan Diâan, explained in his foreword to the catalogue that the challenge was âto bring to the Australian public a different perspective on Chinese contemporary art than had previously been displayed in Australian cultural institutions â¦ we decided to create an exhibition featuring Chinese art since 1949, one that located Chinese art in the context of social and political changeâ.

Andrew Sayers, Director of the National Museum of Australia, noted that it was his suggestion to focus on the early period because, while Australian audiences have become familiar with the art of the present in China, âthe art of China in the decades from the 1950s to the 1980s is not as well knownâ.[1]This was an interesting decision on Sayersâ part and, without question, the particular strength of the exhibition is from 1949 to the early 1990s. One visitor in his 20s to whom I spoke remarked this exhibition was a revelation to those in his age group in understanding China in that era.

Sayers makes the additional point that the exhibition has many examples of works that had a major impact in China when first exhibited and key works by artists in influential positions in teaching institutions. One example is the haunting ink-and-wash painting of revolutionary leaders by senior wife and husband team Wang Yingchun and Yang Lizhou (a former Director of NAMOC). Taihangshan Steel Wall (1984) is, as the catalogue tells us, considered a âmasterpieceâ in Chinese recent art and symbolises âthe resilience of the Chinese peopleâ. Overall this was very much an exhibition of art considered important in China. 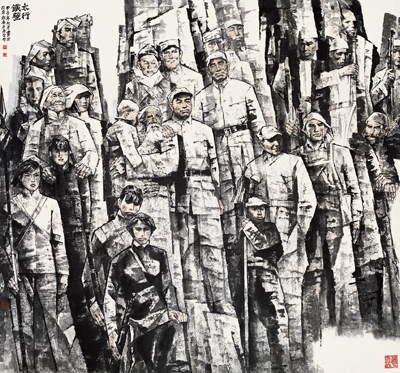 The exhibition was divided into three sections: âNew Chinaâ (1949â77), âNew thinkingâ (1978â99) and âNew centuryâ (2000â09). Chinese modern art developed after the overthrow of the Imperial Dynasty in the Revolution of 1911. Chinese artists began to travel and study abroad and Western oil painting was introduced into the art academies. After the establishment of the Peopleâs Republic of China in 1949 the role of art was defined as being to âserve the peopleâ. Socialist realist styles were adapted from the Soviet Union. Traditional art styles, especially ink-and-wash painting, continued and the exhibition contains many fine examples, including Red Lotuses (1951) by Qi Baishi, an artist whose career spanned the Qing Dynasty, the Republic and the Communist era, and whose works now command extraordinary auction prices. 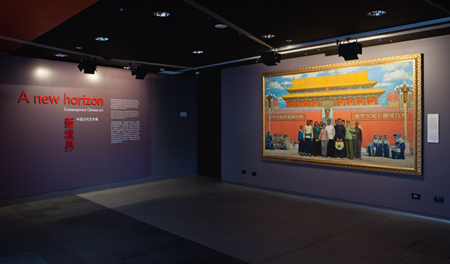 In his public lecture, Fan Diâan suggested that while some have described art since 1949 as under the control of ideology, much was a genuine depiction of the hopes of the new nation. An example cited was Sun Zixiâs Group Photo at Tiananmen (1964). It depicts ordinary Chinese, now the âmasters of the nationâ, posing in front of what was once the main gate of the Imperial Palace. Many other works in the early period do transcend ideology, as in Pan Heâs bronze Hard Times (1957), showing a barefoot young soldier listening to the flute played by an older comrade. 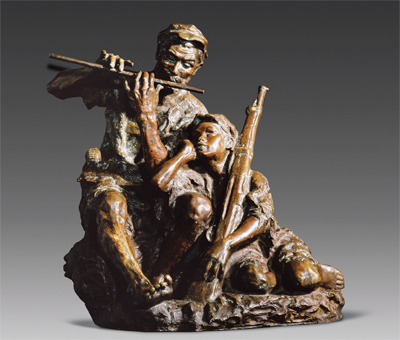 Hard Times, 1957
by Pan He
National Art Museum of China

The propagandist kitsch of the Cultural Revolution, however, is evident in Zhou Shuqiaoâs Spring Breeze and Willow (1974), presenting a joyous bunch of young intellectuals from the cities arriving in a village, to be re-educated by the peasants. The catalogue tells us that the title refers to new beginnings. 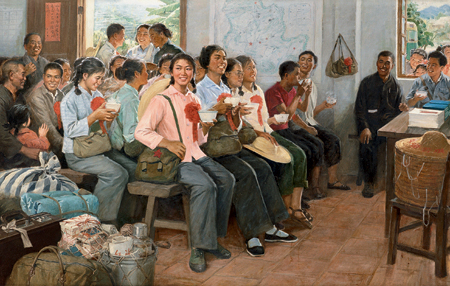 Spring Breeze and Willow, 1974
by Zhou Shuqiao
National Art Museum of China
Truth was not an issue in Cultural Revolution fantasy but the idealism of the millions of youth who went to the countryside may have been echoed in this scene, although the reality for many was quite the opposite. Evocative of this is He Duolingâs Youth, painted in 1984, showing a young woman in a tattered military outfit, sitting awkwardly in an empty field, wearing an expression of utter hopelessness. 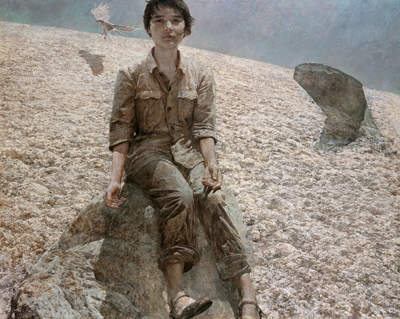 Youth, 1984
by He Duoling
National Art Museum of China

Cheng Conglinâs Snow xx 1968 (1979) is also the antithesis of Spring Breeze and Willow andemerged from the time when the Cultural Revolution was repudiated. The title is the same as that of a much-discussed poem of Maoâs on the theme of history and heroes. It shows a violent urban street fight between youth during the Cultural Revolution. Other strong works reflecting the drama of the human condition include Liu Xiaodongâs Blind (1994), depicting a thin, shirtless blind man feeling his way along the road with a truck of cheerful passengers coming up behind him. One is left to speculate whether their intention is to help, ignore or jeer him. 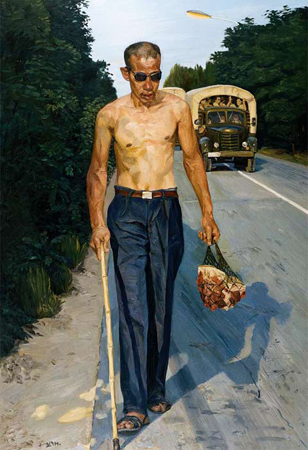 Xu Jiangâs Big Beijing-Old Wall (2001) is an especially powerful treatment of historical landscape. Wang Yanâs Chicken Feast (2005) can only be a bitter exercise in irony, with its study of a farming couple beneath a dark sky with a city in the background, heartbroken at having to burn their chickens and thus destroy their livelihood, presumably to resist the spread of avian flu. This contrasts with the many artworks in the exhibition inspired by nature or exploring inner worlds, such as, for example, the lyrical and poetic Girl Leading a Horse (1999) by Wang Lan, an artist now living in Australia. 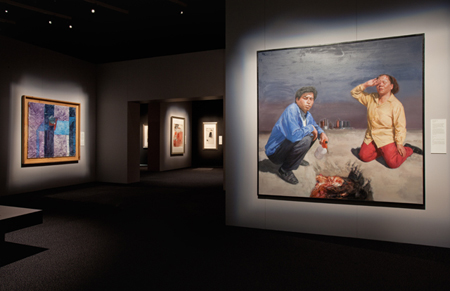 A view of the exhibition, with Wang Yan's Chicken Feast (2005) in the foreground
National Museum of Australia

The largest painting, and for me the highlight of the exhibition, is Shen Jiaweiâs Red Star over China (1987), inspired by the book of the same title by Edgar Snow, first published in 1937. 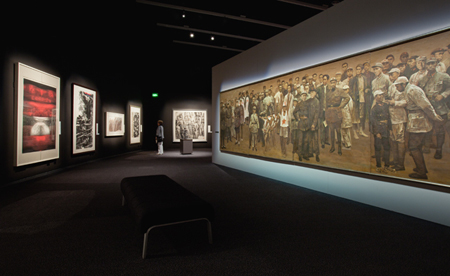 Shen has spoken movingly on his motives for undertaking the work after reading a banned copy of Snowâs book. He emigrated to Australia in 1989 and has made a major reputation here as well as in China. The painting depicts almost everybody involved in the direction of the early Communist Revolution, comprising, in Shenâs terms, some â104 real historical personsâ. There are some absentees, namely those who had lost favour in the eyes of the authorities, in particular Hu Yaobang. Shen asserts that âwhat is painted here is the first act of a tragedy. The fine quality, beauty, youthfulness and ideals will be destroyed by later acts which are yet to be paintedâ.[2] The most intriguing aspect of this enormous painting must be the positioning of Mao, as an equal not as a âdemigodâ, seemingly even dilettantish, cigarette nonchalantly in hand, dressed informally and behind the heroically commanding figure in military uniform of Zhou Enlai. 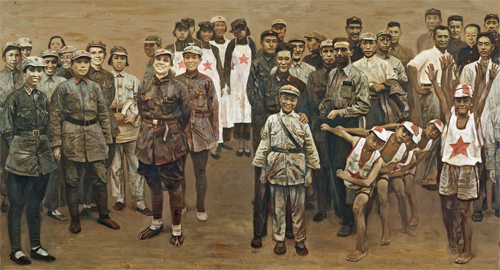 Two of the six panels of Red Star over China, 1987
by Shen Jiawei
National Art Museum of China

In his brilliant study In the Red Geremie BarmÃ© notes the clash between official culture and many intellectuals, artists and dissidents in China since the late 1980s.[3] Missing from the last section of the exhibition were various movements from the late 1980s to the present such as the satirical social and political criticism of the 1990s âMao Goes Popâ artists or the often raucously irreverent offerings of the liumang (âhooliganâ) artists. I would also like to have seen more art challenging boundaries and reflecting contemporary social change and intellectually profound works confronting memory and history, such as Yang Fudongâs films or art exploring the legacy of the Cultural Revolution, for example by Zhang Xiaogang, who explored idealism in the service of ideology in his androgynous paintings of young people wearing Mao suits and with utterly blank faces.

Although such works have been shown previously in Australia, their inclusion would have contributed to the theme of âsocial and political changeâ. There is no doubt, however, that the exhibition served to extend our awareness of the enormous range of Chinese contemporary art and was well received by visitors.

The enthusiastically attended public programs accompanying the exhibition included the lecture by Fan Diâan, a major conference organised by the Australian National Universityâs Australian Centre on China in the World and childrenâs art workshops. Although the National Museum of Australiaâs temporary exhibition gallery provides rather cavernous dark spaces, the display of the exhibition was good but would have benefited from more information available to visitors on both the art and history, such as computers within the show or an audio guide to supplement the very short introductory wall panels.

This was an important exhibition demonstrating a commitment by the National Museum of Australia to displaying the culture of our Asian neighbours and art as a means of enriching our understanding of history and social change.

Caroline Turner is a senior research fellow in the Research School of Humanities and the Arts, Australian National University, a former member of the AustraliaâChina Council and project director of the Asia-Pacific Triennial exhibitions in the 1990s.

1 Major exhibitions of contemporary Chinese art seen in Australia include: New Art from China: Post-Mao Product, curated by Claire Roberts (1992); the six Asia-Pacific Triennial exhibitions beginning in 1993; The China Project, curated by Suhanya Raffel at the Queensland Art Gallery (2009); Mao Goes Pop: China Post-1989, Museum of Contemporary Art (1993); the Sydney Biennale from the 1990s; Inside/Out: New Chinese Art, Asia Society New York, shown at the National Gallery of Australia (2000); exhibitions at 4A Centre for Contemporary Asian Art over two decades; exhibitions at the Sherman Foundation; and the forthcoming exhibition of Chinese portraits at the National Portrait Gallery in 2012.
2 Artist statement 2011 available as a handout in the exhibition.
3 Geremie R BarmÃ©, In the Red: On Contemporary Chinese Culture, Columbia University Press, New York, 1999.