Is beauty a rare thing in the built forms of remote Australia? Photographer Martin Mischkulnig and writer Tim Winton seem to think so. Their travelling exhibition, Smalltown, places Mischkulnigâs images in dialogue with Wintonâs words. Excerpts from an exhibition essay by Winton are displayed on the walls alongside photographs by Mischkulnig.[1] Smalltown, introductory text explains, seeks âthe unsentimental realities of remote settlementsâ, where natural beauty and cultural ugliness are common, opposing categories, and âplastic chairs seem as ubiquitous as corrugated ironâ. 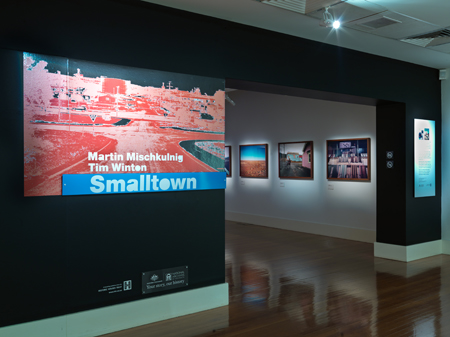 The photographs are printed large, in landscape format, and appear in simple timber frames, suggesting traditional modes of representing soft, picturesque terrains. Contrast is built between this common mode of landscape representation and the particular visual content: the hard lines of industrial modernity in isolated places. Lighting in the exhibition space is subdued, each photograph individually lit. This treatment suits the large-format colour photographs, most of which Mischkulnig took in the gentle light of evening and early morning. Long shadows, details, subtle colours, textures â all are beautifully visible. 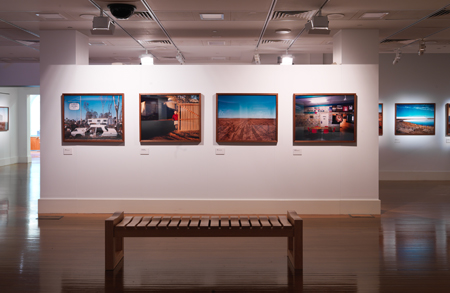 In a video presentation inside the exhibition, Mischkulnig explains the capacity of large-format photography to capture the intricate details of a place, the patterns perceived by the human eye. As in the wonderfully detailed works of contemporary Australian landscape painters Christine James and Mandy Martin, the representation of intricacy asserts the value of places that arenât the âmiddle of nowhereâ, as often represented. No, these places contain things worth seeing closely. 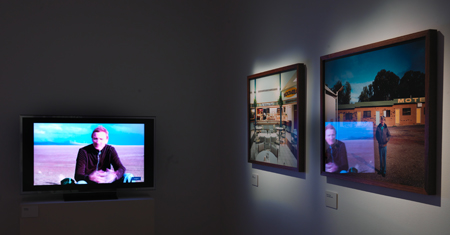 Mischkulnig grew up in small South Australian towns where his parents ran roadside motels. His childhood places âwere never destinations in themselvesâ, explains the exhibitionâs introductory text, âbut places on the way to somewhere elseâ. As a receptive child, places devalued by Australian society spoke to Mischkulnig. His photographs are a respectful reply.

I found myself troubled by contradictory messages encountered in the exhibition. Perhaps its creators could not entirely escape the influence of popular mythologies of remote Australia. At the entry, visitors read that Winton âchallenges the impermanence and built ugliness he finds far too common a feature of Australian rural existenceâ. Inside the exhibition, Winton blames such ugliness on the hardy folk of small towns, who âfear beautyâ. In the video, reading from his essay, Winton contradicts this brutal assertion by acknowledging a broader context to the social and ecological realities of places isolated from major population centres. While farmers and miners hold a âbarely repressed prideâ, Winton reads aloud, in their âworks of creative destructionâ that produce âthe prosperity and order of our citiesâ, there is âa darker legacy ... in the regions: open-cut pits bigger than towns, spoil heaps, mine-heads and shafts, toxic tailings-dams, treeless vistas where vast woodlands once held sway, encroaching veins of salt, barbed-wire fences, the dominance of the hard edge and the right-angle where none exist in natureâ. As Winton himself appears to recognise, the ugliness he sees in isolated places is perhaps then not the fault of those who live there, but an outcome of colonial and modern processes of commerce and industrial extraction that consolidate economic and cultural power in large urban centres. 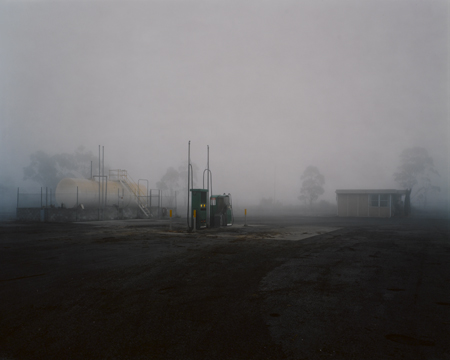 Mischkulnigâs photographs demonstrate awareness of these broader processes that shape the realities of isolated communities. One photograph taken in the sparsely populated Lynchford district of western Tasmania shows a rundown, inhabited house. The weatherboard structure rises before a dark terrain of forested, misty hills. Beer cans are displayed in a casual but decorative manner on the decrepit house and within the unkempt yard. On the ridgeline above the house, the edge of a pine plantation reveals that an industrial monoculture now grows where a diverse array of indigenous plants and animals once flourished, on the other side of the sublime hillside. And in the foreground, so close to the house, lie railway tracks, a strident manifestation of globalised economic forces, blind to local particularities and the needs of places, serving only market powers consolidated elsewhere.

And what of beauty? I see beauty in Mischkulnigâs images, and not just in the gentle colours and textures of plants and rocks. Rows of striped canvas chairs feature in a photograph taken at the outdoor cinema in Meekatharra, Western Australia. The built forms are functional and tidy, and with the varied array of patterned canvas bowed across chair frames, the scene is comfortable and aesthetically pleasing, to my eye at least. Another image, captured in a Top End cafe lit by fluorescent tubes, shows a mural of Nitmiluk, also known as Katherine Gorge. The carefully painted vista of cliffs, waterlilies and galahs is background to clean surfaces and sturdy chairs. The aesthetics are probably not fashionable, but they speak of respect for place and for people. 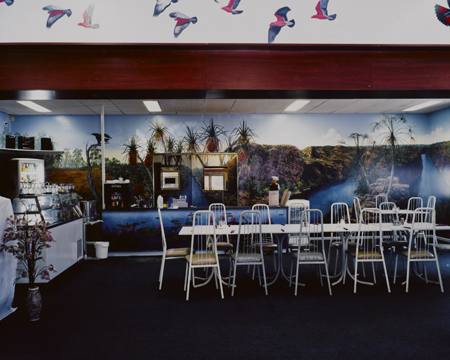 Similarly, a photograph of âThe Outback Dinerâ in the South Australian settlement of Woomera, where weapons testing by the British Government after the Second World War left a deadly radioactive legacy, shows a neat restaurant, the furniture and decor decades old perhaps, but clean and well maintained. I was particularly struck by the vases of fresh native flowers standing on each table. The presence of beautiful flowers, presumably grown in a nearby garden, picked and thoughtfully arranged, recorded the graceful activities of a local resident who loved and nurtured flora that could flourish in the dry soils of Meekatharra, plants that could grow without support from modern watering systems and synthetic fertilisers trucked from distant factories.

âSmalltownâ is an odd title, evoking images of âSmalltown Americaâ, where good soils, reliable weather patterns and dense populations have spawned a distinct cultural pattern. The Australian settlements depicted in the exhibition are the product of different dynamics, of commercial and industrial ties between populous, powerful urban centres and distant, sparsely populated places. The exhibitionâs title creates a false category and demands that we think of boundaries and divisions instead of the pathways and connections that shape the scenes shown in Mischkulnigâs images. Ugliness is not confined to places outside the borders of urban Australia. A deeper ugliness has long operated within the hearts of modern cities, where blind and relentless exchanges of globalised commerce extract and erase the souls of distant places.

George Main is a curator at the National Museum of Australia.

1 Wintonâs essay is published in a coffee table book that contains Mischkulnigâs photographs.