I first visited this exhibition as one of the 'persons of interest' referred to in its title. Apparently there was a flurry of us in the first few weeks. I grew up in the 1950s with my father, Russel Ward, under surveillance, and was spied on myself throughout the Vietnam War protest period in the late 1960s and early 1970s, which coincided with the early years of the Women's Liberation movement.
My second visit was as a reviewer.

The simple fact that such an exhibition had come into existence at all is newsworthy. For persons of interest, it is an absolute paradox, since the very basis of all ASIO's activities is that they are secret. The files amassed are protected information. So even though the exhibition is based on files that have passed their 30-year use-by date, the fact that there is any kind of ASIO display for public consumption is gratifying beyond compare.

The curator of the exhibition, Haydn Keenan, spent five years researching the files and has made a film due for release in 2012. In adapting his material to an exhibition context, he appears to have had three main aims. First was to outline the genesis and development of ASIO from its inception in 1949 to the end of the 1970s. The second was to describe ASIO's activities in its heyday of the late 60s and early 70s, and to provide a sense of its intrusion into the everyday lives of people who did not know when or how they were being watched. The third was to raise questions about the role of secret police in a democracy and thereby warn about its dangers.

The exhibition, open for just 10 months, is housed in the Justice & Police Museum, a splendid Georgian building of yellow sandstone on the tiny rise at the east end of Sydney's Circular Quay. The first two rooms contain Persons of Interest, while further back in the building are other permanent exhibitions, a series of mug shots and manacles from the convict era to recent times.

The storyline begins with the founding of ASIO in 1949. Prime Minister Ben Chifley, convinced by the United States government that there were people in Australia who were part of a spy network supplying information to the Soviet Union, established the Australian Security Intelligence Organisation to identify and deal with spies. ASIO embarked on the 'Venona Project', conducted in conjunction with the Americans, and it did find two Australians who were sending information to the Russians. They were never prosecuted, however, because to do so would reveal the existence of Venona â clearly, the need for the organisation to keep its activities 'secure' was more important than actually bringing charges against anyone. Perhaps this historical moment highlights the eternal conundrum of security organisations: a kind of impotence that leaves nowhere to go except down more secret alleyways, building bigger and bigger files.

The rest of the first room moves on to describe the full flowering of ASIO and its obsession with leftist opinion of any kind. It contains samples of the surveillance applied to particular families or individuals in the form of text panels, photos, film footage and diagrams. There is also a stand with photocopies of pages from an actual file, which visitors can handle. Here they can find a whole page devoted to the one-line entry: 'Frank HARDY has a new Holden car (on 29 August, 1955)'. Seeing and touching a page like this attests more tellingly to the banality of much of the information that was gathered, than all the claims or descriptions.

A 'whole file' of someone such as activist and Labor politician Meredith Burgmann, for example, who was watched very closely, might have stopped people in their tracks â half a metre high, possibly? It might have raised questions such as who was authorised to spend so much money on spooks, cameras, typists and multiple copies? The decision to focus on a handful of well-known names â Frank Hardy, Michael Kirby, the Milliss family, for example â was no doubt made as a means of engaging visitors' interest. The result, perhaps unintended, of individualising the stories in this way is to highlight particular families or 'names' and thereby reinforce the impression of 'dangerous individuals', rather than the out-of-control network-sleuthing that ASIO activities became in this period.

More could have been made of the sheer scale of the undertaking. My own file, for example, reports a phone call with a friend in Women's Liberation during which I asked her how her thesis on George Eliot was going. The compiler of that file has bracketed 'Who is George Eliot? Where does he live?', unwittingly emphasising the central focus of much of their work: identifying names and addresses and phone numbers ad infinitum. Collected, filed away, gathering dust. 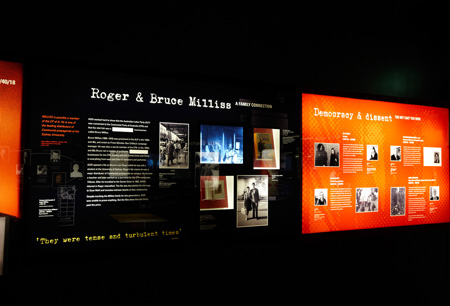 We are told that half a million people attracted ASIO's attention during the 30 years after its creation. Perhaps an interactive display of 500,000 pinhead dots could have represented this number, with visitors being asked how many of these people might have lived in their suburb, or been known to their family. The non-politically aware visitors â a busload were going through while I was there, many looking somewhat mystified â might thereby have gleaned more of the import of what they were seeing.

I heard Haydn Keenan in a media interview, talking about the file opened on the Mothers' Club of the Garden Vale Primary School in Melbourne in 1954. This group scored a file because one mother had the temerity to ask, 'Why do we have to put up decorations for the Queen?' This story, sadly, is missing from the exhibition. It could have had a panel with a multiple-choice question: Who reported this mother to ASIO? Another mother? One of their husbands who heard about it? The school principal? An ASIO officer who happened to be walking by? And then the answer: we can't know, because the identity of informants is still 'confidential', which means the name is blacked out in the file that is now on the public record.

This story would have helped the curator with his central argument: that ASIO quickly slid from looking for real spies to being a cultural and political arbiter of the population at large. The picture of a young David Stratton, now one of Australia's best known film reviewers, and the story of his file being opened when he went to Moscow to look at Russian films, is one example of such folly. It needed more of these.

The second room is smaller and has been set up like an office with a desk in the centre, phone and typewriter at the ready. I saw several people walk in and start in surprise, so real is the sense of an actual working space. Two of the walls are facsimiles of shelves of files, giving a palpable sense of the compactus shelving that presumably once existed in a secret warehouse somewhere on the fringes of Canberra or Sydney or Melbourne, bursting with secret, useless information. (The files are now held by the National Archives of Australia, where they can be accessed by anyone. They are a key resource for historians of left-wing activity and also a standing monument, as the exhibition is trying to show, of the folly that secret services can become.) There is also, in this room, the voice of a retired operative reflecting on their training methods and whether the target knew they were being watched. On the whole, he thought we did not. 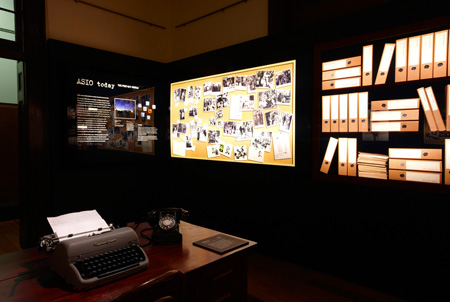 Across the exhibition, there are 10 or more screens showing film footage of what perceived 'hot spots'. Typically, there was a fixed camera pointed at the doorway of a suspect organisation or a drawn-out shot of a pair of stiletto heels belonging to a woman sitting on a bench waiting for someone. These films are grainy, even soupy and utterly, utterly boring. None of them are contextualised, except for vague geography, as in 'Coogee' or 'Day St' (the Communist Party of Australia's doorway). It might have enhanced their impact to have reduced the number to two or three, and accompanying them with text identifying the subject of the film and any available information as to why ASIO was concerned with this particular person on this specific day. It struck me as another opportunity lost. 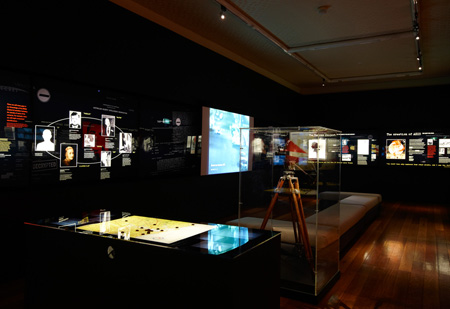 There were several weeks of hoop-la when the exhibition opened, with an extraordinary amount of media focus, which has all died away. This could be, in part, because there is little in the way of 'add-ons': no accompanying publication, no educational website specifically tied to the exhibition, just some 'related events' as listed by the Museum website.

In conclusion, the exhibition appears to partly meet its assumed aims. Yes, it gives a succinct account of the foundation of ASIO and its subsequent obsession with leftists of any hue. In attempting to describe what its surveillance machine was like in its heyday, it speaks more to the initiates, the watched and the academics, than to the general visitor. The lack of interactivity weakens the impact of this central thrust. The exhibition raises the legitimate question of the role of surveillance and the need for secret police in a democracy, but could have taken this further. As a wall text says 'There was so much raw information pouring into ASIO that there was not enough capacity to analyse it. Unproven claims were placed into the files and could never be removed'. This could have been exemplified with a particular 'claim' that would help a visitor to arrive at questions about democracy and freedom for themselves.

There is an uneasy balance in the tenor of the exhibition between the outrage expressed at 'the dark biographies written by someone who neither liked nor trusted the person of interest' and the scorn at how ridiculous and futile much of the surveillance was. Are we, then, to be enraged at the implied injustice or dismissive of such folly?

Overall, the very existence of this exhibition is a milestone in our political history. It is a useful resource for the diligent visitor who will be required to join some dots. In terms of the third aim of the exhibition, to raise questions about the role of secret police in a democracy, a casual visitor could miss the fact that the curator is arguing that the surveillance in this period of our history was ludicrously irrelevant to any real concerns about Australian security. This question could have been rendered more tangible by the use of more engaging interactive technology and sites for raising questions. The power of the 'office' in the second room attests to the impact of a tactile and visual reconstruction.

As a 'person of interest', I enjoyed the exhibition because it created a site of recognition and nostalgia â for our activities and our rage. As an adult educator, I was frustrated at how much more effective the exhibition could have been as a learning tool and a site for provoking discussion about issues that are still relevant today.

Biff Ward is a writer, an activist and a grandmother.