In the early years of the twentieth century, East Kimberley cattle could not be overlanded to the thriving markets of Perth and the Kalgoorlie goldfields because they were infected with redwater fever caused by cattle tick. Seasoned bushmen suggested that if the cattle were overlanded south from Hall's Creek along Sturt Creek (Paruku) inland to Lake Gregory (Tjurabalan) and across desert country to the Murchison goldfields the infection would cease as the tick perished. The Western Australian government thought well enough of the plan to despatch a veteran surveyor, Alfred Canning, to mark out a stock route. Between 1906 and 1910 two parties led by Canning located soaks and sank wells along the way. Local Aboriginal people were coerced, usually by keeping them thirsty, into identifying sites. Many of the watering points precious to them were made unusable. 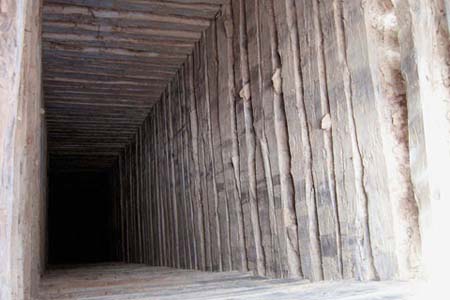 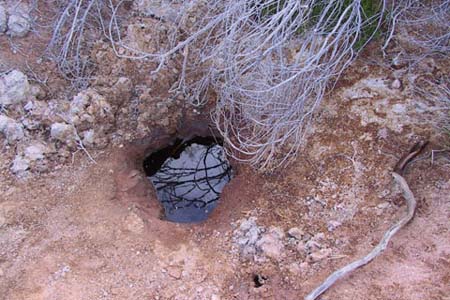 Hostilities followed. Aboriginal people sabotaged the wells. The first drovers to take cattle down the Canning Stock Route were fatally speared. In the next 20 years only about eight parties made the trek. In 1929 William Snell was commissioned to to repair the neglected watering-points — he made sure that they were accessible to the local people. When Snell became ill, the government despatched the 69-year-old Canning to complete the job. From then on the route was regularly used, especially during the Second World War. Mining exploration followed during the 1950s and 1960s. The people of the desert met modern technology: a painter named Helicopter Joey Tjungurrayi got his name when as a sick child he was flown to the Balgo mission.

The Canning Stock Route became a permanent and prominent feature of the landscape. To some, like Morika Biljabi at Well 33, the Canning Stock Route 'cut their country in half'; but for others it was 'the road [that] brings people together'. If it brought many newcomers into the desert regions — and today outback tourists may undertake guided camping trips along the length of the stock route — it also provided one of the avenues by which the original inhabitants moved away. Today desert people live at either end of the stock route in communities at Mulan, Balgo and Wiluna, while many more live several hundred kilometres away, at Fitzroy Crossing and Jigalong, and even as far away as the coastal community of Bidyadanga. 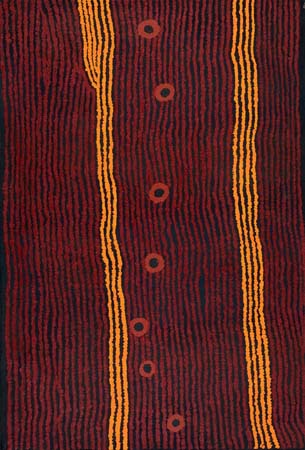 The story of Rover Thomas was typical. He went with a drover to the Kimberley and settled at Warnum, where in the 1970s he developed the style of painting ochre on canvas. But his sister, Nyuju Stumpy Brown, herself an artist of merit, settled at Fitzroy Crossing, another sister with her children went to Bidyadanga, and his brother at Jigalong lost contact with him until he saw his photograph in a newspaper and a meeting followed. All four siblings found inspiration for painting in the country they left behind, although it was often many years before they revisited it. Though they had left the desert country they retained a very strong attachment to it, and they were not the only ones. In 2008 when the traditional custodians of one of the watering-points died without heirs, the senior men of two neighbouring groups went back to the area to ensure that the necessary rituals continued to be performed. 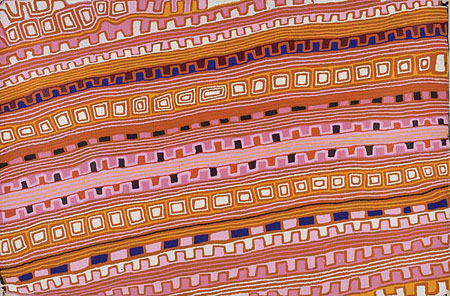 In 2006 Lynda Dorrington became the executive director of an ethnically diverse group in Perth working under the name FORM. Their ambition was to bring artists to workshops along the Canning Stock Route, where they could produce paintings and weavings inspired by the myth and history of the route and the surrounding desert. Generously supported by BHP Billiton Iron Ore and the Western Australian government, they were able to organise on-site workshops of over 70 creative artists in 2007 and 2008, leading to an explosion of productivity. The National Museum of Australia committed itself to buying the entire oeuvre. These works, supplemented by explanatory videos and photographs, form the content of the Yiwarra Kuju exhibition shown at the Museum between August and December 2010 and scheduled for exhibition elsewhere in Australia. 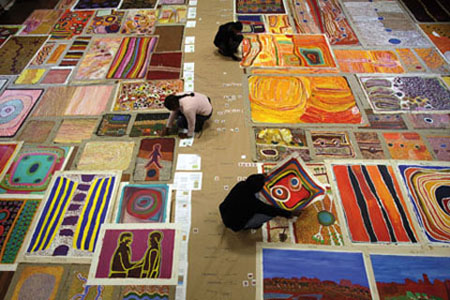 The exhibition is a splendid collective achievement. Like many Australians, my knowledge of Aboriginal art has been picked up on a piecemeal basis, so that I often look at a picture without knowledge of the features of its place of origin. By concentrating on one region, this exhibition enabled the lay viewer to discern how landscape, myth and history (or all three of them overlapping) could be translated into symbolic representation. A few paintings could be called naturalistic, but even a representation of a horse's head conveys the startling, if not terrifying impression that such an animal made when it first appeared among desert people.

I found the display generally user-friendly except that some of the captions were placed below the eye-level of the average viewer. The introductory video and photographs accompanying the exhibition are helpful as background without overwhelming the viewer with superfluous detail. I was particularly impressed with two three-dimensional maps, one of the Canning Stock Route itself and the other of Sturt Creek at its northern end. The former (under glass) was enlivened by small colonies of the insects likely to be encountered along the way. Altogether Yiwarra Kuju sets a high standard of professionalism in communicating across the cultures of Australia. Most important of all, the work of these artists illuminates a modern debate which has often been both heated and shallow. They show how Aboriginal communities may retain strong cultural links with their country even when it is no longer a practical proposition to live in it all the time.

Geoffrey Bolton is emeritus professor and senior scholar in residence at Murdoch University. His first piece of postgraduate research was a history of the Kimberley pastoral industry.
« back :: next »