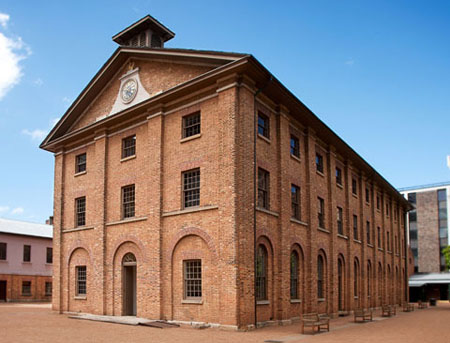 To enter the front door of Sydney's Hyde Park Barracks, in the heart of the city, is to be struck with the bare elegance of the building, its vivid orange brickwork and its fine proportions. Even Commissioner John Thomas Bigge, usually so jaundiced when it came to Governor Macquarie's building projects, called the barracks 'simple and handsome'. While the building is wonderful, meaning has to be squeezed out of it somewhat. Unbidden, it has much less to say to the visitor than, say, the collected edifices of Port Arthur. It was built in an earlier, less ambitious period of convict confinement, 1819 rather than the 1830s and '40s, and in the middle of town rather than in a place of dramatic isolation. Simple and handsome, the Hyde Park Barracks lack the tone of high drama, enigma and suffering that inevitably haunts Port Arthur. Also, at Port Arthur the main exhibit is of buildings and setting combined. At Hyde Park the main exhibit is one building, or rather a building interior, with a precinct that works mainly as a frame for the barracks proper.

The current display at Hyde Park Barracks confronts this problem with the overall title, Convict Sydney, as if its managers and curators had originally hoped to make the building into a prism through which a certain urban way of life might be better understood. But the point is not pushed very far. All three floors are taken up with the Convict Sydney exhibition, but only one large room on the first floor explicitly uses the theme 'A convict town'. It features, as a floor covering, a greatly magnified copy of a town map of 1822 and, filling one end of the room, James Taylor's superb panorama of Sydney, also dating from 1822. Other exhibits in this room are few and miscellaneous, including an item on family history and descent from convicts. Overall then, the idea of convict Sydney is only very tentatively explored, in spite of the exhibition's title. 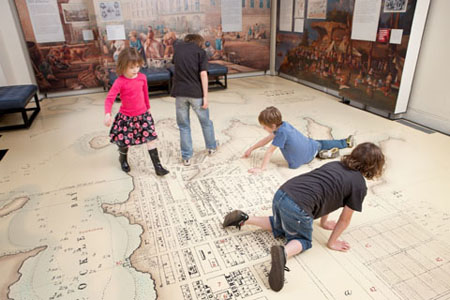 Port Arthur, to the visitor, seems scattered and spacious, and the most obvious form of punishment is complete isolation, as dictated by the new penology of the day — isolation within wide horizons. At Hyde Park Barracks we might expect to experience the very opposite: crowding and clutter, bureaucracy certainly, but bureaucracy constantly invaded and overridden by human exigency, including constant interaction with an equally cluttered town. The idea of clutter, of intense smells and noises, appears now and again on all three floors of the exhibition. It's obvious on the first floor, where we see packed bundles of old rag and rubbish accumulated over the years by rats and preserved hitherto below the floorboards.

Given that the desiccated corpses of rats are among the archaeological exhibits, the visitor is tempted to make direct connections between their underfloor existence and Sydney's embryonic underworld, including the barracks, but it is not an association the exhibit makes use of. One of the nodes of criminal life in London at the time was called 'Rats' Castle'.

A clutter of sensation is also evoked on the second floor, where one large room is taken up with hammocks, row on row hung close together, as we might imagine them during a convict day, waiting empty for the return of the men. In other rooms there is a great deal to read — maybe too much — but in this room there is very little. Nor is there any attempt to show anything else. The resulting impact is powerful and direct. This is the exhibition at its best. Across the corridor is a room of matching size and shape. It is empty, except for a plastic clothes basket full of clothes, which might or might not be convict clothes, and a good number of full-size human shapes in silhouette, all of them male, each representing a real convict inhabitant of the barracks, whose emotional state is depictured by the 'mood and gesture' invested in each cut-out. Overall the visitor hears a murmur of voices, which being both male and female confuses the point of the cut-outs, besides conveying no particular sense or feeling.

This last-mentioned room, its relative emptiness, its flatness, its mild confusion, is symptomatic of the exhibition as a whole. A few rooms have a single, straightforward purpose, and they work well. The roomful of hammocks is one. Another, on the first floor, displays archaeological work on the site. But too many rooms try to do a number of things at once, and in inconsistent ways. On the ground floor, one room has two large murals, one showing hulks in England and the other, the barracks, both characterised by stereotypical depictions of human and animal life in the period; plus a wall hung with the tools used by convict men; plus a flogging triangle, small enough for children to try it out on each other, which they do, with various degrees of enthusiasm. 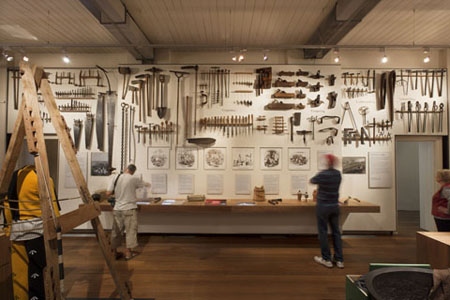 Much of the exhibition is targeted to children. It is designed to be fun. This seems to be where the fundamental problem lies. It is a hard fact that convicts, and perhaps colonial history as a whole, is much less interesting to Australians than it used to be, say, 20 or 30 years ago. A museum is a conversation. The two parties are the managers and curators on the one hand and the visitors on the other. If visitors are not inclined to think very hard about the moral complexities of the convict experience and its importance for the national story then it is pointless to ask them to do so. This exhibition therefore aims small. The invitation on the website is subdued and undemanding: 'Learn about the forced transportation of convicts,' it says, 'their daily lives and how they built the colony'. The experiences of convict life are apparently painless. 'Wander the streets of 1820s Sydney on our giant map, try on a set of leg-irons, lie in a convict hammock' — the verbs ('wander', 'try on', 'lie') evoke a dreamy aimlessness radically different from the real convict Sydney.

I remember visiting this museum 15 or 20 years ago, when the sounds broadcast among the silent hammocks were not a medley of faint voices but, every few minutes, a racking, phlegmy cough, ugly and deeply memorable, evoking a mass of tightly packed men, sleeping and partly sleeping, much more vividly than anything currently on show. Is there anything to prevent that room being filled, say, with a smell evocative of unwashed labouring men, such as it must have contained, day-in, day-out, for many years? That would spell out rather nicely the crowded clutter that surely ought to be the prevailing theme of an exhibition in Hyde Park Barracks with a title such as 'Convict Sydney'.

Even if children must be the main target audience, need the educational experience be so gentle, so inoffensive, and therefore so forgettable? Why not invite all visitors, including children, to stretch their minds, imaginations and human sympathies in some of the many ways offered by convict history? We owe it to the convicts to make that effort.

Alan Atkinson is an emeritus professor of history from the University of New England, senior tutor at St Paul's College, Sydney University, and author of The Europeans in Australia.
Related links
> The Governor
« back :: next »