The year 2009 marked the centenary of the 'discovery' of the south magnetic pole in Antarctica by members of Ernest Shackleton's British Antarctic Expedition. The South Australian Maritime Museum at Port Adelaide has curated a travelling exhibition, Quest for the South Magnetic Pole, to celebrate that anniversary, drawing objects especially from the Douglas Mawson Collection at the South Australian Museum in the city of Adelaide. This review considers the exhibition as displayed at the National Archives of Australia, Canberra.

The idea that the earth was a magnet was first proposed by the English scientist William Gilbert in 1600. Gilbert's revelation was followed a century later by Edmund Halley's work on compasses and navigation in the South Atlantic Ocean. Yet another century passed before substantial interest was renewed in the early nineteenth century: with encouragement from Alexander von Humboldt, Carl Friedrich Gauss took an interest in magnetism and, with Wilhelm Weber and Edward Sabine, moved knowledge along with the formation of the Magnetic Union, and a program of worldwide data collection. In the 1830s, during a burst of Antarctic exploration, French explorer Dumont d'Urville, American Charles Wilkes, and Briton James Clark Ross all sought the magnetic pole. Towards the end of the nineteenth century Carsten Borchgrevink, Louis Bernacchi and Erich von Drygalski also played a small part in the quest, undertaking magnetic observations in Antarctica.

The major breakthroughs in the quest for the magnetic pole came with three expeditions — and these form the heart of the exhibition. Ernest Shackleton's British Antarctic Expedition (1907–09) included one party led by famed Australian geologist TW Edgeworth David, as well as his young protégé Douglas Mawson and Scottish doctor Alistair Mackay. This party reached the general area of the magnetic pole on 16 January 1909; they even went so far as to raise the flag and claim the area as British territory. This flag, from the Australian Academy of Science, is on display. They certainly got close to the pole, but how close remains uncertain; it is now thought that the party came within 130 kilometres. The second breakthrough expedition was Douglas Mawson's Australasian Antarctic Expedition (1911–14). Its Southern Party, led by Robert Bage and including Eric Webb and photographer Frank Hurley, trekked to within 63 kilometres of the magnetic pole. The third breakthrough expedition was almost 90 years later, by which time the pole had moved into the Southern Ocean. Charles Barton, an Australian scientist who had dedicated several decades to reaching the pole, came within 1.6 kilometres of the pole in December 2000. 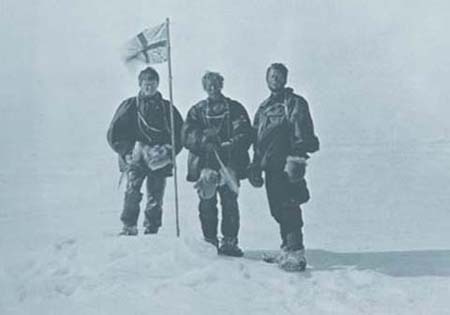 The exhibition conveys all the above information effectively and concisely.[1] The basic science of geomagnetism is explained, the long history of magnetic studies is evident, and the three major expeditions are described in detail. With its compelling story, its rich collection of objects, and its deftly written interpretive panels, this exhibition has a strong foundation.

Yet in spite of its rich assemblage of objects, most with intimate links to the quest for the pole, I felt the exhibition did not deploy these objects to best advantage. Charles Barton's sensor is a case in point. This massive object has at its heart three fluxgate compasses that measure the magnetic field along three axes. Surrounding these are coils through which electric currents are passed to compensate for the magnetic field of the ship it was carried on. Combined with the other necessary elements of his instrumentation, the sensor is every bit as impressive as the finely wrought instruments of the earlier expeditions — and it brought Barton closer than any of his predecessors to the south magnetic pole. Despite its importance and sheer physical presence as an object, it was unsympathetically placed in the back corner of the exhibition, rather than being displayed more prominently, with the viewer able to move around it. I would similarly argue that other important and visually engaging scientific instruments, like the earlier dip circles (compasses in a vertical plane that point downwards to indicate the pole), should also have been more felicitously displayed, rather than placed in unevenly lit display cases, allowing only one viewpoint and alongside other objects of arguably lesser significance, as if all were equally important to the story (I need only mention the inclusion of Douglas Mawson's calling cards and case, as an example of an unnecessarily-included object). Invisible to the naked eye, yet as real as any other physical force, magnetic poles can only be apprehended with scientific instruments. These instruments mediate our experience with the momentous force of the earth's magnetic field. They deserve greater prominence. 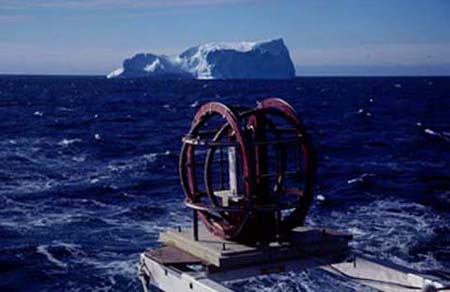 Apart from the objects and interpretive panels, there are only a few interactive elements (mostly for children), one audio feature (a reading of Frank Hurley's diary from the 1912 journey to the pole), and a small theatre that presents three-dimensional stereoscopic images (those flimsy 3-D glasses never seem to fit properly over my own glasses).

Another significant aspect of this exhibition is the period of time it covers. Antarctic history rarely escapes the 'Heroic Age', the early decades of the twentieth century, defined by Robert Scott and Roald Amundsen's race to the geographic South Pole. This exhibition offers a corrective to this dominant narrative by insisting on a longer historical span, beginning, as described, with early ideas relating to the earth's magnetism in the seventeenth century, and ending in 2000 with Charles Barton's success in apprehending the pole. Notwithstanding the centrality of two Heroic Age expeditions in the quest for the south magnetic pole, this time span rightly emphasises the ongoing nature of scientific research and exploration — the quest is never-ending. 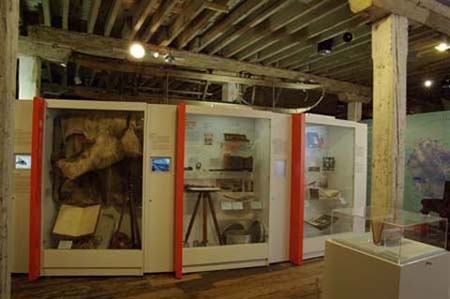 Despite the fact that the earth's magnetic field is a natural phenomenon, there are necessarily political choices to be made when curating an exhibition about it. The central purpose of the exhibition is to celebrate Australia's part in Antarctic history, particularly during the Heroic Age of exploration, and its scientific prowess across the century. To celebrate scientific achievement is hardly objectionable, but when combined with the fraught politics of Antarctic territorial claims and Australian nationalism, one might conclude that the message of this exhibition is far from benign. A recent article by Klaus Dodds and Alan Hemmings, two prominent Antarctic scholars, suggests that current Australian nationalist discourse on the Antarctic, with its renewed and assertive focus on Australian territorial sovereignty, may, 'if left unchecked have the potential to weaken' the Antarctic Treaty System, 'a globally significant regional governance regime' designed to encourage freedom of scientific research and peaceful use of the continent. While Australia's stance is not equivalent to Argentina's often bellicose public discourse about Antarctica, nor is it without significance. Dodds and Hemmings call for us to be alert to the colonial and imperial aspects of Australia's relationship with the Antarctic and sensitive to a discourse of Australian manifest destiny there, and this should include, inter alia, problematising acts of exploration and science.[2] Celebrating historic achievements has a real, if subtle, resonance in the present.

Another example of a curatorial choice fraught with political complexity is the large map at the beginning of the exhibition. This immediately and effectively indicates the routes of major expeditions and the historic course of the south magnetic pole. It has an essential part in this exhibition. It also indicates the borders of national territories and claims (seven nations, including Australia, claim territory in the Antarctic; the claims of Britain, Argentina and Chile overlap). The map recognises the British Antarctic Territory (originally claimed in 1908 under the name Falkland Islands Dependencies), but refers only to Argentine and Chileans 'claims'. This choice is consistent with Australian government policy; but is it necessary for this exhibition? These borders, an integral aspect of Antarctica's human history, are inconsequential for the south magnetic pole, which moves without respect for them. Without an explanation they may confuse; with an explanation they would be a distracting tangent within the exhibition. 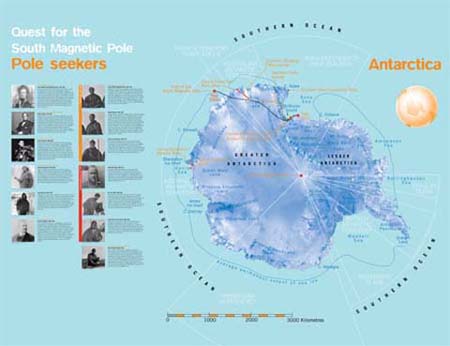 In pointing out the political implications of aspects of this exhibition, I want to insist, as so many others have done, that exhibitions are not neutral spaces (not even for scientific and natural history), and that the curator faces the unenviable task of charting a sensitive yet challenging way through the politics of any situation. Yes, Australia's connection with the Antarctic, especially its scientific connection, is long-standing, real and ongoing; but it exists in the complex tangle of geopolitics. Does this exhibition's focus on Australian achievement challenge the visitor to see the Antarctic as something more than a blank slate for the inscription of Australian greatness?

Quest for the South Magnetic Pole is a small and tightly focused exhibition, and immediately illuminating. I trust it has encouraged the public to expand its Antarctic imagination beyond the Heroic Age.

Alessandro Antonello is a doctoral candidate at the School of History, Research School of Social Sciences at the Australian National University, and is researching the diplomatic, environmental and scientific history of the Antarctic after 1945.