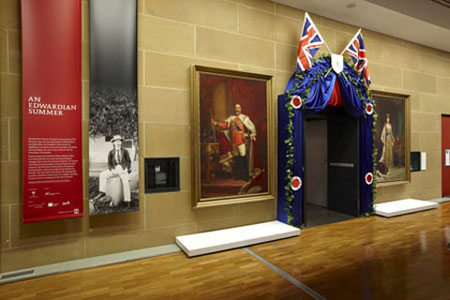 An Edwardian Summer is a celebration of the photography of Arthur Wigram Allen, a prosperous Sydney lawyer and enthusiastic amateur photographer whose lens, we are told, was turned upon 'everything he saw', and whose photos of family and friends, domestic scenes and pageants, shipwrecks and celebrities, picnics and leisurely days on the beach provide a striking visual record of an era. The exhibition gives us just a taste of the extraordinary riches of Allen's photographic albums, which are held at the Mitchell Library, Sydney and contain upward of 10,000 images.

It's a gourmet taste. Digitally reproduced, enlarged and displayed to great effect, the photographs take on a powerful new quality. The albums themselves, also on display at the exhibition but inevitably secured in glass cases, have a charm of their own. One yearns to hold them and turn the pages softly, browsing through the family snaps and enjoying Allen's cryptic, quirky captions. But in the exhibition context, the eye is swiftly drawn from the small and crowded images to the arresting reproductions that adorn the walls, or to those shown in themed digital displays available to browse at will, at the press of a button. These lovingly executed enlargements unite the artistic eye of an Edwardian gentleman with the technologies of the twenty-first century, to stunning and tasteful effect. We can see clearly Allen's boundless enthusiasm for the image, his precise eye for detail, his talent for composition, his masterly use of light and shade. We can sense his own benign human presence behind the camera and appreciate the artistry in every image.

Captured here are moments of leisure and moments of celebration, moods of relaxation, pleasure, contemplation and — sometimes — of glumpish resignation. The images are a combination of design and happy accident, for the camera records both with impartial accuracy. The carefully restrained grumpiness occasionally evident in the faces of Allen's much-photographed children may tell us something of the dynamics of family life and relationships, just as the surrounding objects tell us of the toys and pastimes of privileged Sydney children at the dawn of the last century. (Beside one photograph of his thinly-clad daughter surrounded by birthday presents in the garden, Allen notes that the bitingly cold wind brought the session to an end sooner than he wished — a note of regret that leaves a world of family negotiation only to be guessed at.) The freedoms and constraints of childhood in this era are brilliantly evoked, and one of the principal charms of the exhibition. 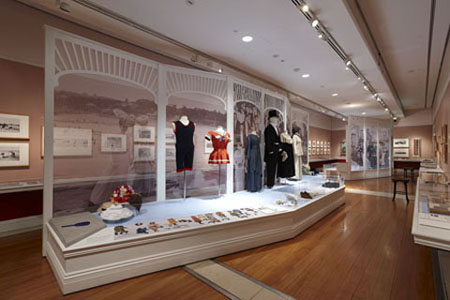 Allen's photography spanned several decades but the exhibition concentrates on the Edwardian years. Royal portraits of Edward and his queen, Alexandria, flank the doorway, signalling the monarchical moment. The first display of photographs shows us the pageantry of Federation, the public expressions of delight at Queen Victoria's jubilee and grief at her death soon afterwards. The final display, with its marching troops and box kite aeroplanes, marks the dawn of the 'modern era' and the loom of devastating war. The intervening segments are more thematic in structure, organised around scenes of family, childhood, beach and bush, rural excursions and the harbour. We are encouraged to see a society in transition, and modernity's transformative effects can everywhere be glimpsed.

The exhibition's title, An Edwardian Summer, reflects the holiday feeling of many of the images on display. But it also seems to play to a familiar, almost clichéd sense of nostalgia for a lost era of elegance, that 'long last summer' before the Great War ripped away innocence. The photographs themselves complicate that sense of modernity's sudden impact, showing instead Allen's early interest in new technologies, and the survival of leisured elegance beyond the war years. Other features of the exhibition, however, tend to play up the sense of a quaintly forgotten era, a moment of suspended time. The costume displays that greet the visitor on arrival set a mood of pleasurable nostalgia, while the magnetic 'paper dolls' and the fancy hats available for trying on, with hand mirrors supplied so one can assess the effect, serve to place the romantic charm of the Edwardian age safely in the hands of younger visitors. There's a pleasurable indulgence here in the fantasy trappings of the past. 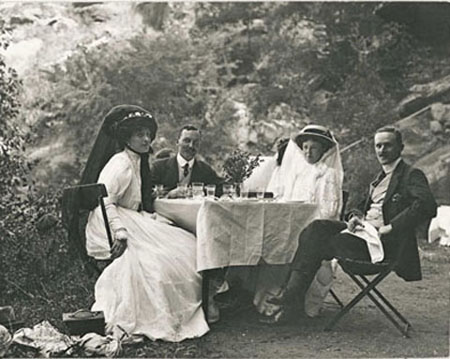 An Edwardian Summer is a beautiful and in many ways a revealing exhibition. It is accessible and engaging, and the examples of visual and material culture that are presented alongside the photographs serve to place them more firmly into social context. The photographs themselves are exquisite. Yet as I moved through the exhibition, I was conscious of a stultifying sense of sameness. There is something relentless about the enclosing, exclusive vision of the middle class. Apart from the sometimes bored expressions of Allen's children, very few unintended details find their way into these photos. There are some distant, anonymous crowd shots, but for the most part the human subjects stand front and centre, confident of their status, dressed with propriety and elegance, at once in command of and at odds with their surrounding landscape. Notably, they seem to occupy that landscape alone, authoritative in their exclusive possession of public and private spaces. Only rarely, it seems, did Allen photograph strangers, and then they were strangers who shared his cultural spaces and leisure pursuits. These are not images of the spectrum of flawed and desperate humanity; but only of Allen's own connected and familial world.

I left the Museum with two books under my arm. One was the book of the exhibition, An Edwardian Summer, a beautiful work with essays by Judith Ainge, Howard Tanner and Alan Davies that offer useful background on Allen himself, his era and his photography. The other was Peter Doyle's City of Shadows, produced to accompany the Historic Houses Trust exhibition of that name at Sydney's Justice & Police Museum a few years ago. The images in this book, drawn from a period that overlaps with Allen's Edwardian summer, provide a powerful and disturbing counterpoint to his vision of Sydney. The clinical, all-encompassing gaze of the forensic photographers captured the residue of violent crimes, committed in a chillingly different city. City of Shadows reminds us that the camera is not neutral. Arthur Wigram Allen photographed only what he chose to see. The safe, leisured elegant world that he inhabited, and in which we delight to play, was only ever accessible to a few.

Penny Russell is an associate professor in history at the University of Sydney, with a particular interest in manners, scandals and Australian history. She is the author of Savage or Civilised? Manners in Colonial Australia (New South, 2010). 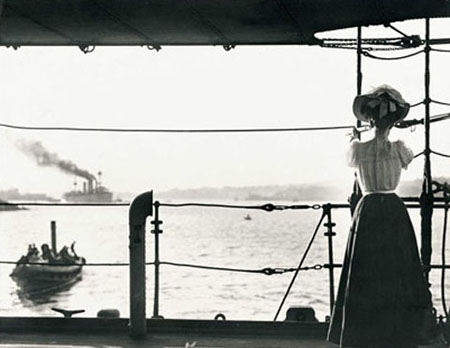