Eat your history: A shared table

The French gastronome Jean Anthelme Brillat-Savarin famously wrote that the destiny of a nation depends on the food they eat. Does this mean modern Australia is the result of an early colonial predilection for British food? Or of dishes like Slippery Bob, a delicacy of kangaroo brains fried in emu fat? The Museum of Sydney's Eat your History: A Shared Table attempts to answer some of these questions. 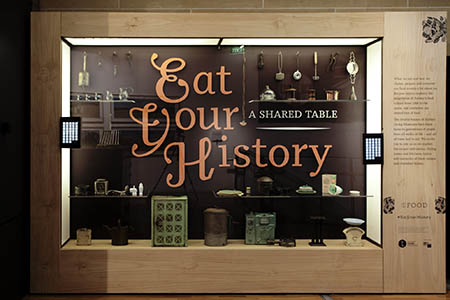 Title wall for Eat your History, on show at the Museum of Sydney
photograph Â© Jamie North

The exhibition has to contend with the intrinsic difficulty of capturing the ephemeral quality of food. In the absence of the tastes of a bygone era, the curators have found a need to reproduce the material conditions in which this food was produced. The exhibition gathers materials from the museum's own collection, as well as from eight of Sydney Living Museum's historic houses. The kitchens and dining rooms from diverse locales such as Vaucluse House, Susannah Place in the Rocks and Rose Seidler House are reproduced with accuracy and detail. These cover both the temporal and social variety of food experiences in Sydney. 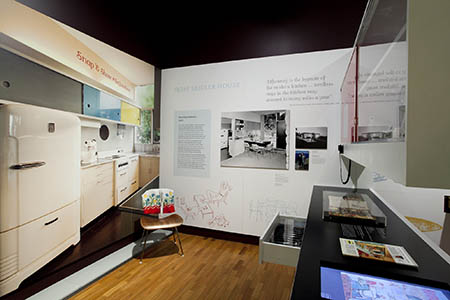 Outside the exhibition, the visitor is greeted with large glass display cabinet containing a range of the curious and strange utensils that could be found in many Australian kitchens in days gone by. Curiosity as to the purpose of these utensils is sated by a pair of electronic tablets mounted on the wall, which provide a brief description of the utensils' purposes. More tablets are positioned throughout the exhibition and enhance the visitor's experience. These provide audio and video footage as well as written text relevant to each section of the exhibition. 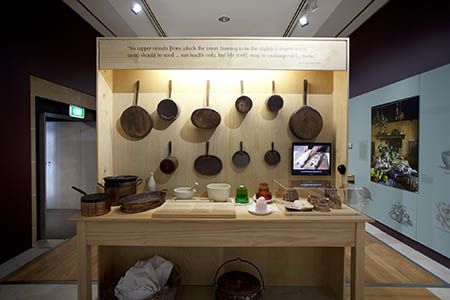 Once inside, the exhibition takes the visitor through a potted history of Sydney's gastronomic past. It begins with the colony's first official banquet, held in 1788 in honour of the King's birthday, and culminates with the ultra-modernist kitchen of Rose Seidler, designed by her architect son Harry. In between, the visitor can view, among other things, the breakfast table at Elizabeth Farm, the sumptuous banquet table at Vaucluse House and the more humble shared kitchen at Susannah Place. 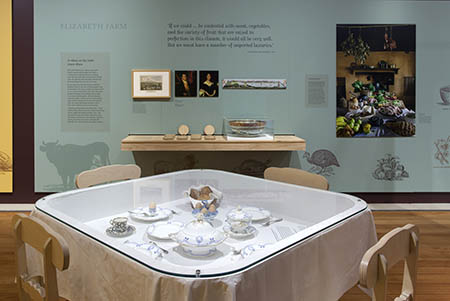 Unable to engage with the visitors' tastebuds, the curators have found clever ways to engage with their other senses. The governor's table is reproduced on a large horizontal video screen that shows a celebratory dinner in progress. Loud 'huzzas', which can be heard throughout the exhibition, punctuate the proceedings. Close by, small canisters contain some of the ingredients that could be found in colonial kitchens and allow visitors to experience their scents. Jaquie Newling, Sydney Living Museum's colonial gastronomer, features in a short video demonstrating the elaborate preparation of gelatine from the pages of Mrs Beeton's famous cookbook, a familiar presence in many colonial homes. Newling informs the viewer that they should first go to the butcher and buy a couple of calves' feet, before proceeding with her instructions that also include lowering the gelatine into a well in order to allow it to properly set. For many of us today, accustomed as we are to the simplicity of using a packet of gelatine, this was a practical demonstration of the difficulties and constraints many found in colonial kitchens. 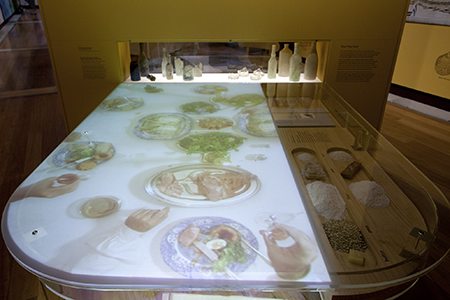 Visitors can browse through some of the cookbooks that found their way into the kitchen at Rouse Hill House, including a copy of Edward Abbott's The English and Australian Cookery Book, which marks its 150th anniversary of publication this year. The large number of Australian cookbooks in this collection is an indication of both the growth of a local cookbook publishing industry and a recognition that locally written books were more suitable for the colonies.

The accompanying text to the various exhibits in Eat your History is engaging and informative, providing the visitor with a clear and detailed description of the material on display. Younger patrons, however, might find the large amount of text on display a little difficult to take in.

The exhibition is being held in conjunction with a wide range of food-related events hosted across the city in the various venues of Sydney's Living Museums. At Vaucluse House, for example, cooking classes were held to demonstrate the essential culinary skills required in the 1850s. Hyde Park Barracks hosted in its forecourt a dinner for 100 guests featuring colonial delicacies such as kangaroo steamer and Eccles cakes. Accompanying the exhibition is a blog entitled The Cook and the Curator: Eat your History, which was shortlisted in the Multimedia History Prize section for the 2013 New South Wales Premier's History Awards.

Overall, Eat your History: A Shared Table provides visitors with a fascinating view into the foodways of Sydney's past. The collection of exhibits on display captures the growth of Sydney from a colonial outpost to a thriving modern city.

Blake Singley is a PhD candidate at the Australian National University.