It is amazing how much can be fitted into a very restricted space in a museum display without losing clarity of message or creating visual clutter, especially when it is done with forethought and taste. By necessity confined within a relatively small area, the ningenneh tunapry exhibition (the name means 'to give knowledge and understanding'), focusing on the lives and history of the Tasmanian Aboriginals, is packed with objects and texts yet does not impose a sense of compression that would detract from the messages presented. 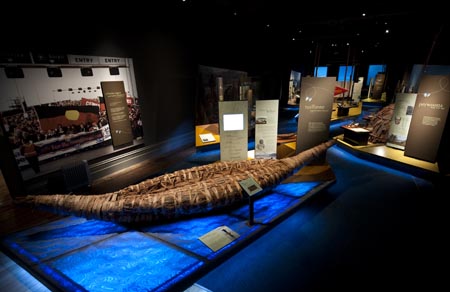 The entrance into the approximately 5-by-13-metre gallery space is dominated by a large, beautifully made replica of a toilline — a three-part, stringy-bark raft or canoe — one of several watercraft unique to Tasmania. The visitor is drawn into the traditional past with a replica stringy-bark hut of the more permanent form used on the blustery west coast of Tasmania. The hut is, in turn, overhung by a display of long slender spears. A small display of stone artefacts draws attention to the ancient exchange routes along which prized types of stone and other goods once moved across the island. A timeline stretching back to the earliest dated sites provides continuity of present and past (although this has recently been superseded by the discovery of the 40,000-year-old living floor on the Jordan River levee at the site of the controversial location of the Brighton bypass).

By positioning the walkway around an elongated island, the designers have ensured that the viewer is never far away from the present. One direction, along the wall, embraces the past; the other, the island, confronts the visitor with the questions of identity, politics and the public engagement of Tasmanian Aborigines in the late nineteenth and twentieth centuries. Particularly noteworthy is a simple statement celebrating the contribution made by Islanders to the battles of Empire. Supported by a plaque and photograph commemorating Marcus Blake Norman Brown of Flinders Island (died 1917), we are reminded that Indigenous Australians have fought and died as Anzacs. Other sections of the island are dedicated to issues relating to lost generations, reconciliation, and the ever-growing role Indigenous Tasmanians play in protecting their heritage. 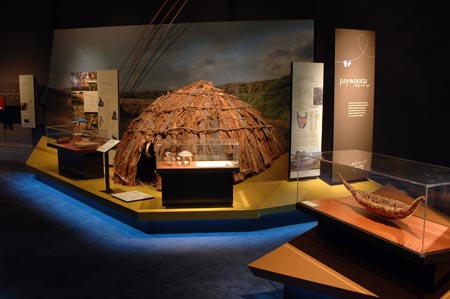 The far end of the exhibition space celebrates the contemporary practitioners of ancient Tasmanian crafts: shell stringers, and workers of kelp and fibre. Contemporary dance is also celebrated. Behind the display cases of beautifully crafted necklaces, baskets and water carriers, we are treated to a continual run of images of the craftspeople who link the present with the past.

Moving back along the wall a display focusing on mutton-birding, once an important source of fat and protein and now a commercial enterprise, includes an interactive that tests the visitor's mettle: you are invited to place a hand in two artificial mutton-bird nesting burrows and encouraged to determine which burrow holds the chick, and which one harbours a deadly tiger snake. Apparently, it is all a matter of knowing the relative temperature of the occupied burrow — but I would leave it to the experts myself. The seasonality of the mutton-bird is brought home with a clever graphic that delineates the times of arrival and departure of birds of different ages as they fly annually across the world from one sub-polar region to the other.

With an unfortunate discontinuity we move from the mutton-birding present to the colonial past, the dislocation of the people from their ancestral lands and the ordeals they endured of settlements and resettlements. Sparsely informed by a flintlock pistol, Governor Arthur's proclamation board of 1828; a scattering of stone and glass tools, bone buttons, clay pipes and marbles — the colonial admixture — and wallaby mandibles that reflect the continued use of traditional foods, this section understates the situation of the times. While there may well be an attempt to avoid a 'black armband' approach to history in this section of the display, there are many uncontested instances of the appalling treatment that Tasmanian Aborigines received at the hands of the settlers. Perhaps there is also a need to evoke the resistance they demonstrated.

A discontinuity within a discontinuity also exists here. Sandwiched between the proclamation board and the artefacts from Wybalena is William Lanney's pipe, a long-stemmed pipe with brass bowl, oriental in style. The last Aboriginal man of full Indigenous descent, Lanney survived the settlements only to die of cholera contracted during a whaling voyage.

These discontinuities are the only major flaws apparent in this small but brilliantly packed gallery. Technical issues — a number of the touch-and-feel interactives were broken — perhaps reflect more on the general lack of respect for objects found among some museum visitors. The confined space also is not conducive to visiting school groups and consequently dramatically reduces the educational opportunity that the gallery could provide. 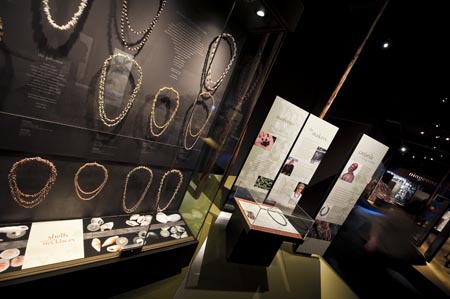 These points aside, it must be remembered that the gallery was always intended to be temporary as plans were developed for an overall refurbishment of the existing TMAG spaces, and the construction of new buildings and expansion of the museum as a whole. Taking these factors into account, ningenneh tunapry is a small, well-formed jewel, capable of standing beside similarly focused exhibitions found in many of the museums of the mainland states and territories.

A final message, one of reconciliation and hope, an appeal for recognition closes the tour of the main gallery. Almost as an aside, occupying one small space offset from the main gallery are images of individual Tasmanian Aborigines, from the earliest days of colonisation through to the twenty-first century. Voiceovers let us hear something of the Tasmanian languages that once dominated the island. No matter that the phrases are fragmentary, the message is clear: 'We have a past here — we have a future'.

Kim Akerman has been curator in three Museums and maintains a long-term involvement in a wide range of themes associated with the anthropology of Aboriginal Australians.