Imagine that you were asked to curate an exhibition on Australia in 2013. You have only one large room in which to represent a year in the life of the nation. The exhibition will remain entombed, a time capsule until 2113, when it will finally be opened for visitors. The challenges are considerable. What objects and images would you choose? How would you represent the myriad layers of daily life across Australia â individuals and families, suburbs, cities, rural towns and villages, Indigenous communities and migrants, asylum seekers and tourists, politicians and prisoners? Given only 10 panels of text barely more than 300 words each, what would you say? Whatever your decisions, when the doors were opened on your exhibition 100 years later, the likelihood is that in 2113, future Australians would find 2013 just as strange, distant and unrecognisable as we find 1913 today.

Trawling the detritus of the past, all museum curators face familiar dilemmas. What objects and images are available? How representative are they? What stories do they tell? And how to assemble their select cargo of flotsam and jetsam into a coherent narrative? The choices are infinite, but, as every curator knows, the past cannot speak unless we choose to give it life.

Entering the cavernous, dimly lit hall that houses the National Museumâs exhibition Glorious Days: Australia 1913 it is impossible not to be struck by the curious power objects and images have to evoke the past. We see the rollerskates worn by Elsie White from Armidale, a pair of pink satin tango shoes, a slouch hat, a shipâs bell, a British Army toy soldier set, Victor Trumperâs cricket bat (used in his testimonial test match in 1913) and âMarion Sutherlandâs bicycleâ. Given that most of the lived experience of Australians in 1913 is irretrievably lost and that no one that year was actually given the task of curating an exhibition for the future, it seems miraculous that the curators have managed to retrieve so many remnants of Australian life from exactly one century ago. 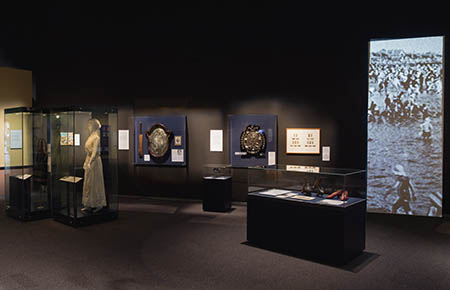 One of the most evocative exhibits is the film of the St Kilda esplanade on Boxing Day, circa 1913. Here we see Australians at play. Men in cloth caps and boaters; women in hats of all kinds, strolling arm-in-arm, their parasols shielding them from the blaze of the summer heat; families swimming and picnicking; and almost everyone buying and selling. These few minutes of footage capture the innocence and optimism of the period (âwhen hopes ran highâ), a quality also reflected in a nearby life-size photo of troops on a shipâs deck about to leave for war one year later, their faces simple, knockabout and open, as if the promise of war had somehow brought their community closer together. Or perhaps this is an illusion? For as always, it is impossible to see the past without our knowledge of subsequent events and the present day colouring our perspective. How can we understand 1913 without seeing that year as the eve of the Great War (1914â18), something Australians of 1913 could never themselves have foreseen? 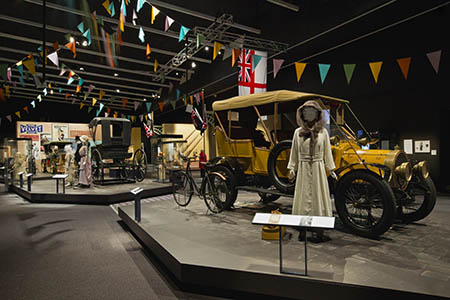 A streetscape sweeps down the centre of the exhibition, and is populated by pedestrians, bicycles, horsedrawn buggies and cars, including the Delaunay-Belleville touring car in the foreground of this image
photograph by Jason McCarthy, National Museum of Australia

The design of Glorious Days is structured around the striking visual centrepiece of a Delaunay-Belleville touring car and the horsedrawn buggy that it was quickly supplanting. Flags fly overhead, with most of the surrounding exhibits hugging the perimeter of the space. Unlike one of the National Museum’s recent exhibitions, Not Just Ned: A True History of the Irish in Australia, the exhibition is thankfully uncluttered. Visitors are given the necessary space to appreciate the objects, photographs and films on display. Text is minimal; basic information is given but the viewer is free to reach his or her own understanding of each exhibit. Perhaps one of the hardest tasks for the curators was to find a way to represent Indigenous Australia in 1913. Positioned at the very rear of the exhibition are a series of striking bark paintings from Arnhem Land, many depicting spirit beings, collected by Baldwin Spencer, hanging directly opposite Herbert Basedow’s imposing collection of Tiwi spears.

At the rear of the exhibition hangs a series of striking bark paintings from Arnhem Land, many depicting spirit beings, collected by Baldwin Spencer
photograph by Jason McCarthy, National Museum of Australia

Breaking the exhibition into various themes such as Australians at work, sport and leisure, defence and security, arts and crafts, education and government, etc., the abiding theme conveyed is that of ‘nation building’. The Australia of 1913 is portrayed as economically prosperous, democratically and socially progressive, defiantly white and slightly anxious regarding its security and place in the world. Australians are seen to be proud of their nascent nation, as the jittery, white-specked footage of Canberra’s naming ceremony reveals.

More accustomed to reviewing books than exhibitions, and arriving with a historian’s perspective (how, I wondered, could any exhibition on Australia in 1913 possibly match the detailed examination of that year by a number of leading Australian historians in the impressive book of essays that accompanies Glorious Days?), I learned much from many of the objects on display. The exhibition reminded me yet again of the unique qualities of original objects and images. Gazing on objects from any historical period, we meet the material and tangible past. It’s possible to imagine their touch and smell, the feel of them in our hands or the sensation of them brushing up against our bodies, just as it might have felt for those who once used them. At the same time, they also remind us of our separateness â as they remain trapped in their past, so we remain trapped in our present. The challenge for every museum curator is the task of translation, of building bridges and opening windows between the past and the present. So many of the items on display in Glorious Days â evening dresses, furniture, naval uniforms, dolls, prams and school honour boards â conjure the past. Yet with the aid of modern technology, the exhibition also allows the visitor to see and hear the past as well. 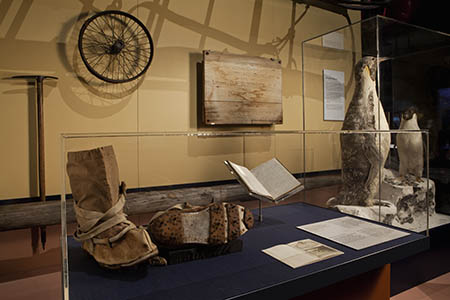 A display of objects relating to the Australasian Antarctic Expedition of 1911â14, including spiked snow boots and penguin specimens
photograph by Jason McCarthy, National Museum of Australia

Tucked away in an alcove, is a touch screen musical display where it is possible to listen to the voice of Dame Nellie Melba and the bass-baritone Peter Dawson singing âSong of Australiaâ. To hear the faraway strangeness of their voices is to hear the past for what it truly is: a foreign country. Close by, on the opposite wall, hangs an arresting (and atypical) Hans Heysen domestic interior, Sewing 1913. A woman (most probably Heysenâs wife) sits sewing before an open window, as dappled, incandescent light streams through from the garden outside. Like many of the black and white photographs in the exhibition (photography was just beginning to emerge as a mass medium in 1913), Heysenâs work appears more familiar to our visual age.

I spent several hours moving through Glorious Days, buffeted by waves of curiosity, recognition and nostalgia. The exhibition is a credit to all the curators and historians who worked on it. For a brief moment, it was possible to glimpse what it might have been like to live in Australia in 1913.

Mark McKenna is an Australian Research Council fellow based in history at the University of Sydney, whose book, An Eye For Eternity: The Life of Manning Clark (2011) won the 2012 Prime Ministerâs Prize for Non-Fiction.