Afghanistan occupies an ambivalent position in the contemporary perception of the so-called Western world. The landlocked country in the heart of Asia is mostly perceived as existing on the fringe or outside of modern civilisation, ranking low on democracy, health, education and other indicators of prosperity. In the mass media, the former pariah state constantly assumes centre stage due to its key role in the ‘war on terror’ and drug trafficking. Denying the enormous tragedy and horror currently experienced in this country would amount to a perverse distortion. But most media organisations, fuelled by hunger for sensational news, perpetuate the mayhem by drawing a partial picture without a glimmer of hope. A more promising tactic might be to critically excavate the forgotten richness of its culture and history, as is done in the exhibition Afghanistan: Hidden Treasures from the National Museum, Kabul at Melbourne Museum. 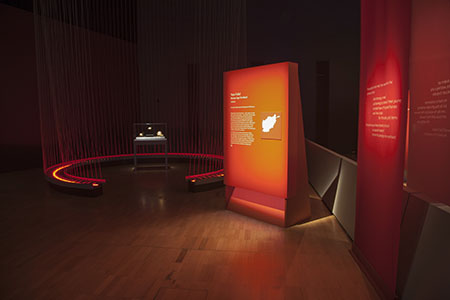 Entering the exhibition space, visitors watch an introductory film and then encounter a map and timeline that locate Afghanistan in geographical and historical terms. The map pulls the country from the fringe of modern civilisation to the centre of historical world affairs. Afghanistan has occupied a crucial strategic position in Central Asia since ancient times because of its unique geographical location as a nexus between East and West. The routes of the ancient Silk Road crossed Afghan landscapes and cities, linking the civilisations of Greece and Rome with those of China and India. These geographical crossroads have been characterised across millennia by exchange and conflict. Instead of subjecting East and West to a seemingly insurmountable binary opposition, as done by most of the mass media, the exhibition alludes to mutual entanglements through cosmopolitan histories, thus helping to reframe understandings. Along the Afghan corridor, there has always been a two-way traffic towards the East, as during the expansion of the Greek empire under Alexander the Great, as well as towards the West, as during the reign of the Mongolian emperor Genghis Khan. 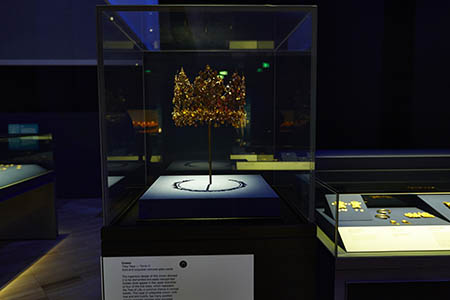 Side view of a display case featuring a collapsible nomadic crown made of gold and turquoise coloured glass paste, found in Tomb VI at Tillya Tepe
photograph by Jon Augier
Â© Museum Victoria 2013

The main exhibition space is divided into four sections, each representing one of the 1500 or so archaeological sites in Afghanistan. Artefacts are drawn from these four key sites (Tepe Fullol, Ai Khanum, Tillya Tepe and Begram) and span 2200 years â the period between 2000 BCE and 200 CE. As the visitor meanders through the exhibition, the entanglement of East and West through intersecting geographies and histories becomes embodied and tangible through cultural practices and artistic expressions. Each practice and expression draws on a multiplicity of overlapping and mutually constitutive styles that make it apparent, in the words of sociologist JN Pieterse, that ‘cultures have been hybrid all along, hybridization is in effect a tautology’. I visited the exhibition with a friend and we marvelled at the gold treasures uncovered by the Russian archaeologist Victor Sarianidi in ancient graves of nomadic Turkic and Mongol descendants. These nomads had lived between 100 BCE and 100 CE and carried their material wealth, such as miniscule items of jewellery and other adornments, along their migratory travels. The gold artefacts have a timeless artistic quality. That is not to say that we adopted the gaze assuming a so-called primitivist material expression sanitised of history, but rather experienced a simultaneously ancient and modern aesthetic that has travelled through different historical epochs and survived countless seasons of fashion and taste. 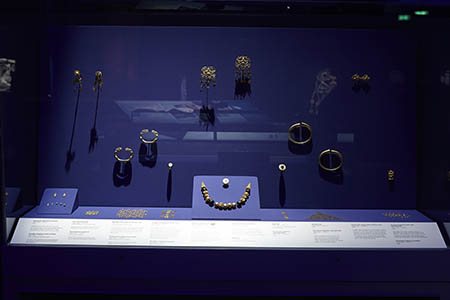 After having been introduced to the ‘hidden treasures’ and their historical contexts of production and archaeological contexts of rediscovery, visitors are brought into touch with humanising stories and faces of contemporary Afghanistan. The concluding hallway shows a variety of photographs depicting Afghan life as it is lived beyond conflict and violence. The exhibition tells the extraordinary story of a group of courageous curators who hid treasures belonging to the National Museum, Kabul, before war broke out anew and saved these artefacts from certain destruction. Right next to the exit of the exhibition is a current photograph of the National Museum, which reopened in 2004 and attracted more than 200,000 mainly Afghan visitors in 2011. It shows the heavily damaged building with a banner hanging over the main entrance: ‘A nation stays alive when its culture stays alive’.

In a different situation, this might well be regarded as a trite statement. Here, however, it is a most powerful expression of the mutual dependence of culture and survival. It succinctly emphasises that Afghanistan’s future will never be secured in purely military, economic or political terms. Rather, it urgently requires the revitalisation of culture and rediscovery of heritage so that, as one of the exhibition panels says, ‘Afghanistan may again be defined by the cosmopolitan spirit that long characterised this creative melting pot and hub of the Silk Road trade’. Museums and travelling exhibitions have a key role to play, allowing treasures to re-emerge from hiding and enriching life once again.

Philipp Schorch received his doctorate in Museum and Heritage Studies from Victoria University of Wellington, and is currently a research fellow at the Alfred Deakin Research Institute and the Cultural Heritage Centre for Asia and the Pacific at Deakin University.