At the National Portrait Gallery: Art or history? Working machines and 'broken Britain': The Victorian Bushfires Collection Exhibition as edition: Edition as exhibition 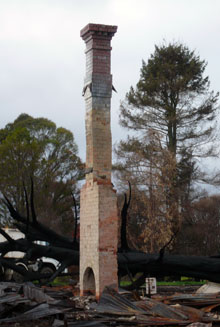 Rescue collecting was the first priority. The collection began in the days following Black Saturday with donations from people who had lost their homes to the fires: a melted coin collection, household objects transformed by the fire (slumped glass, bent golf clubs, melted alloy wheels, the twisted remains of a child's bike). The other priority areas were tourist brochures representing the areas of Kinglake and Marysville before the fires and the most recent Country Fire Authority educational materials. One of the more challenging items to be rescued was a 7-metre-high chimney from a property in Kinglake. This has been re-erected at Melbourne Museum (part of Museum Victoria) to commemorate Black Saturday and to create a place to reflect on the historic and ongoing presence of bushfires across the Victorian landscape.

Following Museum Victoria's initial rescue collecting, further development of the collection has been strongly influenced by evolving community needs and partnerships. The Healesville Primary School has worked closely with Museum Victoria to exhibit over 40 works of art by students from grades 2 to 6. These artworks offer visitors a very powerful and personal insight into the experience of living with the daily realities of bushfire. Most of the children knew people who had lost property, homes or friends to the fires, some had lost their own home, and everyone had been through the trauma of evacuation multiple times. The inclusion of these works in the collection captures the experience of children, their families and the broader Healesville community, and demonstrates the role of art in the process of making meaning and contributing to community healing. 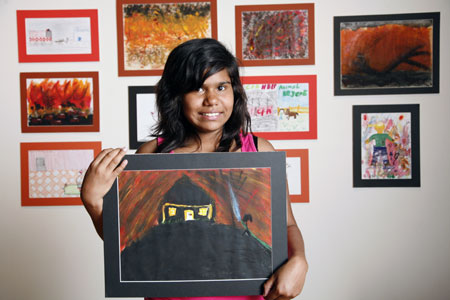 An interesting outcome of the emerging community response has been the collection of a range of native animal specimens (koala, possums and birds) and the opportunities this presents for cross-disciplinary collection and interpretation. The collection, preparation and display of 'Sam the Koala' has enabled Museum Victoria to investigate the impact of climate change and bushfires on native wildlife and their habitats, and to explore the role of volunteers in wildlife rescue. The collection and documentation of specimens and artefacts relating to Victoria's endangered faunal emblem, the Leadbeater's possum, also provide opportunities for research and public programs that examine the impact of people on native habitats, and the meaning and role of faunal emblems.
Community and organisational partners have been another essential tool in the collecting methodology. The collection is being developed in close association with existing community partners and organisations, including: Country Fire Authority, Red Cross, Bushfire Recovery section of the Department Planning and Community Development, Wildlife Rescue and Protection, Southern Ash Wildlife Shelter, Alfred Hospital Burns Unit, Department of Sustainability and Environment, and local historical societies.

Museum Victoria is collaborating with the National Museum of Australia to develop mutually reinforcing collections. One of the National Museum's major themes is people's relationship with the Australian environment. Bushfire is a key element in the Old New Land gallery, portrayed in the 'Firetracks' display, which was initially developed for the Museum's opening in 2001. The National Museum continues to build on the fire theme, having recently acquired a truck from a New South Wales volunteer brigade, complete with all firefighting equipment. Just as rolls of honour have to be extended to accommodate the names of those who die in recent wars, 'Firetracks' was adapted during 2009 to make reference to the Black Saturday fires and the lives lost. Although Museum Victoria leads the Black Saturday collecting program, the National Museum will acquire some of the material collected by Museum Victoria, and will continue to collect some of its own. Part of one of these latter collections was displayed in the National Museum's hall to commemorate Black Saturday's first anniversary in February 2010. The National Museum plans to redevelop the Old New Land gallery over the next few years and it is likely that bushfire will be a major theme. This refurbishment will offer the potential for ongoing display of Black Saturday material.[1] 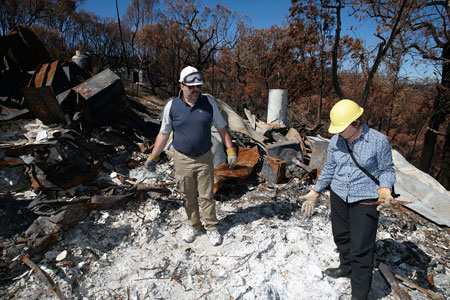 Museum Victoria's Victorian Bushfires Collection is already being used in exhibitions, public programs, research and community engagement. These applications reveal a range of ways in which museums can contribute to community healing in the aftermath of natural disasters: 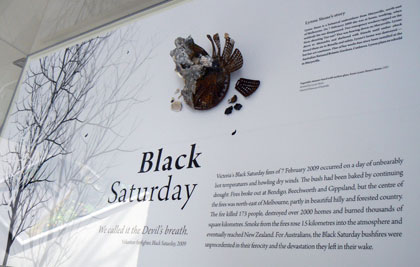 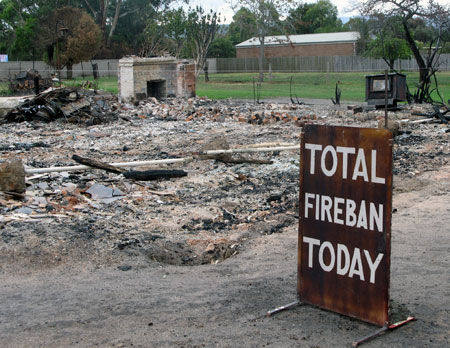 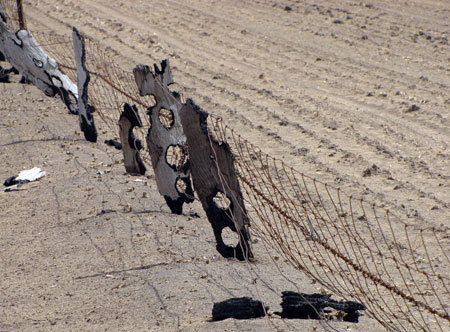 Bushfire has been a characteristic of the Australian continent for millions of years. It has been a feature of human experience of this land for 60,000 years. Museum collections and exhibitions play a significant role in representing bushfire to Australians and others. The Victorian Bushfires Collection offers deep insights into one of the most traumatic elements of our relationship to our environment. As concerns about global warming increase and the threat of catastrophic bushfire rises, the collection is destined to play an important part in the national consciousness.

1The National Museum of Australia is also contributing to the Steels Creek Bushfire Project, which involves a group of scholars and a film-maker investigating related aspects of the experience of Steels Creek, a small community in the Yarra Valley badly affected by the fire of 7 February 2009. Tom Griffiths (of the Australian National University's Centre for Environmental History) is working with researchers Christine Hansen and Emily O'Gorman to coordinate a community history of Steels Creek. Mora Fahy is producing a film examining the experiences of three families in the aftermath of the fire. Peter Stanley, head of the Museum's Centre for Historical Research, is writing a book, Black Saturday at Steels Creek, largely based on the testimony of members of the community.
Related links
> Liza Dale_Hallett> Matthew Higgins
« back :: next »