Visitors to India soon realise how important toilets can be â sometimes, very, very important. But consider the plight of India. Some 800 million of its 1.2 billion people have no access to sanitation. (Not no access to water closets, mind: not even to the most basic squat-pit earth closet, or to the running water the West takes for granted.) This problem afflicts women especially. While men have no qualms in unzipping by the roadside virtually anywhere â my personal record is observing nine men urinating at one time â women feel constrained from urinating in the open, and will endure agonies before finding safe and acceptable places, often waiting until after dark.

In this, as in so many other things, India resembles nowhere so much as 19th-century Britain. In the formality and deference of its social relations, the proximity of rich and poor, the ubiquity of religion, the presence of large families, the prevalence of spitting, the selling of goods in penny packets, visible prudery underscored by pervasive sexuality, chaotic traffic (some animal-drawn), child labour, elderly manual labourers, domestic servants, beggars, crowded streets and unregulated housing â and the scarcity of public toilets â introduced in Britain in the 1850s.[1] Anyone wanting to gain insights into what the Britain of the 1850s was like might look at India today.

The absence of public toilets, and especially in how it affects women and girls, is only one of India's challenges. Enter the Sulabh International Social Service Organisation, and its Sulabh Foundation. Established in 1970 by an admirer of Mahatma Gandhi, Dr Bindeshwar Pathak, the Sulabh Foundation's mission is to provide public toilet facilities throughout India. It builds and maintains hundreds of public toilets in major cities, including at tourist attractions (so toilets outside the Red Fort in Delhi and at Agra Fort and the Taj Mahal are provided by Sulabh) but also in towns and villages across the vast and diverse nation. As India's largest non-profit organisation (it has 50,000 volunteers), it has constructed more than 13 million domestic toilets. Over 15 million Indians now use a Sulabh toilet daily.

At its office in the shabby New Delhi suburb of Mahavir Enclave, the foundation has created a sort of display village of toilets, a dozen of which have been devised to suit the needs of various communities, from extended families to entire villages, and India's varying soil and hydraulic conditions. An important motivation of the Sulabh Foundation has been a Gandhian determination to eliminate 'sweepers' and scavengers â that is, low caste workers, often of 'Untouchables', who formerly removed human waste by hand and so were reviled and persecuted. (Though formerly illegal, the reality has proved harder to outlaw, but Sulabh's crusade has resulted in 640 towns becoming scavenger-free.) The quiet and orderly Sulabh compound, with its whitewashed walls, swept paths and 'improving' homilies displayed around its walls ('Sanitation is our religion': yet another Victorian throwback), is an oasis in the squalor and chaos of the crowded apartment blocks overlooking it. And it includes a large room devoted to a seemingly tongue-in-cheek but actually profound examination of the place of the toilet in human history; a free museum. 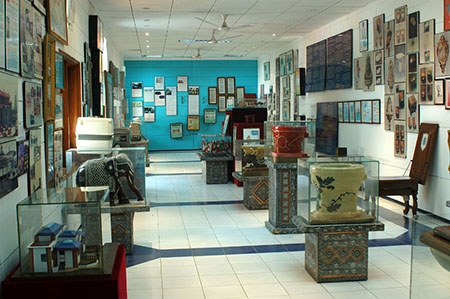 Interior of the museum, showing some of the international toilets on display
Sulabh International Museum of Toilets, New Delhi

Sulabh's museum is essentially a series of images, drawings, graphics and photographs, supported by a modest display of toilets, commodes and models of sanitary ware. Most of the foundation's resources rightly go towards its practical work in communities. It recognises both the ubiquity and timelessness of the bodily need for urination and defecation, but also the great diversity of ways in which human societies have responded to and coped with those needs. 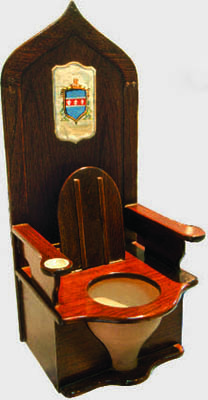 Images of drains and sanitary works in the Harappan archaeological sites of the Indus valley civilisation show that over 4000 years ago India's most ancient identifiable culture had seemingly devised ways to dispose of human waste. Photographs of toilet arrangements in Indian sites such as Amber Fort (Jaipur) or Fatehpur Sikri show how the West had no monopoly on cleanliness in the 16th century. By contrast, the wall of copious quotations from medieval and early modern Europe, shows that its people had a striking tolerance for and a willingness to speak frankly of the business of (quoting Rabelais, Boccaccio and Chaucer) pissing, shitting and farting. Sulabh's is an avowedly 'international' museum, one which clearly takes a cross-cultural approach over a great span of time (though oddly its text is entirely in English; not in Hindi nor any other of India's 22 official languages).

Its artefacts primarily relate to the great period of sanitary progress â again, essentially the 19th century â in which the elements of the modern water closet were tested and arguably perfected. They include elaborately decorated toilet bowls and chamber pots, suggesting the pride in the creation of efficient sanitary ware that Sulabh shares and embodies. They include, too, examples of Sulabh's innovations and achievements â such as a portable, tented, dry-soil system devised to provide toilets in times of natural disaster, or a model of a Sulabh facility in Shirdi (near Ahmednagar, in Maharashtra). It boasts 148 water closets, 108 bathing cubicles, 5000 lockers and can accommodate 30,000 users per day, with three biogas plants powered by them. The display, though haphazard and artless, reflects the foundation's commitment to its mission and, in the end, appears positive, noble and optimistic, despite the magnitude of the challenge it faces. 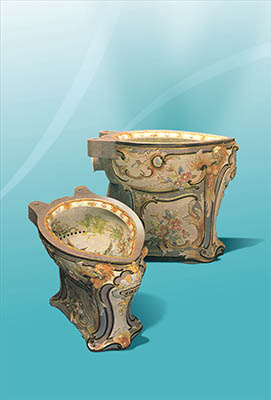 As previous contributions to reCollections have demonstrated, there is a growing interest in the role of museums in advancing progressive causes â another manifestation, in a sense, of the survival of Victorian values, in that museums' 19th-century public roots lay in a desire to educate and improve the urban working class.[2] Museums now advocate causes such as social inclusion, combatting racism and advancing the rights of women, the disabled and the victims of children's homes; reflecting the social preoccupations of the early 21st-century West. India's and Sulabh's concerns are rather more physical and didactic, and broader than merely the provision of sanitary facilities. It points out that not only do 600 million Indians still defecate in the open; that one in ten of the world's dead children die â avoidably â from diarrhoea; and that India's schools often have no places for menstruating girls to change towels, pads or rags. (As a result, their education is often impeded or even stopped, so acute is their embarrassment at having to share toilets with boys.)

Inspirational slogans on the wall of the Sulabh International Museum of Toilets, New Delhi
photograph by Stephen Foster

The Sulabh Foundation's mission is noble, its task vast, its ambition and optimism boundless. Its museum, though perhaps seen by Western visitors as being ironic, is, in fact, in earnest. The social reformers of Victorian Britain, whose ideals of education and self-improvement did so much to instigate, advance and achieve reforms in the quality of life in Britain (and not least the establishment of public toilets) would recognise in its little museum a familiar and valuable approach to the material contribution that museums can make to human progress and happiness.

Sulabh can be reached at www.sulabhinternational.org. Its free museum, at Sulabh Bhavan, Palam Dabri Marg, Mahavir Enclave, Palm, New Delhi, is open 10 am to 5 pm, seven days a week.

1FML Thompson, in The Rise of Respectable Society: A Social History of Victorian Britain 1830â1900 (Fontana Press, London, 1988), not only observes that the idea of the public toilet was invented (or rather, given that it had existed before, re-invented) for the Great Exhibition of 1851 (significantly the largest improving 'museum' of the century), but also points out that public houses, which provided toilets before they became the responsibility of local government, often offered museum-like collections as one of their attractions.

The Grainger Museum, reCollections, vol. 6, no. 2