These are migrant streets

Visiting the Museum of Immigration and Diversity in London

A line of huddled figures is slowly moving along the damp brick wall of a side street in East London. People are shivering in the cold March drizzle, staring at those further ahead, who pass around a worn-out laminated information sheet. One by one, they are finally let in through a door of peeling and faded paint; yet the damp stays with them. Only the grey of bad weather is replaced by the gloom of bad lighting on the inside. 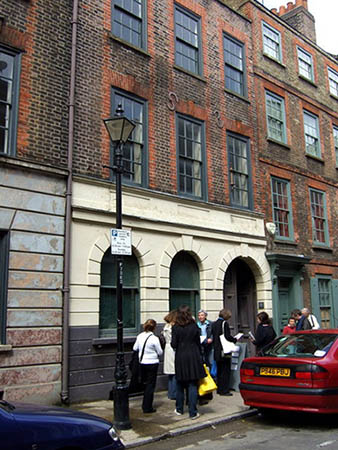 Visitors waiting for admission to 19 Princelet Street, only rarely open for viewing
Â©ceridwen

Entering 19 Princelet Street, home to the Museum of Immigration and Diversity, I take in the atmosphere of the hallway: cracked walls and a worm-eaten sideboard. Everything seems to suggest that all colours will fade to sepia in an instant and a hostile immigration officer in an old-fashioned uniform will be waiting in the next room to note my name on a list, harshly ordering medical examinations. Instead, a friendly volunteer hands the visitors a pen to sign the guest book and points out that the exhibition starts on the lower ground floor and continues upstairs.

The feeling of displacement in time continues in the exhibition space, as I step on the broken stone floor of a high room and lift my gaze past a first-floor gallery to a set of aged and dirty skylights. Some of the dark, wood-panelled walls carry faded Hebrew writing, and a pile of old-fashioned leather suitcases sits in the middle of the room. Simple information sheets pasted directly onto the walls inform me that the building housed a refugee Huguenot family in the 18th century and the Jewish Friendly Society for Polish immigrants in the 19th century. In one of the open suitcases I find rotting potatoes with phrases like ‘Potato No Good’ and ‘Trouble All Around’ written on them in marker pen; others contain postcards and letters written from imagined, faraway lands. These are the primary exhibits in the museum: products of children’s art workshops on the themes of migration and exile, their answers to the basic and all-important question of why people relocate â including one which acknowledges the potato famine that once drove thousands of famished peasants away from their homes in Ireland.

All the while, any expectation of detailed historical information is repeatedly disappointed. The few printed sheets along the walls outline different waves of immigrants, mostly in order to hammer home the political point that all the residents of Britain are immigrants or descendants of immigrants and that diversity is good for society. And yet I am attracted. It must be the force of the building itself that makes me warm to this alternative concept of a museum. Just like the children who imagined displacement and international travel when cutting out photo collages, my imagination takes the smell of mildew and the rich textures of aging surfaces and pieces together a feeling of what it must have been like to be a recent arrival from Ireland in the 1850s â or from France in the 16th century.

In fact, Huguenot and Irish migrants and any number of other waves of migration become interchangeable, as the heavily symbolic imagery inside 19 Princelet Street amounts to an attempt to conjure up the archetypical universal migrant experience in East London. The Huguenots, as well as later Eastern European Jews, fled persecution and often came with little more than their willingness to work hard. Many people from both groups engaged themselves in aspects of the textile business â be it weaving, home-based sewing or trading garments. The children who contributed the museum’s artworks come from a local school that now teaches a majority of Bangladeshi students. This community, in turn, has its roots in the most recent larger wave of immigration and some of its members, again, run textile shops on nearby Brick Lane. Around the corner from the Museum of Immigration and Diversity, Brick Lane Jamme Masjid (Brick Lane Great Mosque) stands on the corner of Fournier Street. This building encapsulates the East London immigration narrative: erected as the Huguenot L’Eglise Neuve in 1743, it became a Methodist Chapel in 1819, was converted into Spitalfields Great Synagogue in 1898, was acquired by the Bangladeshi community in 1976 and became the London Jamme Masjid, before receiving its current name. 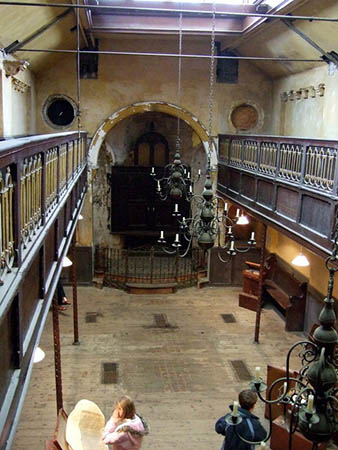 The main area of what was once the old synagogue, viewed from the gallery, with some of the exhibits in the Suitcases and Sanctuary exhibition
Â©ceridwen

Learning all of this made me fall in love with the part of East London around the museum and the mosque when I lived and worked there last year. In the borderland of Spitalfields, Whitechapel and Bethnal Green, the very streets and facades seemed to breathe an age-old scent not of wealth and global conquest, as one might experience it in the wealthy west of London, but of struggle, sweat and stubborn ambition. On the canvas of bricks, undercoated in hues of brown, the watercolours of historical signs of Huguenot textile businesses faded while cheap Bangladeshi curry joints announced themselves in shrill tones. I loved in my lunch break to stroll up Brick Lane and buy a bagel from the Jewish bakery, whose simple neon sign proudly announced the year of establishment, 1855. All of this formed the everyday taste of an unpretentious and incidental delicacy mixed together from imported ingredients in the blender of urban history.

After visiting 19 Princelet Street, my personal glorification of the area starts to crumble. To experience the simplified narrative of immigration and romanticised poverty head-on prompts me to question and deconstruct the homely feeling I had developed whenever gazing at any old brick house. Many of the exhibits, especially the poems and letters written by children, show quite clearly what must have been the adult input in their production. The message can be read all around, in tourist brochures or educational signs beside Old Spitalfields Market. Its essence is: this area has a history of immigration; the immigrants came from different faraway places and were poor, yet they did not lose hope.

Strangely, the commonplace bits of historical information that I picked up in passing when going to work in Commercial Street had produced an instant fondness of the place almost in refusal to learn more detailed or precise facts. As the museum brings together and confirms most of what I have heard, read or gleaned before and soaks it in a highly enriched concentrate of atmospheric elixir (flavour: Immigrant East End), I come to realise that talking about âwaves of immigrationâ, in this or that century, actually does not say much about anything. My fascination with times past also gets harshly grounded when reading in Emanuel Litvinoffâs 1972 memoir, Journey through a Small Planet, the bitter account of dire Jewish livelihoods in the 1920s East End.

On further reflection, the contradictory effect that the museum has on me is really due to its lack of funding. The absence of actual historical exhibits and the fragmentary information provided presumably stems from insufficient capital to curate a conventional exhibition or maintain a collection. With this in mind, it is actually astonishing what the makers of Suitcases and Sanctuary, the installation that I saw, have accomplished with so little means. Even the atmospheric aspects that I described are related to the lack of funds: the wait outside the door was caused by the infrequent public opening times (though group bookings are available on demand) and the damp and run-down state of the building is crying out for renovation or conservation.

I want to conclude by emphasising that, while the museum is struggling to provide detailed and differentiated information, the political stance it takes is a vital one in Britainâs current public climate. While no state support seems to be available for any central public learning institution on the topic of migration in multicultural London, on the very streets of some eastern boroughs, pedestrians can see the governmentâs approach to immigration policy at play: a recently launched campaign of mobile billboards aimed at facilitating the âvoluntary returnâ of those immigrants labelled âillegalâ. The slogan âGo home or face arrestâ is a slap in the face of all those Londoners not born in Britain or born into immigrant families. Seeking opportunity and contributing hugely to economic and cultural life in the metropolis, they arguably constitute the majority of London residents. As populist national-level politics turn hostile against the people of the capital, initiatives such as the Museum of Immigration and Diversity are extremely important.

A previous version of this article appeared in a blog post for The Migrationist, http://themigrationist.net/2013/07/25/these-are-migrant-streets-visiting-the-museum-of-immigration-and-diversity-in-london.