Gallipoli: The scale of our war

You approach the exhibition entrance. âGallipoli â the Scale of our Warâ (in huge red letters) shouts at you. There is an image of a soldier, pistol at the ready, arm raised aggressively. Things do not improve as you enter the exhibition to be met by a huge (2.4 times lifesize) image of a Kiwi soldier in shooting mode. On the dark screen behind appear words âGet a man for every bulletâ, ââ¦ felt a glow of prideâ. Martial music fills the ears. Your worst fears are realised. Hollywood has turned the human tragedy of Gallipoli into heroic melodrama.

What lies behind such fears is that, in the 2000s, Wellington has become an off-shore factory of the Hollywood film industry. The leading protagonists have been Peter Jackson, with his series of Tolkien epics, and Richard Taylor, whose Weta Workshops supply effects for many Hollywood films, including Jacksonâs. Like others in this part of the world, both men were bitten by the ANZAC centenary bug and both turned their talents to developing museum exhibitions to mark the occasion. Gallipoli: The Scale of our War is Taylorâs effort at the Museum of New Zealand Te Papa Tongarewa. 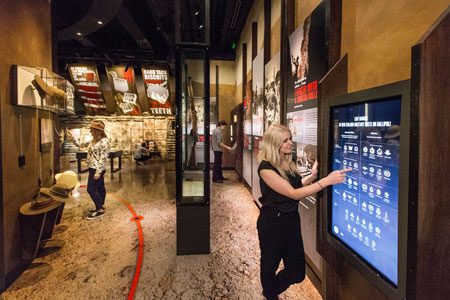 But things arenât quite what they seem. It turns out this first figure of Spencer Westmacott represents the attitudes of a man who arrived at Anzac Cove on the day of the landing with his head full of the heroic expectations of war. The five other large models which provide the spine of the exhibition present very different takes on Gallipoli. One is a doctor, Percival Fenwick. In front of him is a dead body and, on the wall, his quotations are distinctly sober in comparison: âNew Zealand is losing good men for some reason or otherâ. He is horrified there are 400 men with wounds to be dressed: âa dreadful timeâ. The music now is like a dirge. We move on, to sweaty Private Jack Dunn, eating hard biscuits covered in flies. We learn that after returning, still sick, from hospital, Dunn fell asleep at his post and was sentenced to death by firing squad. The sentence was lifted, but only long enough that death came from a Turkish bullet not an Anzac one. Next comes a MÄori machine-gunner, Rikihana Carkeek, grim and terrified in action in the August offensive; and then a nurse, Lotte Le Gallais, who had volunteered to be close to her brother. She is portrayed just having learnt â four months after the event â of his death ashore. The sixth figure is the brilliant writer and classical professor Cecil Malthus, looking dejectedly contemplative in a Western Front crater of poppies â reminding us that Gallipoli was but the beginning of four years of torment. So the figures, presented in extraordinarily graphic detail, provide an emotionally satisfying journey. In the rooms beyond the figures, the experiences of these individuals are explored in detail. Each has a touchscreen interactive that tells their life history before, during and after the war. And issues raised by their experiences are amplified. After Percival Fenwickâs biography comes a horrifying interactive which displays in graphic form the effect on the human body of bullets, shrapnel, shells and grenades. 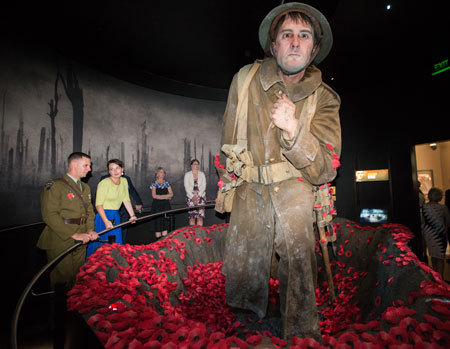 The six figures are linked by a chronology on the floor with red crosses representing the numbers of Kiwis who lost their lives on that day â in a subtle touch, a horseshoe marks 12 May, the day when the Mounteds (Mounted Riflemen) landed. There are some powerful set pieces â a 3-D viewing of the armistice when the two sides buried their dead, an invitation to sit in Colonel Maloneâs dug-out and read the wonderfully moving letter he penned to his wife the night before the August attacks. The unforgettable tones of Henare Wepiha Te Wainohuâs sermon in MÄori just before those attacks echo through a reconstructed trench. There are plenty of drawers to pull out, and buttons to push â and sound excerpts from oral histories collected in the 1980s are powerfully enriched with large photos. 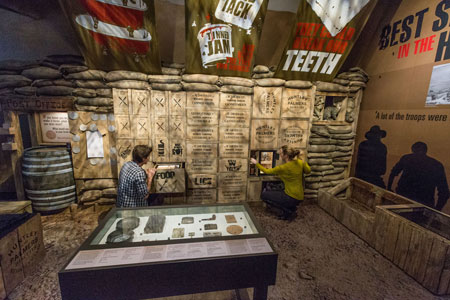 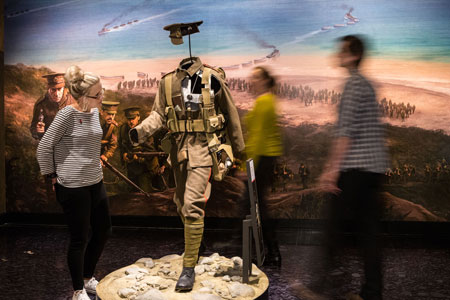 Not everything works. At times the sound bleeds distractingly, and several paintings, one of the landing and another of the August attack, are uncomfortably romanticised. Yet the 400,000 people (in seven months!) who have queued to go through the exhibit will have learnt much about the nationâs most harrowing experience. 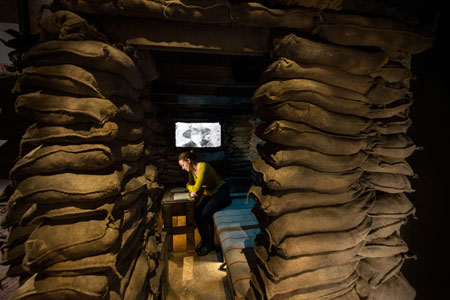 A visitor in the replica of Maloneâs dugout
photograph by Norm Heke, Te Papa

Competing with this blockbuster, Peter Jackson had his work cut out. The fact that 100,000 have visited over the same time provides one measure of success. Yet his exhibition, The Great War, which occupies the site of the old national museum directly behind Pukeahu, the renovated National Memorial Park, has some refreshing points of difference from The Scale of our War. The major techniques this time are not giant figures but evocative film sets â we begin with a street in Belgium on the eve of war â and colourised photos. Jackson has taken black-and-white images from the archives and coloured them with astonishing veracity. Suddenly the war becomes real. In addition, on first impression, Jackson has chosen to present the war from an international perspective, whereas in The Scale of our War the perspective is purely New Zealand. The opening scenes include excellent posters that explain the international origins of the war. The rich collections of artefacts, including a London bus used as an ambulance and a French reconnaissance biplane, include German and Turkish objects. Yet the presentation is less even-handed than it seems. There are newspaper headlines shouting ‘Germans deliberately trample laws of civilised warfare under foot’; and the chronological structure is marked by large Commonwealth War Graves Commission headstones that give the year and a phrase that presents the war very much from the allied perspective: ‘1917 â muddy progress’. There are some nice touches, such as labels of words, still in use, that originated in the war â ‘bangers’, ‘bonk’, etc. There is one excellent diorama showing a woodland scene being transformed into a battlefield swamp. But surprisingly there are almost no interactives and no films â especially in comparison with the Te Papa exhibit, which includes the only surviving Gallipoli film alongside other screen experiences. Too often, things are left unexplained. We get details about Rasputin, but not the Russian Revolution; we learn of the United States’ conflict with Mexico, but its entry into the war is not properly treated. By the time we reach 1918, the exhibit seems to have run out of puff. 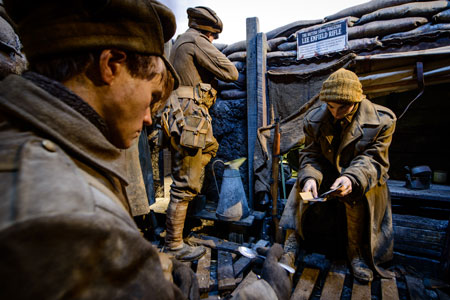 But wait, there is more. Around the corner Jackson offers Gallipoli: The New Zealand Story in Colour. This tells the same story and invites comparison with Taylor’s effort. Again, there are fine elements: the walls of colourised images give realism to the sights and horrors of Anzac in a way black and white could never do. The images of the armistice of 24 May are especially powerful â and include an amazing photo of two nude Aussies carrying on a stretcher a blindfolded Turkish officer on his way to negotiate the armistice. It is also fitting that the names of the New Zealand dead are listed by rank and unit for each day.

But there are problems. The huge diorama of Chunuk Bair, with thousands of model soldiers, is difficult to follow, in striking contrast with the excellent display at Te Papa, where, in a much smaller space and using shifting lights, the sequence of battle is superbly illustrated. When I visited Gallipoli, there were too many labels where the bulbs had blown and images were covered up. Further, while the contemporary quotations make a good supplement to the images, they become increasingly long-winded. By the end of the exhibition, huge wads of descriptive text and quotation, often placed on a high wall where they are almost illegible, become indigestible. The dreaded phrase ‘a book on a wall’ springs to mind! 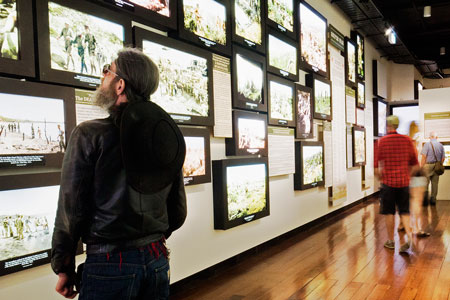 Finally, one must note that both exhibitions end by giving prominence to the controversial claim that New Zealand had a higher proportion of casualties than any other country at Gallipoli. At Te Papa we are told that 93 per cent of the New Zealanders who landed were killed or wounded but, of the Australians, only 58 per cent. At Jacksonâs exhibit the claim is prefaced by mention of âmedia controversyâ. In fact it was historians, not journalists, who questioned the figures as being based on faulty assumptions when they appeared at Te Papa. The claim, which threatens to erect a new Gallipoli mythology, should be removed from both exhibitions until solid research is done into its accuracy. 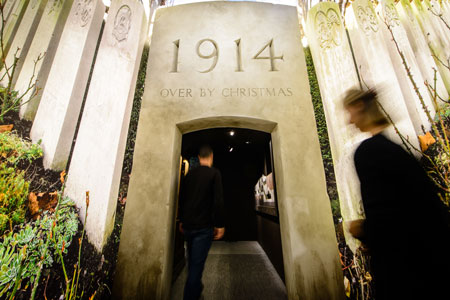 Despite such qualms, it is well worth paying a visit to Wellington to see these rather different exhibitions. If you are interested in the First World War, both will amplify your understanding; and even if you have barely endured the past yearâs martial brouhaha, both provide valuable examples of exhibition design. Richard Taylorâs huge models and Peter Jacksonâs colourised images are alone worth close contemplation. I, for one, am grateful that these Hollywood moguls sacrificed the pull of the almighty dollar to give back to their community their particular take on an important moment in our history.

Jock Phillips is a New Zealand historian who was the general editor of Te Ara: The Encyclopedia of New Zealand.