At a meeting of Victorian museums staff at the State Library of Victoria in 2013, each institution was asked to outline the way it would remember the First World War. The resulting list was wide-ranging and diverse but, even so, I wondered whether each institution would be able to keep away from the territory of others. It would pay, I thought, to be quick out of the blocks. Curator Deborah Tout-Smith was indeed very quick with Love & Sorrow. She had no need to worry about any competition in Victoria or elsewhere. Love & Sorrow is in a class of its own. 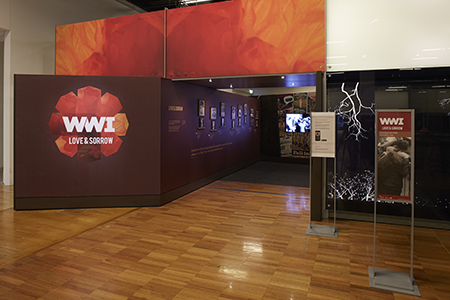 Working at the Australian War Memorial many years ago I became aware that the Memorial, from its inception, had deliberately, and perhaps properly, avoided much engagement with the emotions of the museum visitor. Many war museums and interpretation centres, even in recent times, have gone down exactly the same path. Love & Sorrow entirely rejects this approach. This is an exhibition that openly and deliberately works on the emotions of its visitors to proclaim its strong and powerful message: war is an unmitigated and abhorrent disaster and we need always to be conscious of its enduring impacts across subsequent generations. This exhibition is anything but a celebration of the centenary of the First World War.

One of the intriguing things about Love & Sorrow is that the emotion arises, largely, from the interactives and video presentations, more than from traditional museum objects and original letters. There is a reasonable reliance on the letters and other writings of soldiers and families to and from the front. But these letters are accessed through interactives, allowing long reading or a mere glimpse at the material as the visitor chooses. The wise visitor will want to spend plenty of time with this material. Love & Sorrow is an exhibition that does not force the visitor along a set path of materials and a pre-ordained and slowly developing story. The visitor should select one or more of the eight characters to follow at the beginning, and then make sure to look for all the manifestations of that character throughout the various sections. A little more guidance, perhaps, would have ensured easier access to every manifestation of âyourâ characterâs story. I was worried that I might miss something crucial about the man I had chosen, which, of course, made me concentrate hard on every aspect of the exhibition. To be fair, I could not make the smart phone application work so perhaps the guidance I received was less than what was available.

The Melbourne Museum promised a small exhibition, organised chronologically, with five major sections. It would run, we were told at the 2013 meeting, for two years. After opening, so strong was the public reaction that it was quickly decided that the exhibition would continue until August 2018. Love & Sorrow deserves its undoubted and obvious early success. Put simply, it is the most exquisite, moving, and intense exhibition on aspects of the First World War that I have seen anywhere in the world. I expected to spend about an hour in the exhibition. I spent two hours on my first visit and returned for a second tour of more than two hours. There are some few seats inside the exhibition and the visitor does need to sit down from time to time. Did I say it was intense? The exhibition, I suspect, is deliberately claustrophobic, enclosed and somewhat frightening, to heighten the engagement of the emotions.

There is a teaser even as you approach the exhibition. An ancient hospital bed stands on a small platform showcase perhaps 50 metres from the entrance. The bed has wheels and a handle for steering so the patient can be moved around as easily as possible. The confronting caption asks, âCould you spend forty-three years in this bed?â The visitor reads that Albert Ward did precisely that: at the Anzac Hostel in Brighton, in this very bed. There is a screen to the side showing original film of men like Albert Ward, all patients at the Anzac Hostel, entering a free concert at the Elsternwick theatre sometime in the 1920s. Jerky and jumpy the film may be, but it is apparent from its evidence that there were men even worse off than Albert Ward. The display forces the visitor to confront the appalling consequences of mass warfare even before entering the exhibition. From the start, Love & Sorrow is saying that the war was not over when the last gun was silenced. The war would drag on for Albert and for so many others for at least 43 years, but the visitor will learn that it goes on much longer than that. 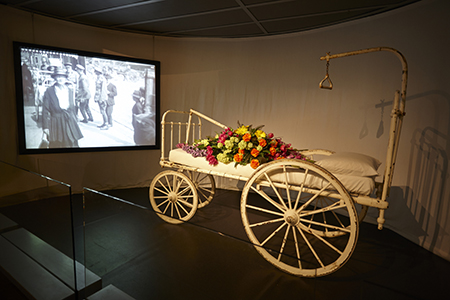 Let me jump to the last major display in Love & Sorrow. A series of video screens have short interviews with a surviving family member of each of the eight characters on whom the exhibition concentrates. The interviews are contemporaneous and were conducted by Deborah Tout-Smith in 2014. Most of the interviewees seem to be in their later years, but they are not really old people. They show the visitor that the effects of the war have been carried through to the present in the love and sorrow each of these relatives manifest for their forebear. The effect of the war was not 43 years, scary as that seemed at the first exhibit. The impact of the war has endured for at least 100 years and is still ongoing, as the videos make clear.

The visitor is invited to follow closely just one of the eight main characters whose stories are told in some detail. I chose Albert Kemp, who, although he had two children, enlisted on 14 October 1916 two weeks before the first conscription referendum. Perhaps he thought the referendum would be carried and it would be better to enlist of his own accord. He was a small man, 32 years of age, a meat carter at the time of enlistment, living at 8 Normandy Avenue in the Melbourne suburb of Caulfield. He was sent overseas within a couple of weeks of enlistment and was lost to his family forever. He embarked for France in March 1917. The exhibition will tell you some of these things but by no means all of them. Some I have found in the National Archives. This is revealing. The curators of Love & Sorrow have rigorously selected information sufficient to tell the story. As the emphasis is more on the emotions than on the details of the story, there is no information overload. 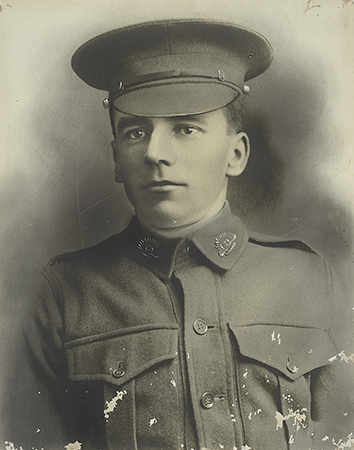 Private Albert Edward Kemp, who served in France and Belgium and was killed in action in 1917
Museum Victoria

The emotions that this exhibition engages are not confined just to love and sorrow. It will provoke anger in some parts and shock in others and many shades of sadness and respect. The shock is at its most intense and most confronting in a small (and perhaps for children better bypassed) section on facial disfigurement. Through photographs, the display of medical equipment and the explanation of medical technologies the visitor is confronted with a much neglected aspect of the awfulness of this terrible war. The photographs are deeply shocking and the outcomes of the attempted reconstructions are hardly satisfactory. I have never seen a display like this in any other museum though most historians of the war would have known something of the story. 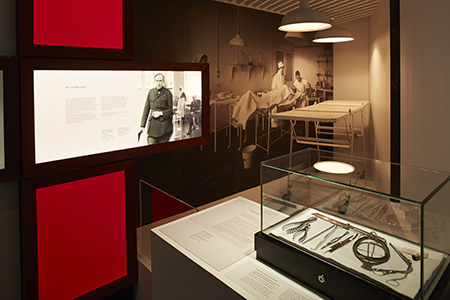 The display on facial reconstruction at the Sidcup Hospital
photograph by Benjamin Healley, Museum Victoria

Albert Kemp is important in two other major parts of the exhibition. There is a wonderful panoramic photograph of Glencorse Wood, in Flanders, as it was in the immediate aftermath of the battle there in 1917 and as it is seen today. The motion of the changing landscape from horror to beauty is powerful and, for the first and only time in Love & Sorrow, we hear the sound of battle gradually replaced by todayâs birdsong. This too is supremely evocative. The visitor learns that Albert Kemp was killed at Glencorse Wood on 21 September 1917. His name is listed on a memorial to the 1771 men killed there on a tablet on a wall opposite the panorama. 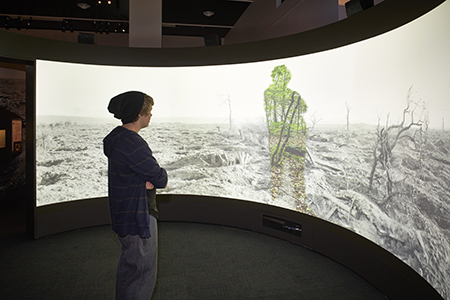 The visitor moves to the next major interactive to discover the story of each household in one Melbourne street, Normanby Avenue, Caulfield. For years historians have been saying that the war touched, in some way, every Australian street in every Australian suburb. This remarkable exhibit proves that powerfully. Some houses were not touched by war in their own family story, but because so many neighboursâ houses did have a soldier at the front or some other intimate connection with the war every single person in Normandy Avenue was therefore caught up in the war. The realisation of this is chilling and this becomes another âsit downâ spot.

Albert left his wife and family in number 8, a simple unpretentious cottage. His wife, Annie, and their two children were evicted from the house after the war, unable to keep up the rent. She moved in with Albertâs parents, never remarried and died in 1961, a war widow for 44 years and hardly noticed by a âgratefulâ nation. Later, in the relativesâ video section the visitor will hear from Annie and Albertâs daughter Ethelâs goddaughter who tells of Annieâs sad life of remembrance and struggle. The effects of the war, this video interview reminds the visitor, travelled at least into the third generation. For what, the visitor wonders, did Albert Kemp die? 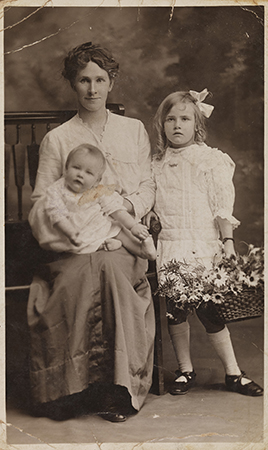 It would be a pity to have missed Annieâs story if you had been following Albert Kemp as your âcharacterâ because the Normandy Avenue interactive doesnât boast too readily of its treasures and a visitor might have to wait a while to use it. There is very little about battle in the exhibition; indeed, Glencorse Wood stands for all the battles of the Western Front. Other institutions have a stronger brief to cover battles and, presumably, much more material to work with. In giving the visitor just a hint of battle, Love & Sorrow gives neat context without moving away from its central messages.

There is much else in Love & Sorrow that I am unable to cover in this review. Australian museum staff and Australian historians should make strenuous efforts to include Love & Sorrow in their itineraries of âmust doâ planning. This small exhibition leads the way in showing a remarkable way of re-imagining the First World War. Victorians should be very proud of it.

Michael McKernan is a Canberra-based historian, working largely in the field of Australian social and military history. His most recent book is Victoria at War 1914â1918 (NewSouth 2014).