As a young girl on a memorable family holiday in 1970 on a western New South Wales pastoral station, I witnessed my 70-year-old suburban grandmother (she lived in the Sydney suburb of Eastwood) jump on one of the stationâs horses and gallop off with a spirited wave of the hand. Close familiarity with the horse recedes with each generation, as land on the outskirts of Australian cities is developed for housing and what were once agistment paddocks give way to urban sprawl. It is timely then for a museum to mount (pardon the pun) an exhibition on this once ubiquitous animal, a kind of âcountry-comes-to-townâ story.

But how challenging is it to mount an exhibition on a subject (a living thing, an animal) that never appears as an object? After all this is a museum, not a zoo. It requires curators and designers to work together to recreate the horse both as a physical presence and a cultural subject and the two stories need to work together. There is another challenge and that is to bring the story of an essentially mundane animal, a workhorse if you like, to life. This exhibition aims to explain âAustraliaâs horse storyâ in a local context. The audience it addresses is explicitly an Australian (not an international) one â why else would an opening text panel state: âHorses have ploughed our fields, mustered our sheep, hauled our goods, and carried us to school and work â¦â

The exhibition entry immerses the visitor in the wildness and romance of the horse. Eighteen flat screen panels project video of a group of thundering brumbies running free, twisting and turning, epitomising and establishing the âspiritedâ element of the title. The irony, of course, is that many horses arenât wild and free but broken-in and tamed. 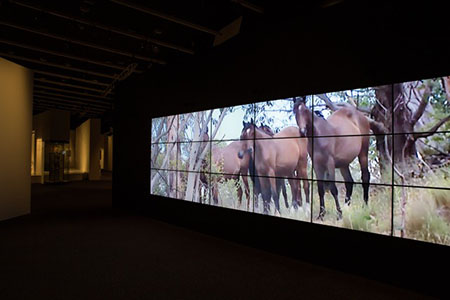 The exhibition opens out around a circular space, inviting the visitor to walk in a slow clockwise fashion, perhaps in the footsteps of a horse being broken in. Along the journey, Australiaâs horse story is revealed in brief clipped text panels and objects with extended captions, all interspersed with creative mannequins of horses and their riders. The mannequins were devised by talented artist and sculptor Harrie Fasher and fabricated by Thylacine. Fasher is no stranger to spirited representations of the horse, having participated in exhibitions The Horse in Art (Mall Galleries, London, 2011) and A Horseâs Tale (National Art School Graduation Exhibition, Sydney, 2009). Fasherâs skill is essential to the presentation of this exhibition. Many of the visitors would be familiar with the exquisite life-sized and dynamic puppets created by South Africaâs Handspring Puppet Company for the National Theatre of Great Britainâs theatrical production of War Horse (which toured Australia in 2013). Although static, the mannequins in Spirited lift the exhibition and give it a similar yet distinctive feel. 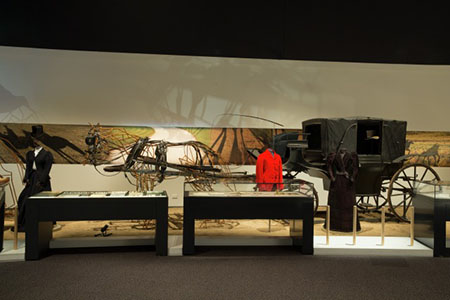 The thematic sections with titles like âIn a new countryâ, âOn the stationâ, âOn the farmâ, âIn the townâ, âOn the trackâ, âThrough the cityâ, âOn the battlefrontâ, âBody and spiritâ, âAfter deathâ and âOn the open rangeâ are disappointingly plodding in their language but object-rich and genuinely interesting. The curatorial team (and there are nine curators in total) has done a fine job developing the exhibition brief, thinking laterally about the cultural aspects of the horse, based on the available objects and involving various horse-based sporting and community groups in the exhibition process. For me, the 70â100-word thematic panels lack punch and vigour (and spirit) and reek of writing-by-committee, a pity and a wasted opportunity when the exhibition title, Spirited, is inspired. A window into limits placed on curators, though, can be gleaned by following one piece of main introductory text through its various iterations: in the exhibition the text begins: âAustralians have lived with, loved and exploited horses â¦â, in the foreword to the accompanying short book this has been hobbled to read: âAustralians have lived with, loved and relied on horses â¦â and by the time it gets to the website it has become: âAustralians have lived with, loved and depended on horses â¦â Small changes can incrementally suck the spirit out of your text.

Melbourne Cups on display in the Spirited exhibition
photograph by Jason McCarthy, National Museum of Australia

Standout objects and stories that took my interest included Andrew Gibsonâs unusual sleek wooden rocking horse, the large rough-hewn horse trough, the delicate and precise Quail saddlery tools, the splendid 1866 Melbourne Cup, the striking war recruitment poster and the quaint Lincoln Park Dairy delivery cart. Together these objects speak to the part played by the horse in the everyday life of the country and the city and they remind the visitor that horses connect the country with the city, a connection that has receded just as some skills and knowledge of animals has diminished. Horses connect people to nature and to Australiaâs agricultural and tamed land. 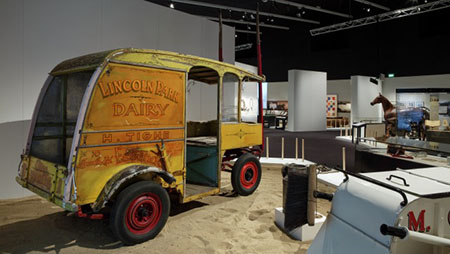 Many of the objects have been drawn from the collection of the Museum itself, rather than borrowed, but that said, the National Museum needs to be careful with its object selection and stories as too many owe their provenance to a 200-kilometre radius around Canberra (Goulburn, Cooma, Bermagui). It would have been interesting to analyse the differences in horse use in other colonies and states, especially when telling âthe nationâs horse storyâ, but curators use what they have available, and the fault lies perhaps more in past collecting policies and budgets rather than with the selection of particular exhibition objects. That said, a few large objects, especially the multiple horsedrawn agricultural implements, felt a bit like âfiller materialâ. Nevertheless, one absence which pleased me was the lack of emphasis on the well-worn stories of Cobb & Co., done elsewhere at the Stockmanâs Hall of Fame in Longreach and the Cobb+Co Museum in Toowoomba. And I was pleased that poor Phar Lapâs heart hadnât been dragged along for the ride, though his absence may disappoint some visitors. Not much use has been made of the Indigenous collections, represented here among over 500 total objects only by a breastplate, carved boomerang and a bush toy.

A nice touch is the prominence given to graphic excerpts from George Hamiltonâs 1864 series of sketches, âTreatment of the horse in Australiaâ, highlighting animal welfare. But these are comfortably in the nineteenth century and little discussion is encouraged of the contemporary treatment of the horse in Australia, despite a passing reference to pet food, or as victims in Victoriaâs jumps racing or indeed at the Melbourne Cup.

While the text may not be spirited, the design and especially the graphic design of this exhibition is visually stunning. With endless images of the horse to choose from, the graphic designer has selected a suite of horse shadows, most notably the long shadows of outback Australia. They create an atmosphere of light and shadow and movement. The palate of black panels against stark white walls and narrow graphic panels in shades of browns and yellow and reds is clever and evocative. The black cases and objects sit on the sandy loam of the outback and sections are corralled by wooden dowel pegs. Sounds are triggered above the exhibition cases. 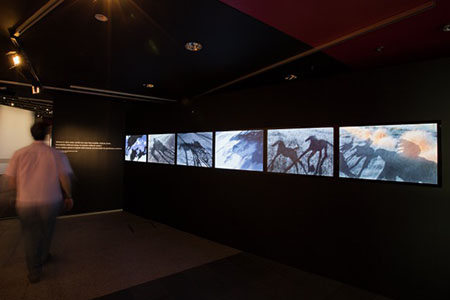 Recreating physical contact with horses, creatures that are especially large with distinctive sounds and smells, is achieved through several tactile stations: visitors can touch horse bits and comb horsetails, they can smell what horses might eat â lucerne, oats, grass, chaff and bran. Simulated horse âsconesâ, once a common sight on city streets, no doubt play to the school audience, one of the main target audiences, especially with the country-comes-to-the-city feel. 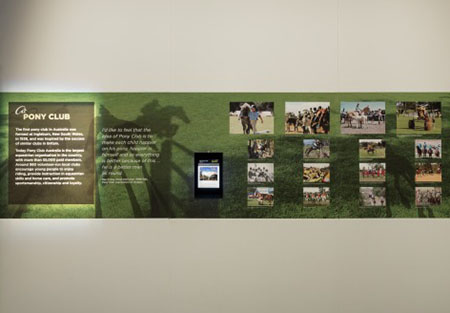 A couple of niggles that left this visitor disappointed included the gendered language in some of the quotations. With so many literary and historical quotations about the horse in Australia to choose from, it was disappointing to select ones that just mentioned âmanâ or âheâ and âhimâ. This wouldnât have been so cloying if the general feeling of the exhibition and its mannequins had not been so male-focused (the central image of the horse and rider reinforces this) and if greater discussion of the long attraction to horses and ponies by girls and women had been explicitly addressed. An exploration of the stories in âAt pony clubâ features a quote which concludes âhe is a better man all roundâ, while at least 90 per cent of the contributed pony club stories have been authored by girls. The horse as one of the vehicles of liberation for girls and women is neglected. The absence of any analysis of class in Australiaâs relationship with horses was also notably absent, as was an indication of horse numbers, how reliant on the horse was the economy of each colony and state, and was Australia unusual in this? How did the landscape and distances effect Australiaâs reliance on the horse. When did bicycles, cars and trucks overtake horse usage and ownership? When was Australianâs first-hand knowledge of the horse broken? These questions might also speak to a wider, international audience at a national museum.

The cultural, political, economic and social history of the horse in Australia provides a rich canvas: well, but not definitively portrayed in this exhibition.

Marion Stell is the author of a number of books on sport and a former curator. She is currently project coordinator in the School of Historical and Philosophical Inquiry, University of Queensland.