At the end of 2005, after months of delicate negotiations, the National Library of Australia announced the purchase of a previously unknown collection of 56 watercolours of botanical and ornithological subjects drawn and painted in Sydney in the years 1788-1790, the cradle period of European settlement at Port Jackson. Attributed to George Raper (1769-1797), a young midshipman on board Sirius, the flagship of the First Fleet, the watercolours had been held in England over several generations by the Moreton family. Unsigned and undated, the significance of these paintings had for many years gone unrecognised. Stored ignominiously and forgotten in an outbuilding on the Moretons' Tortworth Estate in Gloucestershire, this remarkable treasure-trove came to light in 2004 during a routine valuation of the estate of Basil Moreton, sixth Earl of Ducie. The sale to the National Library in Canberra was eventually negotiated with representatives of the present and seventh Earl, David Moreton, who was committed to honouring his family's long connection with Australia.

In his now famous account of the expedition to Botany Bay, published in London in April 1789 (the first of five narratives written by participants in the foundation settlement), Watkin Tench observed that 'to the naturalist [Australia] holds out many invitations'. He commented especially on the birds and animals, reserving his particular admiration for the birds to be seen in the immediate environs of the settlement. While not numerous, these Australian birds were present 'in great variety and of the most exquisite beauty of plumage'. Among them were 'the cockatoo, lory and parakeet' as well as birds of prodigious size, such as the emu, which occasioned Tench's special attention. And in the woods he commented on the presence of 'various little songsters, whose notes are equally sweet and plaintive '.[1]

George Raper's watercolours vividly demonstrate the way in which the curious men of the First Fleet responded to the invitations proffered by the natural environment they encountered as they began the task of building the new settlement in New South Wales. While some idea of the rich variety of birds, plants and animals was known already through the work of Cook's artists in 1770, nothing quite prepared the newcomers of 1788 for the puzzles and delights of the Australian fauna and flora they encountered around Sydney and its environs. And since no professional artists had been assigned to the First Fleet, it fell mainly to the naval men, trained in the art of chart-making and the drawing of coastal profiles, to construct a visual record that might serve as a prompt to personal memory or even as a resource that might find publication at home in distant England.

Among those officers and convicts who recorded their visual impressions on the journey to Australia and later in the settlement itself, George Raper is celebrated now as one of the most talented. Bernard Smith, the doyen of Australian art historians, has commented that Raper's work reveals a 'sensitive feeling for linear design and for the relationship of the image to the pictorial space'. In Smith's judgement, it is these qualities that see Raper, a mere 18 years of age when he left England, far surpassing all the other First Fleet draughtsmen.[2]Even so, in constructing his record, Raper may be seen now as touchingly reserved and modest. He probably began his earliest unfinished sketches as the Fleet sailed from England in May 1787, but it was not until his finished work of 1789 that he presumed to sign and date any of his pictures. Smith suggests that the impression Raper has left to history is that the work was drawn primarily for his own pleasure and interest and beyond that for his family and friends. Although he took pains to be an accurate observer, his work is not scientific. He made no attempt to describe or classify. Annotations are absent and only the most general of titles are employed. Raper's interest and pleasure is in novelty, to convey the delight he found in the shape and colour of the exotic birds and plants before him and to transform them into an effective visual design.[3]

While Raper's work is relatively well-known to scholars through previous holdings in the British Museum (Natural History), the Alexander Turnbull Library, Wellington, the Mitchell Library Collection in the State Library of New South Wales, Sydney, and the National Library of Australia (those purchased in 1999 from a descendant of the artist), these newly acquired paintings, now referred to as the Ducie collection, are marked by some special qualities. Having rested undisturbed and unrecognised for so long, the 56 works are remarkably crisp and fresh. Linda Groom, the library's Curator of Pictures, has drawn attention to their 'astonishingly vibrant state'. In Raper's depiction of the bronze-wing pigeon (Common Bronzewing), she has highlighted the artist's unusual and distinctive use of a glittering bronze paint to convey a sense of sheen on the bird's feathers.

Another aspect of this new body of Raper's work is the delineation it offers of the flora and fauna of a particular locality in Sydney, the area around the present-day Mosman Bay, known in 1789 as Careening Cove. Raper spent three periods in Port Jackson: from January to October 1788, from May 1789 to March 1790, and for a short period from February to March 1791. In the months of late winter into spring of 1789, Sirius was isolated for repairs and refitting in Careening Cove. The floral species Raper drew and painted are all spring-flowering. Absences in the collection are the summer-flowering callistemons and the autumn-flowering banksias, evidence which helps locate much, though not all, of this work to the location at Careening Cove.

Writing of the First Fleet artists in the 1980s, Bernard Smith commented on their collegiate practice, as they worked together in close proximity or sailed in the enclosed spaces of vessels at sea, exchanging notes and drawings and making copies. He noted then that this constituted a particular problem confronting those seeking to ascribe the many unsigned and undated works relating to the First Fleet to individual draughtsmen.[4] To this day, indeed, uncertainty remains concerning the identity of the so-called Port Jackson Painter. But since the time of Smith's pioneering foray into the interrogation of the art of the First Fleet (with his colleague Alwyne Wheeler and other scholars), some more definite conclusions are beginning to be drawn about authorship and influence. For a time Captain John Hunter, whose substantial book of sketches is also held in the National Library, was seen to be one of the definitive artists of the first settlement. Like Raper, this naval man also found delight in the antics and plumage of the native birds and in the charm and spectacle of the local flora. 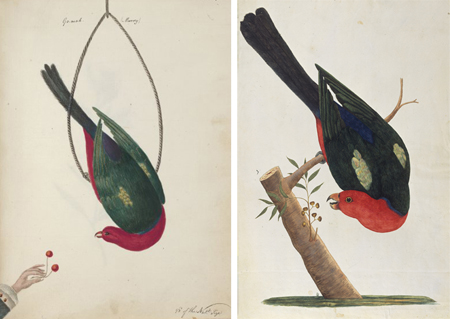 But for all of its rich interest as a prime document of the foundation settlement at Port Jackson, Hunter's sketchbook can now be seen to owe much to the superior talents of the young George Raper. In the evidence offered by the works in the Ducie collection, it is possible to see that the scholarly Hunter readily copied images he liked for inclusion in his own aide-memoire in much the same way that in a later age photographs would be promiscuously replicated for wide dissemination and sharing. While this of course was a compliment to the skill of Hunter's junior colleague, it is clear that more detailed comparative work is waiting to be done on the earliest European art made in Australia as well as on the dynamics of the social and professional relationships among the officers and personnel of the First Fleet. For the research potential of Raper's works, as well as their intrinsic delight, the National Library's new acquisition is to be celebrated and saluted.

1 Tim Flannery (ed.), 1788: Comprising A Narrative of the Expedition to Botany Bay and A Complete Account of the Settlement at Port Jackson by Watkin Tench, Text Publishing, Melbourne, 1996, pp. 72-74. 2 Bernard Smith, 'The Artwork', in Bernard Smith and Alwyne Wheeler (eds), The Art of the First Fleet and other early Australian Drawings, Oxford University Press, Melbourne, 1988, p. 205.
3 ibid.
4 ibid., p. 203.
Related links
> John Thompson> At the National Portrait Gallery: Art or history?
« back :: next »