Papers Exhibition reviews Book reviews Notes and comments
reCollections / Issues / Volume 5 number 1 / Exhibition reviews / Nick Cave: The exhibition
« back :: next »
Nick Cave: The exhibition
Why do I see exhibitions? Sometimes I'm swayed by the marketing hype (I'm a sucker for the 'blockbuster'). Sometimes it's the topic. But occasionally the pull is more personal, where an exhibition promises to reveal something of my history. And that's what drew me to Nick Cave: The Exhibition at the National Library of Australia.
If you are asking yourself 'Nick who?', or you have previously dismissed his work on reputation alone, I'd recommend a visit to the Western Australian Museum's slickly designed website about the exhibition. It offers a superbly packaged platter of stories, images, audio and video about the exhibition and the man himself. Subject aside, it is a standout example of the online environment being utilised to complement (and promote) an exhibition.
But what of the real thing? The prelude to the entrance was in the form of a small television hooked high on a wall, playing (at a sensible volume) a 60-minute loop of Nick Cave footage. I smiled at seeing a young, suited and ego-fuelled Nick Cave being interviewed by a Dutch journalist who was obviously a slave to the hairstyles and fashions of the eighties. The journalist seemed star-struck. Nick seemed to be toying with him. It was like a parody of a rock star interview. Perfectly Nick Cave. 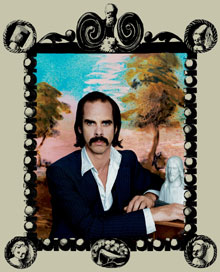 On opening the entrance door, bearing its polite warning that 'this exhibition contains material that may be offensive to some visitors', you come face to face with a stunning Polly Borland photographic portrait of Nick Cave, in a curling, swirling, decorative oval frame. Smaller templates of the frame surround the Borland piece, each with an image of unexplained relevance. These smaller frames are scattered like decorative confetti throughout the exhibition — an image of Marilyn Monroe here, an Emily Dickinson poem there, a penguin over yonder, and so on. They're amusing, but I wondered if they came from Nick himself. Or were they decorative noise dreamed up by the curatorial team? What were they telling me? That these were pivotal sources of inspiration? Or maybe he just likes Emily Dickinson poems and, well, penguins?
The introductory panels made it clear Nick Cave was heavily involved in this exhibition, supplying many of the objects after a 'moving, disturbing, inspiring and downright terrifying' enema of his personal collection. Thankfully, the curators also took advantage of the fact that their subject is a living one, and let him contribute his voice. This voice is in the form of snapshot 'stories' he wrote specifically for the exhibition, about certain objects or aspects of his life. What the stories offer is that holy grail of insight – straight from the horse's mouth, in the horse's own words. The first one I read was 'The story of the baboons, hyenas and the moose'. It's a beautiful piece — pain retold in palatable whimsy. I loved the ending:

But the one you don't want to mess with is the Moose. The Moose doesn't come often (he is trapped in the stairwell with his ridiculous antlers), but when he does you can hear his low hopeless bellowing reverberating around the house, and my wife collecting up the children and going 'Hush now boys, Daddy's got the Moose'.

When you're offered such tasty morsels, the 'curatorial interpretation' sharing the wall space becomes the bland wallflower. I was more inclined to follow Nick's voice through the exhibition.

My attention was next grabbed by a small, silver statue of Nick Cave, naked but for a loin cloth, astride a powerful rearing horse. The unfolding story is that this was the template for a much larger statue that was to be built and then, as part of a road-trip style television documentary, delivered by Cave to his birthplace of Warracknabeal, Victoria. The sculpture never went ahead, and all that remains is the template and the cheeky idea — but it crossed my mind that the people of Warracknabeal should perhaps return the favour, and start working on a large statue of their own (perhaps of Nick astride a moose) to ship back to their long lost son's current home in England. 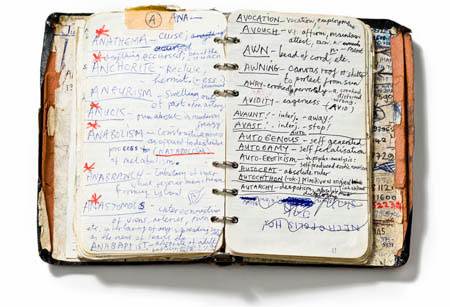 The exhibition space was broken into separate 'rooms' leading off from a wide central corridor, flanked down one length by a gallery of photographs. The 'rooms' were loosely themed, and the first one I entered I would describe as the 'early period' — the Nick Cave I remember — emerging in Melbourne as the lead singer of The Birthday Party and moving on to Nick Cave and the Bad Seeds. A small television showed grainy footage of early performances. I watched and listened for a few minutes but, in truth, as I stood there completely sober and a few weeks shy of 40, this early music no longer spoke to me in any way. For me, the shiny stars in this room were the first of many examples of Nick Cave's handwritten lyrics. His loopy, fluid, erratic scrawl spills with seemingly controlled ease onto any scrappy bit of paper available to catch it. And with the words silent and trapped on paper, stripped of all melody and performance, you have time to study them closely. They can be bizarre, dark, violent and completely nonsensical, but there are generous smatterings of humour too. 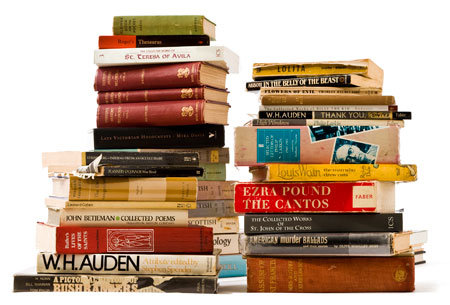 Another space in the exhibition was loosely structured as an 'office'. There's a desk where you can view more of Nick's notebooks and diaries. There are bookcases displaying a selection of titles (self-conscious in their diversity) from his personal library. There's The Sacred Heart of Jesus, the white bust that appears with Cave in the opening Borland image and an object he holds dear. There's also a cabinet — and it's a 'naughty' one. Open the top drawer and you find another of Nick's notebooks: the sacred and profane notebook. This is scrapbooking, Nick Cave style. Take a collection of pornographic drawings and some pictures of saints, and carefully fix them juxtaposed to each other because, at the time, Nick found 'an extremely pleasing relationship existed between these two things'. You expect to see something like the sacred and profane notebook in a Nick Cave exhibition. Ironically, what is more surprising, despite their famously unlikely collaboration, is the presence of a worn vinyl 'Kylie' bag (as in our pop princess, Kylie Minogue).

After the 'office' space, there are more handwritten lyrics, posters and a look at the work that went into his novel, And the Ass Saw the Angel. By then my eyes were on the end space, darkened and flickering with the promise of more documentary video on a big screen. It turned out to be a 117-minute loop of footage. 117 minutes! I hadn't planned on a movie-length screening and so I, like many other visitors I suspect, watched a snippet and then walked away wondering what I might have missed. It was annoying. I like my audiovisual in bite sizes — at least then I can pick and choose what to ingest.

I spent my last half hour in the exhibition looking at the vast collection of photographs on display. This was a beautiful collection of images, from various photographers, taken throughout Nick Cave's career. They captured his moods, poses and performances. Stunning.

As I wandered to the exit door, mulling over what I'd seen and what I'd write about, the final little decorative frame to the left of the door caught my eye. And what was in it? A picture of a moose.
My final impressions? I loved the photographs. I loved seeing the handwritten lyrics and notebooks. And I loved his story thread. But often I was left wondering what the hell was he thinking, what was going on in his life (or what was he taking) that would generate a particular song or work? The exhibition brochure spruiks that it's 'insightful and playful' — for me it leaned more to the playful. It seemed to only scratch the surface. Maybe it's impossible to get the answers I was seeking, because who can explain the magic and mystery behind imagination and creativity? Perhaps the curators tried to delve deeper but found that it was a journey Nick Cave didn't want to take – the price of obtaining insight may have been influence.

As I walked out, there was a sign asking visitors to fill out a survey form and be in the running for a 'Nick Cave gift pack'. The mind boggles. I hope I win — and I hope the prize is a picture of a moose in a Kylie bag.

Michelle Phillis is a project officer with Medicare Australia and former editorial assistant, reCollections: A Journal of Museums and Collections.