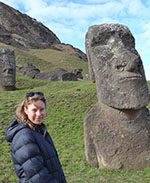 Katherine Aignerâs ethnographic film experience started when she took a Super 8 camera to central Kalimantan (Borneo) in 1991 to record ancestral rituals of Dyak tribes. In 2001 she travelled on a political, cultural tour of England, Ireland and Wales with Aboriginal activist Isabell Coe, which included a fire ceremony in the ancient fire temple of Saint Bridget, Ireland on 11 September. She has worked with Indigenous knowledge-holders and custodians around Australia and overseas and has made educational documentaries on preserving cultural heritage, including the award-winning Australian Atomic Confessions (2005).

She has worked as an assistant curator at the National Museum of Australia and is currently an associate curator at the Ethnological Museum of the Vatican Museums. A doctoral student at the National Centre for Indigenous Studies at the Australian National University, her research focuses on the late north coast Bundjalung custodian, knowledge-holder, filmmaker and activist Lorraine Mafi-Williams (1940â2001), who held the cultural knowledge of the Ngarakwal (Knarakwal) people of northern New South Wales and southern Queensland.